10 Ghost Towns to Visit on Your Motorcycle This Halloween 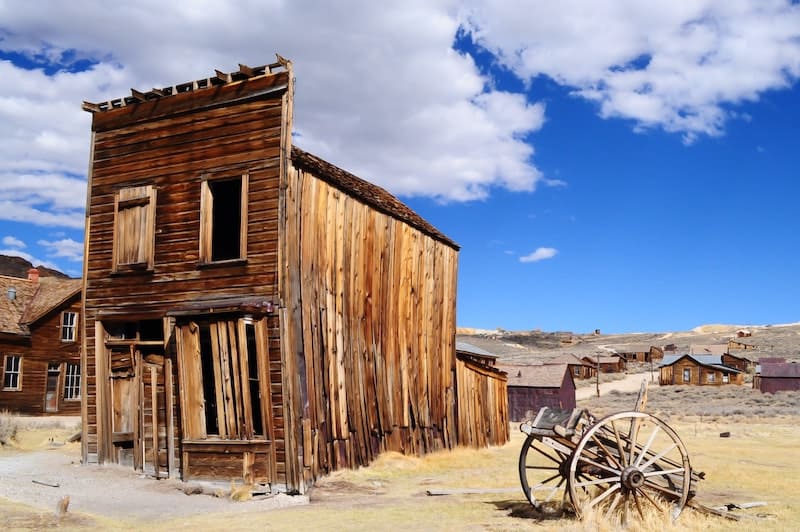 In the spirit of Halloween, we created a ghost town travel guide that encourages motorcyclists to forego the haunted houses in favor of traveling to real American ghost towns. These ghost towns offer unique opportunities to visit historic landmarks and abandoned buildings frozen in time with intriguing histories, little to no traffic, and minimal competition for killer photo sessions. Best of all, each one of these historic sites is surrounded by terrific motorcycle riding opportunities. Adventurers often say a great journey is more important than the destination itself. This ghost town, halloween, travel guide proves you can have both – assuming you don’t fear what goes bump in the night.

We’ll start our spooky travels with the most remote location on our list - the Kennecott Mines National Historic Landmark near McCarthy, Alaska, within the expansive Wrangell-St. Elias National Park and Preserve. Developed in the early 1900s, many of the original buildings of the abandoned copper ore mill in Kennecott still stand tall even after a handful were taken down and pillaged in the 1960s.

Cyclists can visit this once-booming ghost town by riding along the scenic Edgerton Scenic Byway past Kenny Lake to the small town of Chitina. From there, it’s a 65-mile ride using the minimally maintained McCarthy Road, a washboard, and pothole-ridden gravel road that offers grand views of mountains, glaciers, and lush forests

The spookiest thing you’ll need to consider is the distance from the closet civilization in Chitina, so make sure you have enough food, water, and supplies to contend with the weather, potential breakdowns, and unexpected wildlife encounters – all things that embody the spirit of the wild west.

The second ghost town for your Halloween thrills is the haunted mining town of Jerome, Arizona. Jerome was mined for malachite and azurite long before Europeans settled in the Americas, and the United Verde Mine kept that pursuit alive from the early 19th century into the 1950s with the extraction of ore-bearing copper, gold, silver, and other metals.

Located between Prescott and Sedona, Jerome is a quirky tourism spot that has been on the verge of being torn down on multiple occasions, but local residents have turned the once crumbling town into a thriving tourist destination. One of the most intriguing attractions is the haunted Jerome Grand Hotel, formerly the United Verde Hospital, where more than 9,000 people died throughout the mining town’s history. This ghost town comes to life during Halloween with a bunch of spooky events.

Aside from a spooky place to lay up for the night, the areas around Jerome offer expansive desert riding opportunities, as well as easy access to the mountainous national forests surrounding the old mining town.

If you’re looking for a ghost town destination with access to an assortment of exceptionally beautiful landscapes, then you should consider traversing your way to Bodie, California, a boomtown and National Historic Landmark known for its rise and fall with a local gold rush in the area. Bodie began its ascent to mining town glory in 1859 and enjoyed a long, profitable history until its decline in the early 1900s before finally closing down for good in 1942.

Located on the fringes of the Sierra Nevada Mountains, Bodie is only an hour away from the awe-inspiring Tioga Pass, one of the best drives in the country, which leads visitors into the grandeur of Yosemite National Park.

Temptations for shoplifting are plentiful within this ghost town left in arrested decay. A local legend says anyone who steals from the former mining town’s abandoned buildings, many of which are still stocked with supplies, will experience a streak of bad luck in the near future until the item is returned.

Motorcyclists in search of another haunted destination should look to St. Elmo, the best-preserved ghost town in Colorado. Once rich with a booming silver, gold, copper, and iron mining scene dating back to the late 1800s, this abandoned ghost town is now rich with paranormal activity. Within the Home Comfort Hotel, a hotel built with the rise of St. Elmo, can be found Annabelle “Dirty Annie” Stark, a woman who spent her life in the mining town and whose spirit persists to protect the entire encampment from unwelcome intruders. You'll get all of your Halloween chills and thrills from this haunted ghost town.

Though there are innumerable riding opportunities in the surrounding mountain landscape, the most immediate roads are Highways 24, 29, and 285 scenic byways. These highways will lead you from one national forest to the next in a seamless series of gentle curves and short straightaways for endless motorcycling fun.

Riders looking to get their feet (literally) wet in a different landscape should consider the ghost town of Flagstaff Village, Maine, as their next destination. Originally settled in the early 1800s, Flagstaff Village developed into a tight-knit community with a gristmill and sawmill as the core of the town’s economy. However, the need to consolidate hydroelectric power in the region saw the creation of a dam that ultimately led to floodwaters submerging the once-thriving little community.

Today, visitors using the portion of the Northern Forest Canoe Trail that traverses Flagstaff Lake can look down and still see the creepy remnants of several buildings whose owners refused to relocate them before the dam’s construction. Along with the numerous water bodies that can be visited nearby, motorcyclists can enjoy rides through the rolling mountainous terrain that mark the northern reaches of the Appalachian Trail.

The wild west ghost town of Bannack, Montana, is a terrific destination for motorcyclists in search of remote riding in the lower 48. Established in 1862, Bannack was the result of a gold rush that lasted into the twentieth century with the last residents ultimately leaving in the 1970s. Bannack was declared a National Historic Landmark in 1961, and sixty abandoned buildings remain standing to this day for visitors to explore.

Terrific riding opportunities can be found in the endless network of local backroads as well as the Pioneer Mountains Scenic Byway that gives riders a chance to explore southern Montana in relaxation. Yellowstone National Park and several national forests are all within a few hours of Bannack as well.

Fontana Lake, the result of Fontana Dam, ultimately submerged Proctor and isolated it from other nearby townships as the lake also washed out Highway 288, the only roadway connecting the former lumber town to neighboring communities. This lost town’s remaining structures are only accessible via Fontana Lake or an exceptionally long hike through the Great Smoky Mountains National Park.

Motorcyclists looking to maximize their time in the local vicinity should go see the famed "Road to Nowhere" and make a point to ride down the famed Tail of the Dragon, the notorious roadway known for its 318 curves in 11 miles and majestic scenery.

If desert riding is what you want, then Terlingua, Texas, is another highly recommended ghost town destination. This mining town was built up in the early 1900s as a result of discovering significant amounts of mercury ore. Mining operations ultimately died out in the 1940s when the major mining companies went bankrupt.

Terlingua is still a popular tourist destination with its main attraction being two annual chili cook offs simultaneously held on the first Saturday of November. The best motorcycling in the region can be found at Big Bend National Park and Big Bend Ranch State Park.

Motorcyclists seeking another option in the Appalachians should visit the coal mining ghost town of Thurmond, West Virginia. Thurmond was incorporated in 1900 and saw great success during the peak of its coal mining operations, but it now houses a mere 5 residents. This ghost town is now owned by the National Park Service with its restored and operational train depot serving as a visitor center for New River Gorge.

The best motorcycle route in the immediate area is a loop around the entire New River Gorge National River, which should include you riding on the famed New River Gorge Bridge. Riders willing to put in a little extra seat time should make their way south through the expansive Monongahela National Forest to the renowned Blue Ridge Parkway less than a few hours away.

Last but not least, the ghost town of South Pass City, Wyoming, is a destination worth visiting if you enjoy the iconic imagery of the wild west. Though hyped by prospectors in search of outside investments, South Pass City was never more than a flash in the (gold) pan after being established in 1867. The encampment experienced several surges in activity to the point of having over 250 buildings, but the expenses and difficulties in actually recovering the gold proved too costly, so the boomtown experienced a quick decline into a ghost town in a few years.

Today, visitors can walk through an assortment of abandoned buildings including former restaurants, cabins, dance halls, a jail, and a “night-shift” gold mine tour complete with Scotch tastings. The best motorcycle riding can be found within the Red Canyon Scenic Area as well as the backroads surrounding the Wind River Mountains just north of South Pass City.

Are you feeling creeped out yet? We hope these 10 abandoned ghost town destinations inspire you to get out on your motorcycle this October while it’s still warm enough. These forgotten, historic sites, still deserve to be remembered and appreciated, and we hope you take the time to travel somewhere with a glimpse into history, while enjoying the great rides around these scary locations. Spooky rides aren't your thing? Check out the best motorcycle rides in your state.