In our heart of hearts, as Harley-Davidson motorcycle fans, we know it’s all about the look, the sound, and the feel of an unmistakable ride. But, what happens when all of that suddenly changes?

Trade in for a Harley the easy way, get your free cash offer.

Want to trade for a new ride? Trade in or sell a motorcycle for cash to a ready buyer!

Since 1991, the Harley-Davidson Dyna, with its exposed conventional units straddling the rear fender strut, has been the stiff-chassis middle child of the Harley family, along with four other motorcycles in the lineup: The Softail (FLS), The V-Rod (VRS), Touring (FLT), Sportster (XL). The Dyna debuted as a limited production model, the FXB Sturgis in 1991. Since Dynas feature tubular steel frames and are designed for twin external rear shocks attached to a double-sided swingarm, the chassis was soon determined to be better suited for the Evolution engine, and soon replaced the FXR by 1995. The Dyna has been near and dear to our hearts ever since.

That is until the 2018 Harley-Davidson lineup was announced, and the Dyna is no more. As Harley-Davidson announced on Tuesday, the name of “Softail” is now what encompasses all Softail and Dyna models. That’s right. As this year, we will no longer see the production of our beloved Dynas. Now, they are listed as Softails.

While Softail is a familiar name, what will be called “Softail” in 2018 is entirely different than what we’re used to.

What’s New with the 2018 Harley Softails?

The frames of these 2018 Softails lost weight all over the place. All in all, the redesign of the all-new frame reduces total weight by up to 35 pounds, but the weight loss wasn’t all just to the frame. Aluminum pieces were used in places like the fender struts and triple clamps in place of steel, while 13 pounds were taken off the wide chassis, and narrow chassis lost 18 pounds.

The weight-loss was done to increase speed and agility, and improve such things as handling and braking. And, as Harley-Davidson claims, these guys are 10 percent faster from 0-60 than the previous High Output Twin Cam 103 engine.

You have to wonder though, even though the lighter weight was meant to make these babies fly a little faster, the reduction of fuel capacity means that ride time won’t be as long. As expected, such weight loss will be most noticeable to those who know these models best on the road.

The redesigned mild-steel tubular frame is stiff, 65 percent stiffer in fact, than the outgoing Softail frame. This new frame has 50 percent fewer component parts, 22 percent fewer welds and, with the solid-mount engine, makes for an overall 34 percent more rigid chassis. 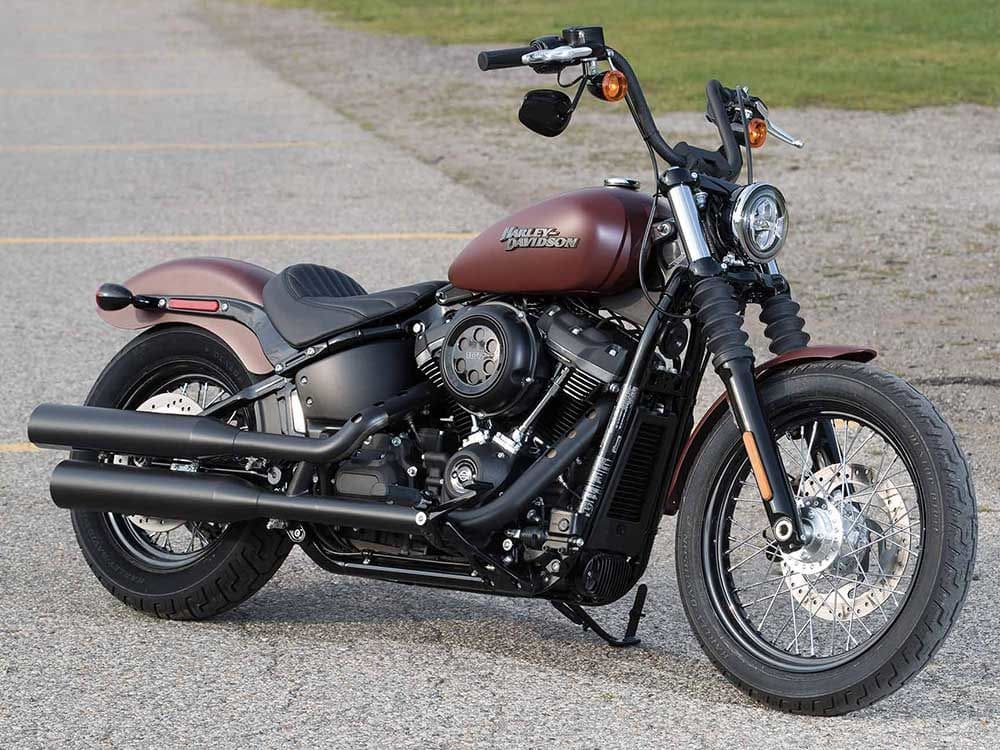 Photo Source: Hot Bike Web
They have a different engine.
As I said before, these guys are gonna fly. And, with the Milwaukee-Eight engine on these 2018 Harleys, that’s gotta be expected.The chassis on the previous Harley Davidson Dyna was not able to handle the power of a Milwaukee-Eight, so Harley did something they do best and put their genius to work. Along with designing an all-new Softail frame with a new under seat "hidden" mono shock, the revamped chassis for the 2018 is now equipped to handle such modern power and performance of the Milwaukee-Eight engine. Dyna models previously had rubber-mounted Twin Cam 103ci and 110ci engines, but the new models will have engines that are hard-mounted to the frames like the Softail before. This new design features the four-valve-per-cylinder Milwaukee-Eight 107ci V-twin with dual counterbalancers to cancel primary vibration, so you're more comfortable and don’t get rattled to death.
They’re pricey.
The price tag on these guys is a little bit overwhelming. But with so many options now coming standard on the 2018 Softails, HD must have thought that the higher prices were justified. Motorcycle tech gadgets and amenities such as the all-new Daymaker Signature LED Headlamps, keyless ignition, security, and USB charging port near the headstock are all standard now. It all depends on what you really value as far as upgrades to the new Harley lines, and how much of a price hike you’re willing to take for it all.

Photo Source: Hot Bike Web
All in all, such a shakeup in the Harley family kind of boils down to whether or not you welcome change or not. There are upsides and downsides to it all, but it goes without saying how sorely we will all miss the Dyna name. I’ll just leave it to you to choose whether or not you love the new kid on the block.

All RumbleOn powersports and used motorcycles for sale come with a full Condition Report, are shipped straight to your doorstep as-promised or your money back, and with a 90-Day Mechanical Guarantee!