KTM motorcycles: Staking their hold within the motorcycle industry

When you hear the brand KTM, the first thing that comes to mind is their off-road options. While they’re not an American company they’re making waves over here within that style of riding.

They’re continually providing fantastic off-road options that can compete well with brands like Yamaha, Honda, and Suzuki, all of which also dominate the off-road sector.

And while they’re familiar with their standard motorcycle forte, KTM has been dipping their toes into other flavors of riding, which can be seen with bikes like their Super Duke. Every new arrival further proves that KTM is not a brand to diminish, and could really make waves within the industry. This point is even bolder with their new bike launch, the 2018 KTM 790 Duke.

The first impression of this ride? It’s slick, has artistically clean lines, and looks like it means business. Maybe this bike style isn’t really your thing, and that’s okay. But I think everyone can appreciate a cool-looking ride when they see one. So, with that, this is one cool-looking ride. It’s sporty but still manages to hold its own because of the design. It looks like it’s got one foot in off-road territory, but seems like it’s inspired by past adventure bikes, too. It’s a love child, and I like it!

It has a parallel twin engine instead of a current crowd favorite, which is a V-twin. This was to help with the bike’s look, design, and cost. This bike weighs in at 383 pounds, and to say that it’s a fun ride because of its flat torque would be just a bit of an understatement. You can hit 100 mph very quickly (not that I’m saying that you should), but it’s the thought that counts, right? This bike is going to be an excellent option for those who really prioritize speed because it doesn’t have an issue with hitting it.

It’s a short bike, as well as a light one. It’s effortless to handle, and when you have a ride that loves speed as much as this one, that’s a priority. Because of its size, many might think that this is a bike that can only handle smooth pavement. However, it has the ability to tackle a variety of different road variations and won’t slow when you start hitting some questionable roads. It has ABS, which seems to be a default in today's industry. And while it might not have the look of a common, everyday ride (but, really, what does?) it’s a more logical option than others would assume. It has a 3.7-gallon tank, which can handle about 150 miles before having to be filled again. 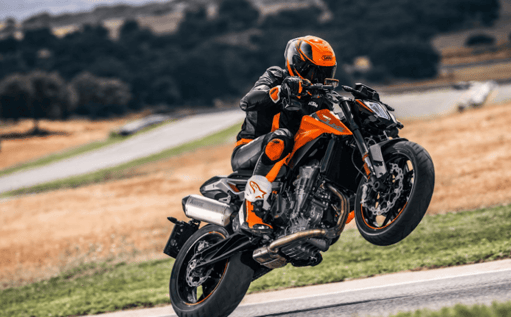 The 790 Duke is an awesome ride for different heights, too, which wasn’t originally expected. Because of its light frame, it could be assumed that this bike caters more to those who are smaller in height and structure. However, it seems that taller riders don’t have any difficulties with this bike, which should provide a thumbs up in the versatility sector. It has the LED lights you would expect, along with an illuminated menu, but it doesn’t try to overcomplicate things.

It’s easy to customize, which means if you want to add some KTM luggage options for the longer rides, you can. Sure, the seat might not have the comfort of a throne, but it’s surprisingly comfortable. The parallel-twin engine produces 103 hp and 63.6 pound-feet of torque. It’s a bike that doesn’t mess around, and it's also competitively priced.

If there’s one area that this bike is sure to shine, it’s with the millennial audience. It’s a sporty-looking bike that can be customized for longer rides, has no issue with gas, and comes with a price that could be considered easy on the wallet. I believe the more bikes, the better. And while everyone has a special place in their heart for American brands, it’s always fun to appreciate the competition. One thing that’s for sure: KTM is a force to be reckoned with.