Does ABS make motorcycles safer to ride? Is it worth the investment?

ABS motorcycles, or motorcycles with anti-lock braking, have become increasingly popular over the years. Which makes sense considering cars and trucks come standard with it.

But while many riders are eager to test out the capabilities of this motorcycle feature, some are still not convinced ABS is necessary.

Want to sell your motorcycle without ever leaving the couch?

RumbleOn is committed to providing the best customer experience, which is why our cash offers are available 100% online! Find the cash offer for your motorcycle in comfort and confidence today.

Whether you’re a seasoned rider or just starting out, ABS comes with its own set of advantages and disadvantages. Riders who prefer the “naked bike look,” for example, worry that adding an ABS unit will interfere with their bike’s bodywork, functionality, and aesthetic, while others with frugal pocketbooks aren’t sure ABS is truly worth the investment.

Before we delve into the pros and cons any further, though, let’s start with what ABS is and how it works.

What is ABS on a motorcycle?

Simply put, ABS on a motorcycle prevents your motorcycle brakes from locking and your tires from skidding. They operate the same way as traditional brakes, only braking will happen more rapidly when ABS is engaged. 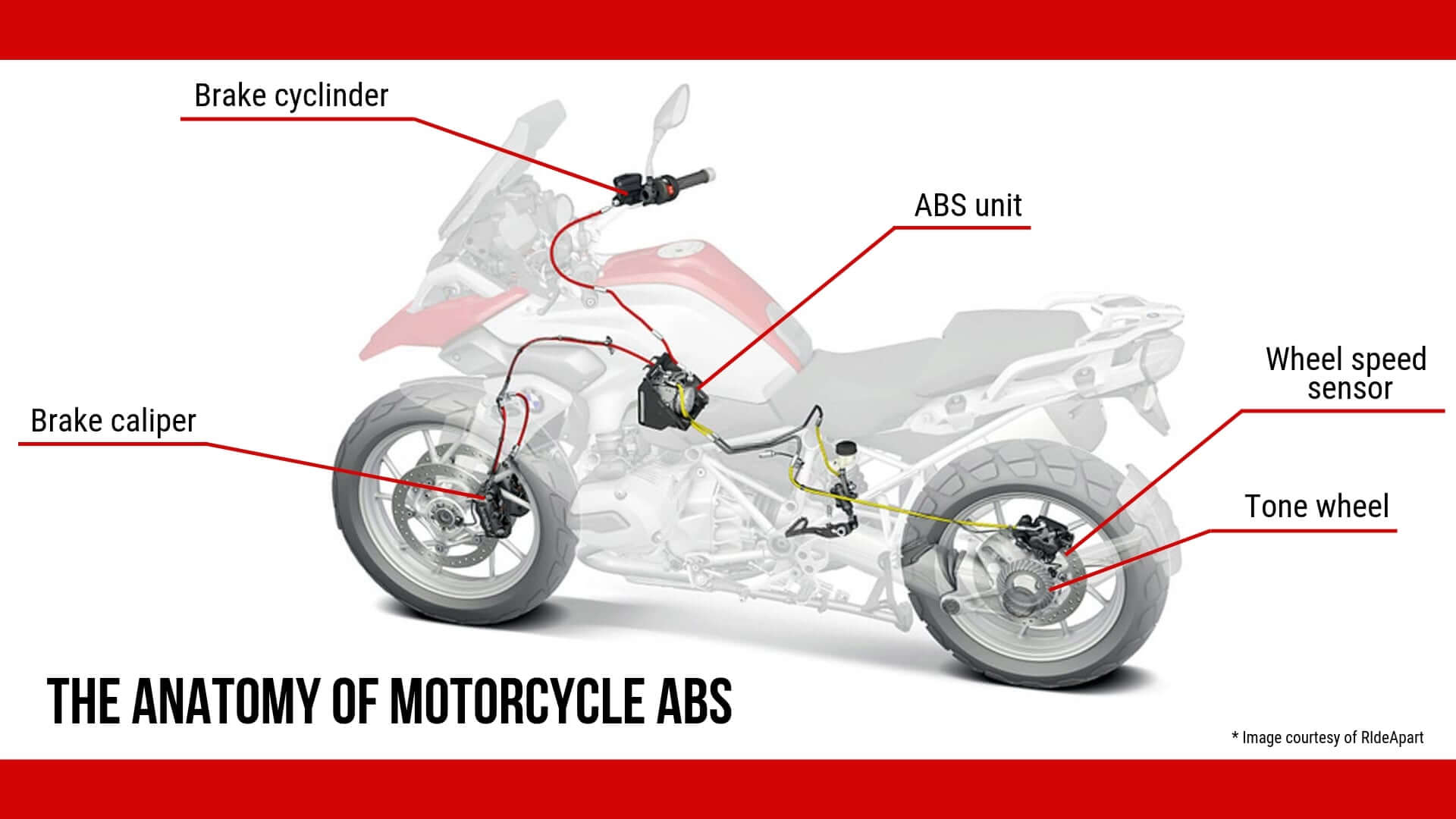 A standard ABS unit works by measuring the frequency of signals sent by a magnetic sensor in the “tone wheel” of a motorcycle.

If there is a dramatic change in the frequency of these signal pulses — i.e. when the motorcycle brakes are being applied — the ABS unit begins to engage by slightly decreasing the pressure applied by the brake system to allow the wheels to spin. It then reapplies the braking force. ABS will repeat this action as long it detects a locking situation.

Thanks to ABS, riders can significantly reduce their stopping distance and avoid potentially life-threatening situations. According to the Motorcycle Legal Foundation (MLF), “The intelligent [ABS] module reads the pulses up to 100 times per second, and can adjust the braking system pressure 10 times per second. It reacts far faster than most people’s reflexes can.”

To see ABS in action, take a look at the video below:

Misconceptions about ABS and motorcycle safety.

One of the biggest misconceptions that many riders have when it comes to anti-lock braking is that it will automatically make them a safer rider. If you’ve ever taken a motorcycle safety course, then you know this isn’t necessarily true.

“At the end of the day, even if having ABS is generally safer than braking without, you never want to use anti-lock brakes as a crutch. Just as they are a backup safety feature in an automobile, that is all ABS acts as on a motorcycle, a backup in case of an emergency stop.” (NADAGuides)

While having ABS can bring peace of mind, it is not the end-all-be-all to preventing fatal motorcycle accidents. Yes, it does help reduce the risk of injury when riding conditions become unsafe — like when a motorist stops or pulls out in front of you unexpectedly — but it is still the rider who is responsible for ensuring motorcycle safety.

Can I install ABS on my bike?

Yes, you can, and it’s easy to do. If you’re interested in installing ABS on your motorcycle, first think about your a) skill set, and b) riding preference. If you’re a beginner, ABS is excellent insurance while you’re learning how to brake. But if you anticipate riding off-road where friction is basically nonexistent, ABS might not be worth it.

While some worry that an ABS unit will add too much weight or gaudiness to their bike, the newest ABS systems for motorcycles weigh as little as 1.5 pounds, and they’re small enough to be completely concealed by your motorcycle’s bodywork.

Are ABS motorcycles worth the extra cost?

ABS is a personal preference. Even if you don’t feel an overwhelming sense of self-preservation, you still have a moral obligation to respect the safety of those around you. And that’s exactly what ABS aims to do in those unexpected, often unavoidable, situations.

According to the Insurance Institute for Highway Safety, fatal crashes on a motorcycle are 31 percent lower when motorcycles have ABS. By the same token, the Highway Loss Data Institute reported that accident insurance claims for motorcycles using ABS are filed 20 percent less often than for motorcycles without ABS.

These are pretty convincing figures if you ask me.

Buy used motorcycles and other powersports vehicles from RumbleOn.

The best place to sell your used motorcycle is RumbleOn. Why? For starters, you can get your quote from anywhere! We also fill out all the paperwork and pick up your motorcycle. Sell your motorcycle with confidence by selling to RumbleOn.