A Beginner’s Guide to the 2021 Dakar Rally Raid 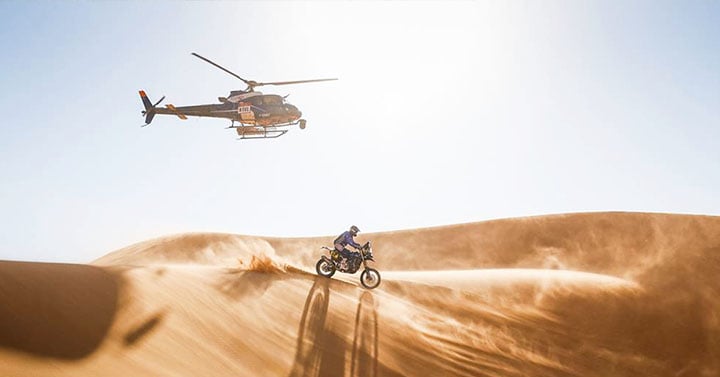 The Dakar Rally Raid, originally the Paris-Dakar Rally, is an off-road motorsports competition that pits the world’s greatest competitors against one another in the harshest desert landscapes around the globe.

The Dakar Rally is one of the greatest sporting spectacles in history, and yet it’s one of the least watched sporting events due to its remoteness. Millions of people around the world eagerly watch the short video clips that are broadcasted daily, but there’s only so much that can be seen as the participants are sent into some of the most rugged, inhospitable locations imaginable.

Known to have a lethal history, the Dakar has been fine-tuned to reduce severe injuries, but the potential for severe crashes is never more than one miscalculation away. Riders often average speeds above 70 mph for hours on end for two weeks straight. For 2021, the 43rd edition of the Dakar Rally, the course has been intentionally delineated to reward riders’ technical abilities rather than each machine’s raw performance capability. With a couple more days of competition remaining, this year’s rally has already shaped up to be one of the best with heated competition and plenty of surprises.

Since its inception, the Dakar Rally has always had a consistent format with minor changes along the way to keep the event in good taste with the contemporary world culture. The race is stretched across 10-15 days of competition that takes the competitors through some of the most rugged terrain and remote landscapes in the world. This year, there are 310 participants spread across the 6 categories – motorcycles (101), quads (16), UTVs (61), cars (64), trucks (44), and classics (24) – that will compete in a 1-day journey.

The race includes the prologue and 12 stages with both the start and finish lines in Jeddah, Saudi Arabia. Though Saudi Arabia hosted the Dakar Rally in 2020, this year’s race is a completely new route with an extensive portion running along the Dead Sea – a harrowing call back to the rally’s lethal history.

The 2021 Dakar Rally Raid schedule is as follows:

Each competitor’s start time for each successive stage is determined by his or her performance on the preceding day. It’s not uncommon for participants to go all day without seeing another competitor. It’s also not uncommon for navigational issues to cause competitors to unexpectedly group together. By the time the final two days of competition come around the leaderboard will have been established for a high-energy finish that will keep competitors and fans on their toes until all the top participants have crossed the finish line.

Certainly, the Dakar Rally is a race pitting the best motorsports competitors in the world against each other, but it’s much more than that. Perhaps, the most difficult challenges lie in overcoming the elements. The Dakar Rally is intentionally situated in one of the most grueling and hostile landscapes imaginable for more than two weeks. The rugged, desolate landscape takes pity on neither man nor machine, and only the strong survive.

The most common struggles racers must overcome include vehicle damage and failure, navigation error, extended exposure to scorching heat, unfamiliar and unforgiving terrain, mental fatigue and physical exhaustion, and poor nourishment. By the end of the event, each competitor has been taken to the brink of his or her endurance and determination.

However, these issues are not exclusive to the participants. At each new stage, a small city is essentially torn down and erected at the next location. The extensively detailed logistics and endless number of resources required to put on such a large event is unfathomable for those who have not participated. The fact the Dakar Rally is an annual event is mightily impressive. Sure, practice lends way to perfection, but Dakar Rally Raid organizer Amaury Sport Organisation (A.S.O.) deserves a ton of credit for its resilience and ability to plan and coordinate the rally every year. 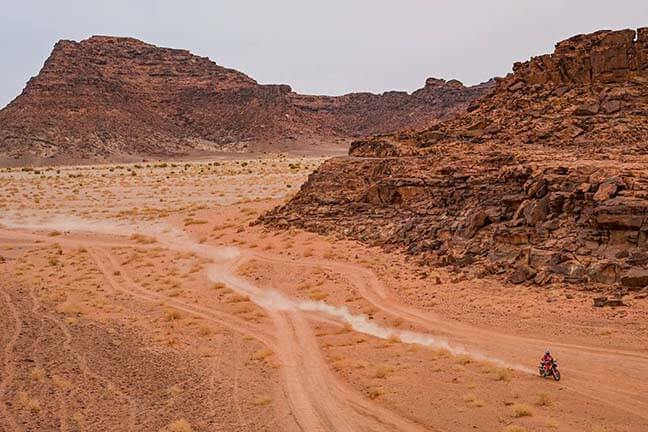 Of course, there is no such thing as the Dakar Rally Raid without unexpected challenges. This year, A.S.O. was forced navigate a new series of hurdles with COVID-19 coming into play. In fact, there nearly wasn’t a rally this year due to late COVID concerns. Saudi Arabia’s government implemented a last-minute shutdown of its borders on December 21st. A.S.O. stepped in the next day and reassured the host country the proper precautions are being implemented including chartering private planes for participants, extensive COVID testing, and route changes that would minimize the rally’s impact on Saudi Arabia’s citizens. Fortunately, the rally was able to meet its scheduled start date.

Furthermore, the pressure to make the rally more eco-friendly has been building the past several years, and A.S.O. has taken major strides to meet the demands. This year, solar power is being introduced where feasible, less waste is being generated in an assortment of efforts to maximize efficiency and reduce local impact, and a foundation is being laid that will pave the way for exclusively hydrogen powered vehicles by the year 2030. In a landscape that offers little more than varying shades of brown, the Dakar Rally has a fresh green streak that is sure to grow in the coming years as new technologies and commitments to become carbon neutral foster a new-age competition with reduced environmental impact.

Typically, the favored competitors are those who are on factory teams. Factory racers have already proven themselves as great competitors with the skills, mental fortitude, and resources to put them into contention to win. They’ve earned podium finishes in other rallies around the world, and they’re professionals in every sense of the word. However, the Dakar Rally is founded in creating a level playing field that doesn’t favor anybody except the one who can get from point A to point B the fastest. Amateurs from around the world consistently take part in the race, and they often perform admirably well with many of them garnering partial or complete factory representation during the next Dakar event.

This year, some of the big-name favorites in the motorcycle class include several former winners. Reigning champion and American, Ricky Brabec, hopes to solidify back-to-back first place finishes. Former two-time winner and Aussie, Toby Price, seeks to bring the title back to Australia for a third time. Last but far from least, the steady Englishman, Sam Sunderland, hopes to outclass his factory teammate in Toby Price to earn his second victory. Nevertheless, it only takes one small mistake to send a team packing, and it could be a no-name independent rider who goes home a champion.

The Spirit of Dakar

Worth noting is the camaraderie that is shared between everyone. No matter your machine, team, nationality, or role in the event, anyone who makes it to the final day deserves credit for earning his or her stripes. This shows through on the race course as well with potential podium finishers known to stop and help another competitor when a bike is stuck in the sand or a fellow rider becomes injured. It’s not uncommon for first aid to be performed on an injured competitor by another participant until medevac arrives.

As much as the Dakar Rally is about overcoming hardship and winning motorsport’s ultimate race, it’s also about lending a helping hand to complete strangers so everyone can cross the finish line. This year is no different, and after a tumultuous year that tested the spirit of our global society, there’s no better way to start the new year than watching motorsport athletes come together from around the globe to compete and take pleasure in a shared struggle they’ll all get through together.

With determination from Amaury Sport Organisation, all the competitors, and host country Kingdom of Saudi Arabia, the 2021 Dakar Rally Raid has already proven to be one worth remembering.

Avid Dakar fans and curious motorsports enthusiasts around the world can live stream the race and watch same-day highlights through an assortment of networks.