Best places to see fall leaves in the USA.

What’s the best part about fall? Halloween? Cool, crisp days? Pumpkin beer? Everyone has something they love about the fall season, but one of the most popular fall-time features is watching the leaves change colors. And, imagine doing it while on a cool, smooth ride through the country! Sheesh, you better believe it’s amazing. 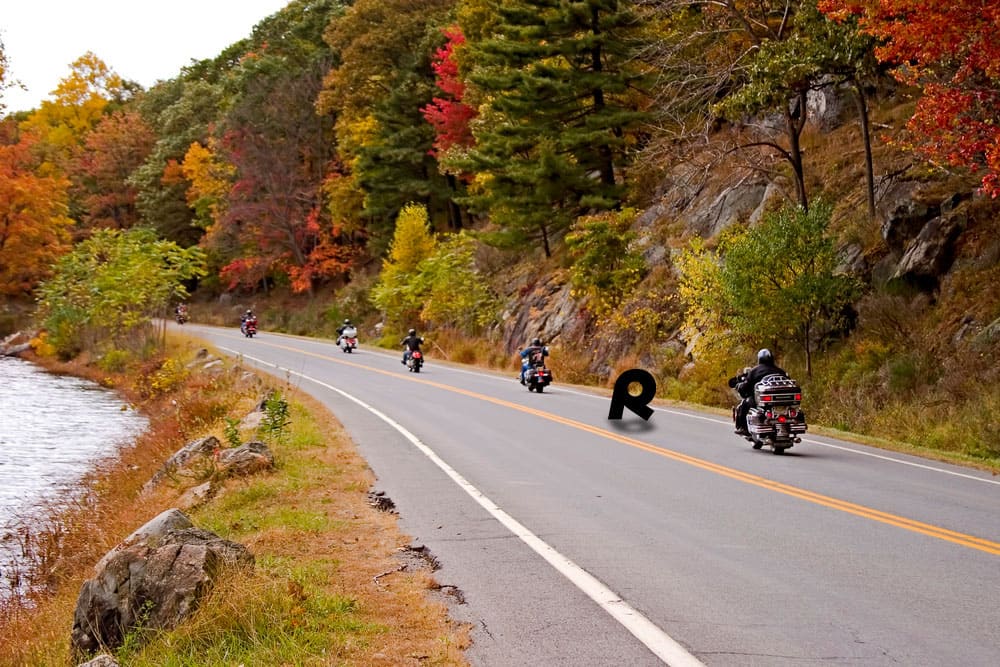 Here’s my list of the best places to see fall leaves in the USA:

Cadillac Mountain, Maine
One of my favorite rides is crisscrossing the state of Maine in the fall. Seriously, the state has everything. Mountains, ocean, forests, rivers, and interesting towns. One of the must-see spots in Maine is, of course, Cadillac Mountain in Acadia National Park, Bar Harbor. You’ll see fall leaves that are so pretty it will leave you breathless.
Best motorcycle route: Bar Harbor Cadillac Mountain Summit Road
(Shown highlighted in pink)

Columbia River Area, Oregon
Mid-September to mid-October provides some of the best fall foliage views along the Cascade Mountain border between Washington and Oregon. The Columbia river stretches for eighty miles, and is lined with many different types of trees that are more than worthy for a photo op. (Note, this area has experienced some damage due to wildfires.)

The Adirondack Mountains and Lake Placid are renowned for their autumn colors. The best time to take a ride through this awesome area is early to mid-October, which conveniently coincides with the Lake Placid Brewfest. (Woohoo!)

Take a slow, scenic ride through some of the most beautiful areas of Virginia this fall. Besides the farms and fields, the gentle rolling hills will be alive with fall colors. With low speed limits, you’ll be sure to not miss a bit of it.
Best biking road: Middleburg to The Plains Loop
(Shown highlighted in pink)

The Catskills is an area that measures 6,000 square miles in southeastern New York, and is the home of six major river systems, thirty-five mountain peaks, and the famed Woodstock festival. Ride out to this area during the last two weeks in September through late October for some unforgettable fall colors.

Best motorcycle route: Catskills Reservoirs
(Shown highlighted in pink)
Stevens Pass/Wenatchee Valley, Washington
If you’re really feeling the mood and want to take the scenic route, then take the entire Cascade Loop for one hell of a memorable ride. The Stevens Pass Greenway and National Scenic Byway crosses the Cascades and follows the Skykomish River. Some of the best fall views will be between Wenatchee and Leavenworth. Ride through the Wenatchee National Forest where the trees create some unforgettable colors.
Best motorcycle route: Stevens Pass, Wenatchee - Leavenworth
(Shown highlighted in pink)

Alongside New York’s Finger Lakes is the town of Skaneateles; a favorite for leaf-lovers. From late September through mid-October, take a ride around the Canandaigua Lake. Two favorite routes are Victor to Naples through South Bristol, or, beginning in Skaneateles, continue down E. Lake Road to the Ripley Hill Nature Preserve in Spafford.
Best motorcycle road: Victor - Finger Lakes through Bristol Valley
(Shown highlighted in pink)
The Berkshires, Massachusetts
Beginning in late September and running through mid-October, this area is an essential visit for those nearby who are looking for a little color. This is prime-time riding territory, too. These winding roads run through the mountains, connect small towns, and are really something you have to ride for yourself.
Best motorcycle route: Mohawk Trail from North Adams
(Shown highlighted in pink)