Why did you choose your Harley-Davidson Dyna Street Bob?
Growing up my parents and grandparents always made sure my brother and I had nice 4-wheelers, dirt bikes, and sports equipment, even if they didn’t always have the things they wanted. For years before he got one, I remember my dad would always point out nice Harley-Davidsons on the street. So for a really long time I thought that only Harleys were on the road, and Honda, Kawasaki, and other brands were off-road bikes. To this day, I still believe Harley-Davidson is the only on-road bike to have.

How did you get into riding motorcycles?
I started riding when I was little. I got my first 4-wheeler for Christmas when I was 3, but my dad had me on his for a while before that. As long as I can remember riding and motorcycles were the only thing I ever wanted to do. I grew up riding with my brother and my cousin, and we were always super competitive with each other. From motocross and drag racing quads and dirt bikes, to building tracks in grandma’s back field and racing there, mini tracks with toy dirt bikes in the sand box, we were always riding and doing something together that involved motorcycles. We would watch movies and shows, YouTube videos of freestyle, racing and fails together all the time. My grandma would record supercross on Saturday nights and we would watch it together at Sunday dinner. From those years of my childhood I always knew my life would be in motorsports.

How did you start doing wheelies and other stunts?
After graduating MMI, my interests were still with off-road/motocross and I tried to get on a race team as a mechanic. I realized pretty quick I didn’t want to do that, I’d rather be the racer. So I took the first job presented to me at the local Harley dealership as an entry-level tech and started back into motocross. A year later I bought my first Harley. A brand new, at the time leftover, 2013 Dyna. I still ride that same bike everyday. After that I quickly got wrapped up in the Harley stunt scene. It took me about a year and a half before I started to try and wheelie, but took way longer than that to get good at it. At first I really wasn’t that interested in being a stunt rider because, in my mind, I wasn’t that good and I was just having fun. 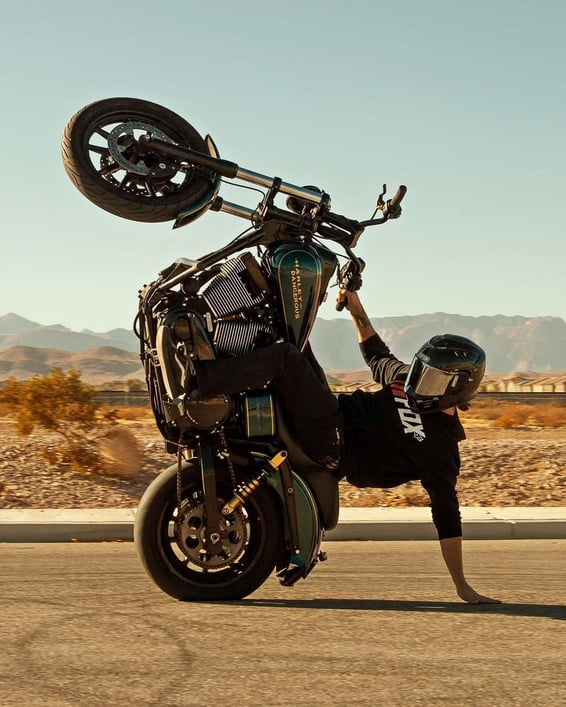 Why did you decide to make your Instagram?
It wasn’t until I met a few good friends in Florida that rode, and were decent at making me look better than I was, that I decided to get more serious with the Instagram thing. Ever since I've been riding and practicing, getting better at stunts, trying new things just because I wanted to. The only real reason for growing my Instagram is for the day I opened my own business/shop, which I did earlier this year. I still don’t post everything I do on my Harley on there because those memories are better told in person. I have a terrible love/hate relationship with social media though. I love staying up to date with new stuff and things that are happening in the motorcycle world, but I hate the addiction that can come right along with it. But Instagram has given me so many great opportunities that I wouldn’t have had without it.

What is the best life lesson you've learned from owning/riding a motorcycle?
My dad and my grandfather are both career truck drivers and that has made them cautious men. As stated, we were always doing something motorcycle related together. One of the many thing that has been drilled into my head from a young age by both my dad and pap is that, things happen fast. Everything can change in the blink of an eye and you always have to be paying attention to what other people are doing. As a motorcycle rider this is honestly the most important lesson anyone could learn. After a lifetime in the saddle, broken bones, scars, busted bikes, and hospital trips (for myself and friends), I can definitely say that things do happen fast. Part of that is never take for granted the things and people you have today. They could all be gone faster than you know it. 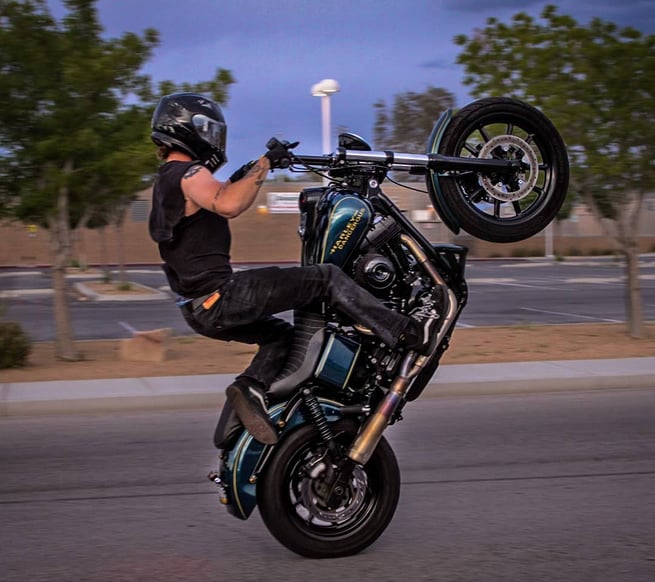 What is the most exciting adventure you’ve taken on a bike?
I don’t have one thing that I could say has been my greatest adventure, so far. I’ve been extremely fortunate in that my life has been an adventure from day one. I’ve ridden quads all across Pennsylvania, Florida and California and so many more. I’ve been to ATV rallies at Hatfield and McCoy trails, motorcycle rallies in Daytona, Gettysburg, Myrtle Beach, Arizona, and Las Vegas. My dyna has almost 100,000 miles on it in 7 years. I’ve ridden from Pennsylvania to Miami and back. Baton Rouge to Panama City Beach for spring break with my dad and brother. Vegas to Colorado for the Four Corners rally to watch my friends perform the stunt show. Vegas to Malibu and back in one day.

I can’t honestly say what has been the greatest adventure because the whole thing has been amazing for 28 years. I’ve lived life on my terms and done it my way for a long time and that’s what riding is all about. Most people can’t handle true freedom, but riding a motorcycle is pretty damn close. My favorite movie of all time is Point Break. If you switch surfing to riding, the message is the same. “Surfing(riding) is a source. It’ll change your life. Swear to god.”

What does being a part of the motorcycle community mean to you?
Being part of the motorcycle community, to me, is being no part of it at all. It’s about being my own person and doing the things I want to do. It’s not about fitting in or being anything other than myself. But that’s what the motorcycle community is all about, finding your personal freedom. Whatever it may be. Being a Harley tech I meet a lot of people and I enjoy sharing stories of rides, places you’ve seen, and bad decisions made along the way. The open road is where the greatest memories can be made. Most people will never experience the freedom of it and that’s what makes it so amazing.