We have our winning Dads: Take a look at their winning photos!

While Father’s Day may have gone and passed in all its glory, for some lucky Father riders, the fun didn’t end when the day did. The RumbleOn Father’s Day photo contest proved that tons of Dads out there are starting their kids off right by showing them all the adventure and freedom that goes with riding.

I’m entirely in support of that and based on the votes that came in, it seems like something that gets a big round of applause and approval from fellow riders.

The RumbleOn community was voting on some awesome picture submissions of fellow riders with their kids and their ride. And while it would have been great for every Dad to walk away as a winner, there are some photos that the RumbleOn community just couldn’t get enough of.

Every Dad out there is a winner in my book, but there were three photos that really stood out to the RumbleOn community. And while it’s said a picture is worth a thousand words, frankly, that wasn’t enough for us. We dug deeper to see the motivation and drive behind these three Dads.

James King, our 3rd place winner, has been riding for almost 30 years. And while his step-son Lucas is still young and in the process of catching the bug, James knows and loves riding. What’s his favorite thing? 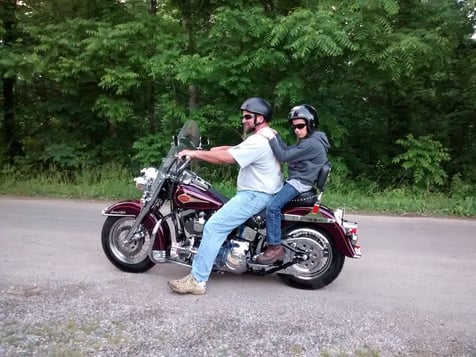 “The freedom, riding helps me escape and leave my worries behind,” said King. “It has taught me patience and the knowledge to know that life can change in the blink of an eye.” It’s a good mindset to have, especially when it comes to staying safe on the road. “There are two types of riders. The ones that have laid down a bike, and the ones that will lay down a bike.”

Terry Neal, our 2nd place winner who’s been riding for nine years, decided to take up riding on his 50th birthday. “I decided to take the motorcycle riding course offered by the state of Ohio, and it helped me gain the confidence to purchase my first bike, a 650 Yamaha V Star,” said Neal. “After two years, I was able to purchase my dream bike, a Victory Vision.” 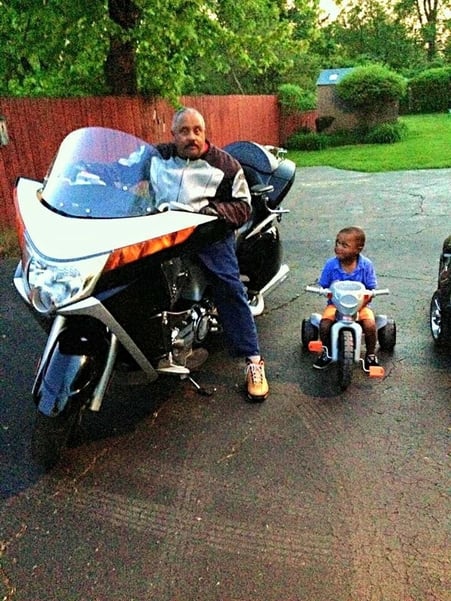 While Neal might have started riding later into his daughters’ lives, it still had an impact on their interest in riding.

“After getting my first bike, my oldest daughter told me she wanted to learn to ride,” said Neal. “She took the course and sent me a video of her riding the parking lot. I’m sure she’ll be riding whenever she can.” The real question was how had becoming a rider impacted his parenting technique?

“By the time I started riding, both of my daughters were grown,” said Neal. “But I’m more calm and relaxed when dealing with my grand kids.”

Buddy Cooper, our 1st prize winner, has very distinct memories of when motorcycles became a part of his life. 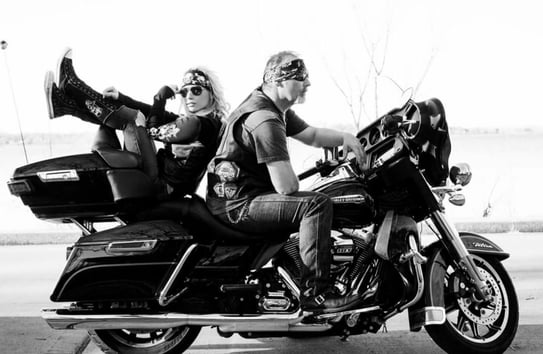 “I remember riding with my Dad from time to time when I was around 4 or 5,” said Buddy Cooper. “Of course, there were icons like Evil Kenevil and the Fonz from Happy Days that I wanted to be cool like.” Cooper rides with his daughter, who has had the privilege of growing up around motorcycles, just like him. He feels it has given him a unique opportunity to experience one on one time with her. When Cooper was asked what he thinks she’s gained from it, it’s all about the safety.

“My daughter has gained insight into what it’s like to be free on a motorcycle, as well as the possible dangers,” said Cooper. “I believe it has helped her and her friends to drive more carefully and watch for motorcycles out there. She gets to see that bikers aren’t all that Hollywood paint them to be, and she goes on toy runs and benefits rides to be part of making a difference.” 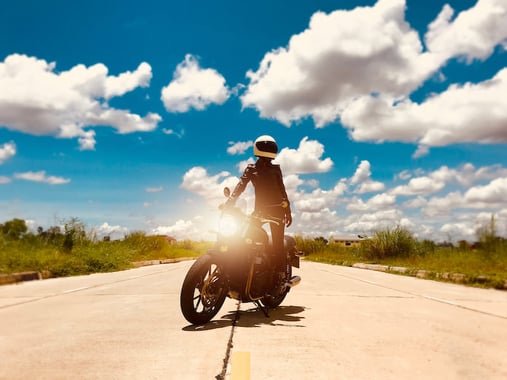 While these three Dads may come from different walks of life, with different riding experience under their belt, there’s likely one component that they would all agree with:the ability to ride has also let them  experience what true freedom is like. It’s made them happy and passionate about something. And when you’re happy, that happiness translates to your kids, too.

These weren’t just some awesome pictures; these are some awesome Dads. All the riding Dads out there should be recognized, and we’ll toast a cold one for all of you out there that are teaching your children all about riding, and what it means to ride. You’re all awesome. A big congratulations to our photo contest winners, Buddy, James, and Terry. Here’s to the ride!