First of the Women Bikers: The Hilarious Story of Sally Robinson

The Story of the First Biker Lady to Earn a License in D.C.

It’s safe to say that we biker women have a rebellious streak in us. In 1937, however, women weren’t allowed to ride motorcycles everywhere legally.
That’s when a courageous biker lady, independent and unafraid to back down, stood up for her rights and laid the foundation for us to ride free. She was tiny, weighed only 88 lbs and stood 4 feet 11 inches tall, but had a voice that was much, much larger.
Here is the awesome story of Sally Halterman, or Sally Robinson as referred to in the archives. The headstrong pioneer for biker women and soon-to-be lady bikers. She was the first who called bullshit on a rule that prohibited the union of women and motorcycles due to the fact that they couldn't get motorcycle license in D.C. She literally put her foot down and became the first woman to earn a motorcycle license  in D.C. and be inducted into the D.C. Motorcycle Club.

Sell Your Motorcycle the Easy Way, With No Listings and No Haggle!

Get a cash offer for your bike, and after you get paid, we'll come pick up your motorcycle for free!

"Sally Robinson - She Weighs Only 88 Pounds - Had to 'Buffalo' Stalwart Policeman but Finally Won His Praise - and License. 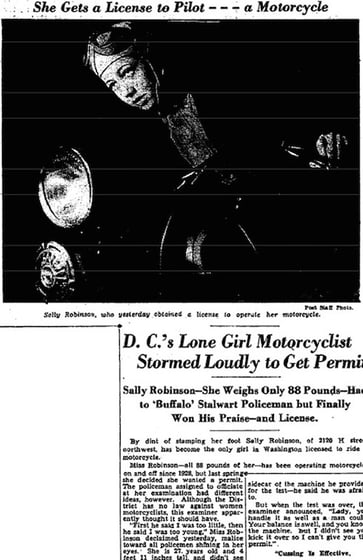 By dint of stamping her foot Sally Robinson, of 2120 H Street Northwest, has become the only girl in Washington licensed to ride a motorcycle.

Miss Robinson—all 88 pounds of her—has been operating motorcycles on and off since 1928, but last spring she decided she wanted a permit. The policeman assigned to officiate at her examination had different ideas, however. Although the District has no law against women motorcyclists, this examiner apparently thought it should have.

"First he said I was too little, then he said I was too young," Miss Robinson declaimed yesterday, malice toward all policeman shining in her eyes." She is 27, years old and 4 feet 11 inches tall, and didn't see what either factor had to do with her sitting behind the handlebars of a motorcycle.
"I passed the written examination all right—passed it twice, in fact. The first time I got 80 on it, but that wasn't good enough for him so I went down again and got 92, when that didn't satisfy him, I got my lawyer. 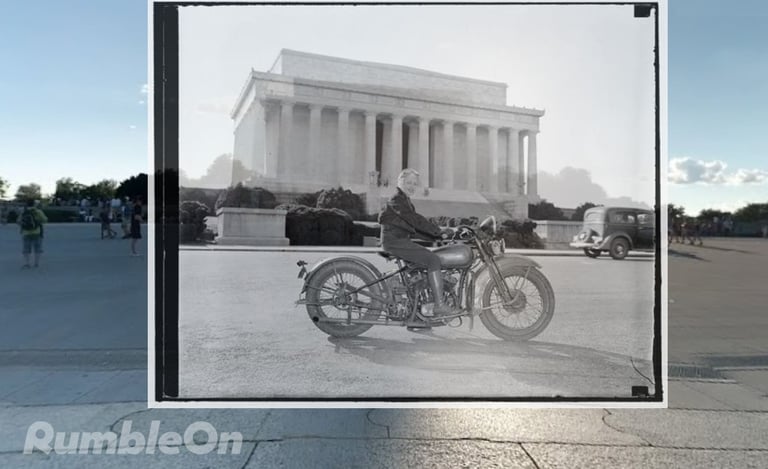 A then-and-now photo showing where Sally Robin posed with her motorcycle in front of the Lincoln Memorial, 1937.
"Well, that cop looked from me to the lawyer, and from the lawyer to me, and then he said I could take my road test," she continued. Her difficulties had not ended, however. Thinking all was well, she said goodbye to her lawyer and started out for the road test.

Then the policeman announced he would not ride with her in the sidecar of the machine he provided for the test —he said he was afraid to. 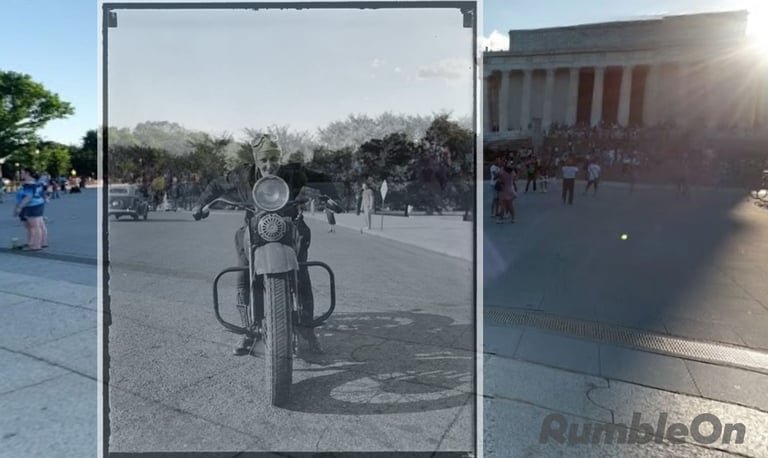 A then-and-now photo showing where Sally Robin posed with her motorcycle in front of the Lincoln Memorial, 1937.
But when the test was over, the examiner announced, "Lady, you handle it as well as a man could. Your balance is swell and you know the machine. But I didn't see you kick it over so I can't give you the permit."
That was when Miss Robinson started "cussing him out."
"I called him such names - well, I was ashamed of myself. But it worked, and I have the permit."

Miss Robinson uses the smallest type of machine built, but at that it weighs 325 pounds, nearly four times as much as she does. Despite the fact, it occasionally falls on her, she insists she would rather ride that machine than eat when she's hungry. As for automobiles, she has no use for them whatsoever.
At present her chief goal is membership in the Capitolians, a newly formed motorcycle club of which Lynn Cook, 1515 U Street Northwest is president. She will be on the only girl in the club, which does not share the Police Department's prejudice against the sex."
- (Transcribed from archived Washington Post article, September 11, 1937)
"Although she weights only 88 pounds--one-third of the machine she rides, Mrs. Sally Halterman is the first woman to be granted a license to operate a motorcycle in the District of Columbia. Immediately after receiving her permit, Mrs. Halterman was initiated into the D.C. Motorcycle Club - the only girl ever to be accorded this honor." 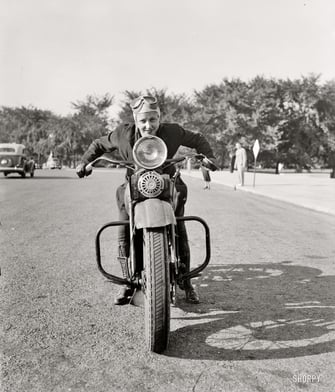 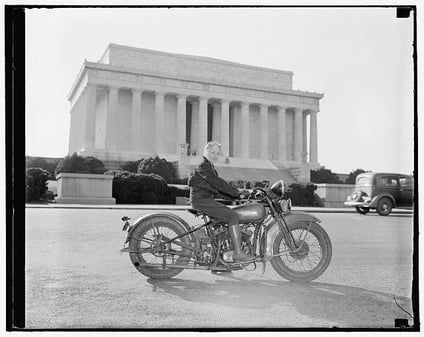 Enjoy motorcycle history? Read about the Mystery of the Rarest Motorcycle in the World, and the role that Harley-Davidson played in WWII.

Trade in a motorcycle the easy way, get your free cash offer.