Harley vs. Indian: Who Should Come Out On Top?

Oh, man. I don't know about you, but I love matches like these.

Harley and Indian seem to have been neck-in-neck since their inception. Indian, being the older company of the two, took early domination of the industry before quietly slipping away into the shadows while Harley began its supreme ruling. Indian has since made one of the best comebacks of all time, and now the two are back into the throes of competition.

While it would be awesome, I'm not actually having these two bikes duke it out to the death on the track. Instead, I want your opinion. In a matchup between the spunky Indian Scout Cruiser, the Sixty, and the burly Harley Davidson Cruiser 1200 Custom, who would reign supreme?

It's been a bit of a back and forth for me. I know the general population would immediately vote that the Harley-Davidson 1200 Custom would surely stomp the Indian Scout Sixty, but I'm not so sure. While the 1200 Custom definitely falls into the "buff" category, against the Scout Sixty, I'm inclined to think that bigger might not be so much better in this instance.

I'm a man divided, so I need you to help me make up my mind. Which of these cruisers deserves the win? Leave me a comment, I want to hear your thoughts! 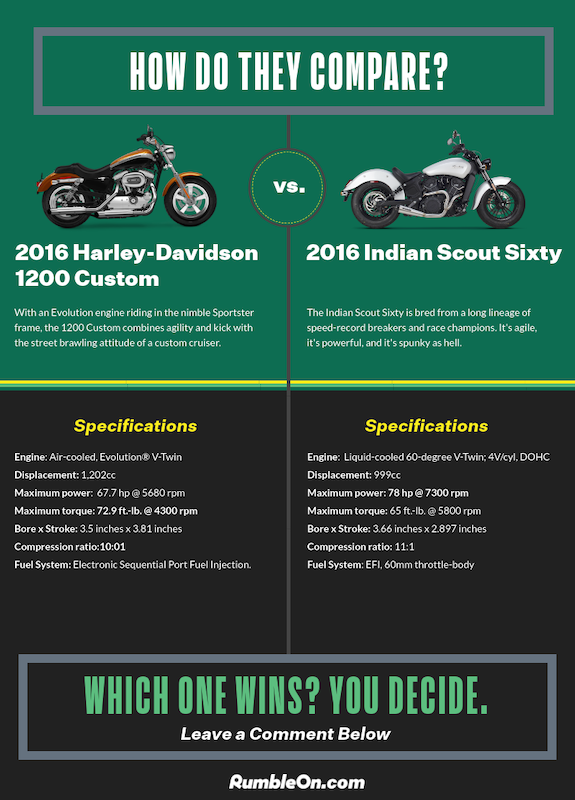