Harley Rose: The Dog Who Loves to Ride Motorcycles

Every once in awhile, if you’re lucky, a dog enters your life and changes everything.

Mike Dillon found her in a cardboard box; a wriggling Red Heeler Australian Cattle Dog pup among nine other brothers and sisters. “Cowboy pups,” deemed by the little girl beside them. Little did she know, they were doomed for the horse trough if they could not find homes. 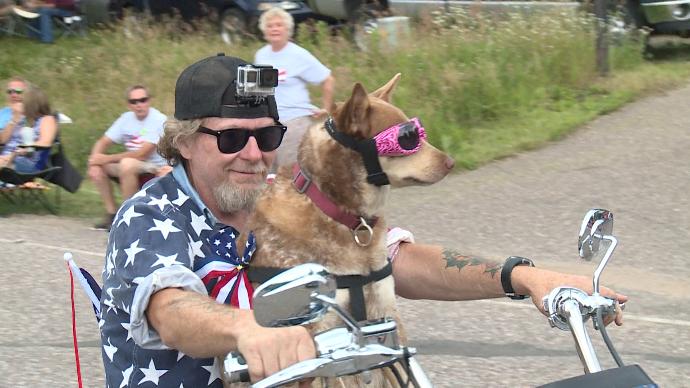 Get a FREE cash offer for your ride! Sell your motorcycle the easy way.

Here at RumbleOn, we're all about creating a worthwhile online experience that helps you sell your motorcycle for free. No gimmicks, no hassles, and no dealerships. Get started on your offer today!

Dillon’s daughter chose the little Heeler because of her speckled, light brown coat, and after enough change was scrounged up, they took the pup home. Soon, the newest family addition was named Rosarita by Dillon's son, Amos, who thought the pup's coat looked like Rosarita refried beans.

Little did they know that she would soon be the famed Harley Rose, a spectacular dog who rides motorcycles, who would soon be featured in parades, and adored by people everywhere.

The dog who loves hogs.

Dillon, 55, has been a lifelong motorcycle rider. When he was around seven years old, he started riding mini bikes and soon became a fan of the euphoric feeling and freedom that riding brings. It was when he rode with little Rosarita, nicknamed Rosie, tucked away in his hoodie pocket, that he realized her name should be Harley Rose, after the motorcycles she so loved to ride.

Not your typical dog. 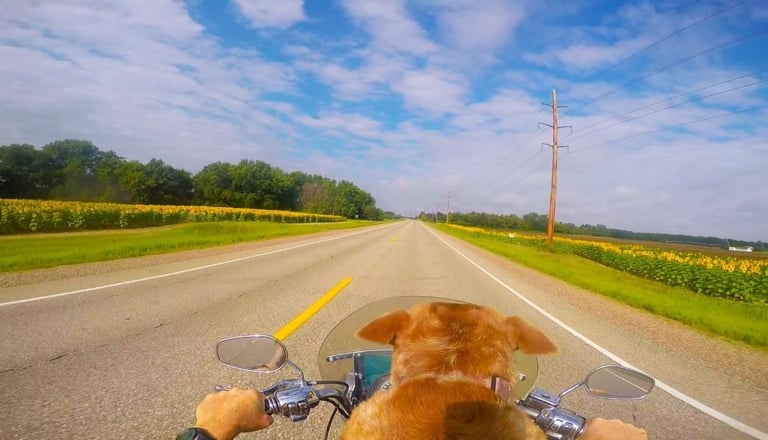 Harley Rose is somewhat of an anomaly, Dillon admits. Professional pet trainers have raised eyebrows at Harley Rose, telling Dillon that she should not be so fond of riding, as dogs do not like things moving underneath them; plus, most dogs are scared of loud noises, which motorcycle riders are all but accustomed to.

Harley Rose is not like most dogs, though. She loves to sit up front on a roaring ride with the wind in her face. Miss Rose even has her own pair of pink riding goggles that she wears in parades and on her motorcycle adventures around the country.

Where the ride takes her.

Recently, Dillon and Harley Rose took a ride together to Pike’s Peak in Colorado. Dillon told Harley that they were going to see snow. Harley Rose may have certain human attributes, but this news brought out her canine excitement. As soon as she saw the snow, she jumped off the bike and began eating big mouthfuls of the stuff and loving every minute of it.

That’s not the only time she reverts to her instincts. “We watch dingo life documentaries on TV all the time,” Dillon explains. She even seems to emulate a lot of the wild attributes similar to the dingos on television. “When she gives birth, she digs holes for a den in a matter of minutes,” said Dillon. “She’s a great mother.”

Don't try this at home.

One of Harley Rose’s pups, Reddgie, seemed to be following in his mother's motorcycle-lovin' tracks, as he too enjoyed riding. “Reddgie was a prestigious rider and loved it 110 percent,” Dillon said. However, it wasn’t to last. Once, while out on a ride, Reddgie saw they were nearing their home and lept off the moving motorcycle in his excitement. Though he was not injured, the damage was done. Reddgie hasn’t gone near a motorcycle since.

Dillon charmingly refers to dogs who ride on the fuel tank as “squat goblins,” but he is against just sticking any dog on a motorcycle and expecting them to be okay. The instance with Reddgie is a reminder that not all dogs are meant to ride motorcycles. “Just be careful,” he warns.

A greater purpose rides in the family.

Harley Rose is more than just a riding partner. She is a PTSD service dog and dutifully sticks close to Dillon’s side. Her protective and calm nature came to the rescue one day as they walked through a neighborhood in Gary, Indiana. Dillon recalled the dangerous situation.

“A random man in a crackhouse just opened his door and shouted “sicc ‘em!” to his pit bull, talking about us,” he said. The pit bull quickly approached, but Harley Rose calmly stood her ground and quietly stared it down. After a few moments, the pit bull "turned back into a puppy" before simply running back into his house. The situation deescalated, and Dillon and Harley were free to go about their happy walk.

Harley’s grandpup Arthur is also being trained as a service dog. Dillon hopes to teach him to serve as a service dog for his son who has autism, and Harley Rose and Arthur proudly attend community events such as autism awareness runs. Arthur, not surprisingly, also loves to ride motorcycles.

Get the best cash offer for your motorcycle from RumbleOn.

"I couldn't wait to sell my motorcycle once I found out how simple RumbleOn makes the process. They even took care of all the paperwork, so I barely had to lift a finger! Not mention, I did everything from the recliner in my living room, including scheduling a time for a Certified Transporter to come pick up my ride. I will never stress about how to sell my motorcycle after this experience, and neither will you when you sell a motorcycle to RumbleOn."