Motorcycle Maintenance: How to Winterize a Motorcycle the Right Way

How to Winterize a Motorcycle

Winter is coming. No, seriously. Any seasoned biker will tell you that rust is the sworn enemy of their motorcycle, and the winter season is just full of opportunities to wreak havoc on your bike. That's why it's important to be diligent about motorcycle maintenance during the winter months.

Get a free cash offer in just 15 minutes and sell a motorcycle the easy way!

It only takes 15 minutes to get a cash offer when you decide to sell your motorcycle to RumbleOn, and your ride stays in your garage until you get paid. Sell today!

No one wants to admit off-season is just around the corner, but it’s something we have to make peace with every year. It's better to get your motorcycle ready for winter storage than to worry about what to do when your motorcycle breaks down the next time you take it out. Here are some reminders on how to winterize a motorcycle and ensure that as soon as the first sign of spring rolls around, you will be rust-free and road-ready.

Leaving half a tank of untreated gasoline in your motorcycle during the off-season can cause damage. Full tanks will prevent rust from forming on the inside of the tank, and, even better, treated gas will prevent gunk and grime from building up in the engine while the bike is not being used.

Use a gas stabilizer chemical such as STA-BIL to keep the fuel fresh after storage. It also assists in removing water, preventing rust, and cleans the carburetors and fuel injectors.

After filling up the tank and adding the stabilizer, fire her up. Let the bike run for about five minutes to ensure the stabilizer mixes with the fuel and gets through all the gutty works of your fuel system.

You know who doesn't like the cold? Critters, especially mice. Cover the exhaust with a plastic bag and rubber band to prevent winter stowaways from making a nest in your bike during the off-season. Covering your exhaust can also prevent moisture from sneaking into the engine.

Remove the battery and connect it to something like a battery tender so it won’t die or drain while it isn't being used. One of the most important parts of how to maintain a motorcycle battery is storing it where it won’t drop below freezing. It’s also a good idea to clean the terminals and leads, and apply dielectric grease to prevent corrosion.

Inspect your tires for the proper pressure.

A soft or flat tire can develop a permanent flat spot if left weighted in one position for extended periods of time, especially when it's cold outside. To prevent this, store your bike on a center stand, or front and rear elevation paddock stands. If you don’t have a stand, just prop it up on some blocks.

Pay a visit every so often.

It's a good idea to start up your motorcycle every month or so during the off-season. If you're in a closed garage, open the door and let the engine run for five to ten minutes. Rev the engine a few times to flush out any old fuel that’s been sitting in the carburetors. Remember to make sure your bike cools down before re-applying the bike and muffler covers. 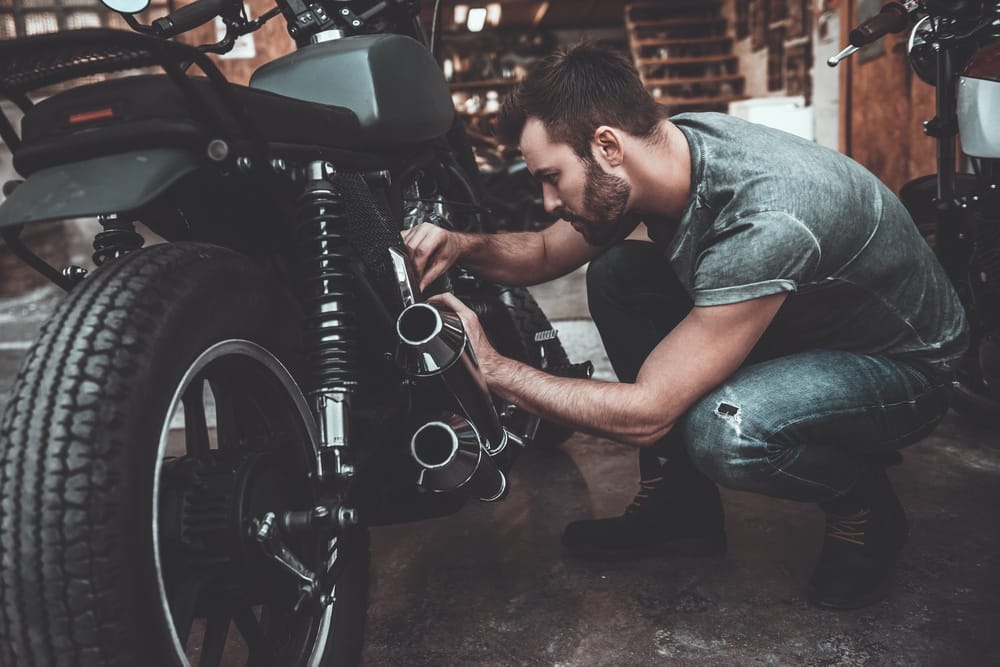 Change brake and clutch fluids as these can cause failure if moisture is allowed in. While you’re at it, go ahead and change the coolant (if applicable). Old fluid can sometimes cause deposits and buildup.

Re-lube any moving parts such as the fork surfaces, chain drive (if applicable), cables, and controls to prevent rust or binding. And while you’re at it, give your bike a good ol’ oil change.

Old oil traps contaminants that can damage things like rubber seals. Changing the oil can help preserve your engine. Cold temperatures are also the perfect catalysts to allow moisture to build up in your engine and cause rust to form on cylinder walls and pistons.

As you wash your motorcycle, treat it like a last hurrah before you board it for the winter. Spend some time with your bike: polish the chrome, wax the paint, whisper sweet nothings in its ear -- you know, the works. Just make sure it’s dry before you put the cover back on so condensation doesn't get trapped under the cover and undo all your hard work.

Cover it, and start the spring countdown.

Invest in a good motorcycle cover; it will be worth it. My suggestion is to use a breathable fabric cover. These help prevent any moisture or buildup of condensation much like a plastic tarp would.

Here is the part where you say your goodbyes. Parting is such sweet sorrow, but it’s just a matter of time before you can ride again. Plus, I know you’re already counting down until next season. It’ll be here before you know it!

"I got paid the same day I decided to sell my motorcycle to RumbleOn."

Come winter, deciding how to sell my motorcycle was my biggest obstacle, but once I found RumbleOn the process was so quick and painless. All I had to do was submit my bike's VIN number and wait 15 minutes for a cash offer to appear in my inbox. If you're trying to sell your motorcycle for free and without the hassle of going to the dealership, I'd recommend RumbleOn in a heartbeat.