Dominating the flat track since before many of us were born, the original Indian “Wrecking Crew” left an enduring mark on American and Indian Motorcycle history.

The history of Indian Motorcycles runs deep for anyone who’s ridden a straight-away at death-defying speeds, and members of the newest Indian “Wrecking Crew” can attest.

Among them is Jared Mees, who won Indian’s 15th AMA Grand National title racing an Indian Scout FTR750 in the 2017 American Flat Track Series. Mees, who started out racing Harleys, recognizes how far the brand has come since the original Wrecking Crew first blazed a trail over 60 years ago (RideApart).

Is there a better place to buy used motorcycles than from RumbleOn? We think not.

Do you think the original Indian Motorcycle “Wrecking Crew” members would go to any ole dealership to buy a used Indian motorcycle? Not likely.

Drowning in the aftermath of The Great Depression and a postwar economy, Americans needed a pastime that would raise their wounded spirits and bolster their rickety economy. As motorcycle sales in the U.S. continued to decrease in the 1930s, some brands were in desperate need of saving; Indian was one of them.

Eager to rectify the damages caused by war and a sunken economy, Indian Motorcycles enlisted the help of pro dirt track racers Ernie Beckman, Bobby Hill, and Bill Tuman. For several consecutive years, these flat track-racing legends dominated both dirt and road courses as Indian Motorcycle’s “Wrecking Crew," their streak ending only when the brand ceased operations in 1953. 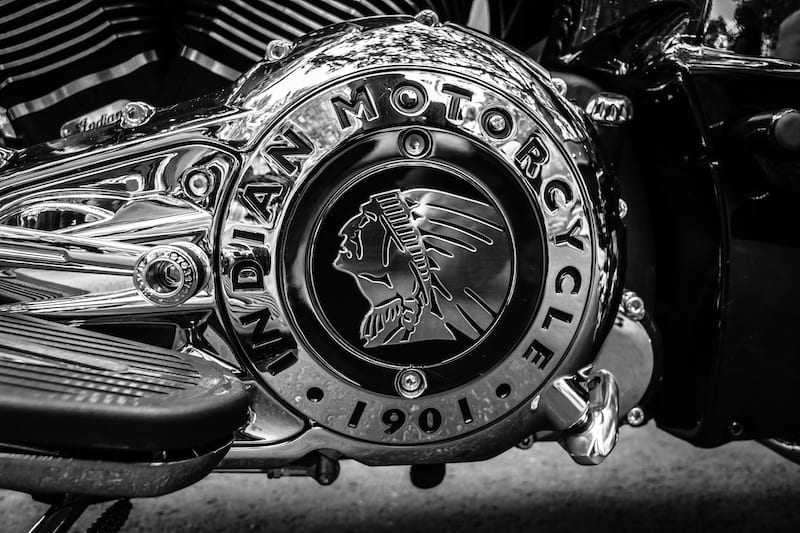 Shortly after, the Crew disbanded, and Beckman, Hill, and Tuman retired from the sport. More than 65 years later, their legacy lives on in Indian’s newest Wrecking Crew.

NOTE: If viewing on mobile, please tap the blue full-screen icon for the best experience.

The Story Behind the Original Indian Wrecking Crew Members

The year was 1946, and Michigander Ernie Beckman found himself in a bit of a pickle: he was about to compete in his first-ever motorcycle dirt track race after betting his friend he could outdo the other riders. "Well go ahead and get out there and let's see what you can do," his friend had said. (AMA Motorcycle Hall of Fame). 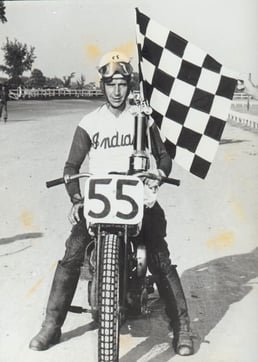 Turns out, even though Beckman didn’t set any records that day, he had a knack for racing and turned pro three years later.

As a racer, Beckman was known for his confidence and bold personality, proving himself to be a consistent performer on the national circuit during the 1950s. In fact, his prowess on the race track earned him three victories at the AMA Nationals, ten total podium finishes, and three consecutive wins at the eight-mile championship at Williams Grove (PA).

Most notable, though, is Beckman’s spot on Indian Motorcycle’s “Wrecking Crew.” Before the brand’s untimely demise, he became the last rider to win the AMA Grand National racing an Indian bike for more than 60 years.

Around the same time Beckman had his fateful start, a quiet and incredibly skilled machinist by the name of Bill Tuman was beginning his professional racing career. Born in Rockford, Illinois, Tuman began racing soon after getting a job building race bikes at a shop owned by Hap Jones, a top racer in the 1930s. 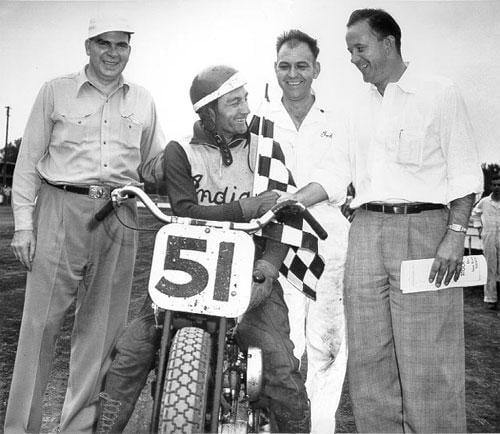 Known for his ability to master tracks quickly, Tuman shed his amateur status and turned pro in 1947. Soon after, he racked up several podium finishes and his first national win in Des Moines, Iowa, before being voted the AMA’s Most Popular Rider of the Year (a prestigious title within the racing community). Perhaps his most noteworthy accomplishment, however, occurred when he took first place at the infamous Springfield Mile in 1953. Interestingly enough, Tuman won this race using a borrowed Indian motorcycle engine after his own tuckered out.

Sporting a No. 51 Indian factory bike, Tuman won 136 consecutive first-place finishes and five AMA Grand Nationals during his professional career. For his contributions to the sport and to Indian Motorcycle’s legacy, Tuman’s name was etched into the serial number of the original factory bike (one of only 50 ever made) that he raced during his Wrecking Crew days.

A close friend of Tuman’s, Bobby Hill was the third and final member of the original Indian Wrecking Crew. A West Virginia native, Hill’s racing bug came as a result of his brother’s employment at a Harley-Davidson dealership. At just 16 years old, Hill purchased his first Harley, a WLD 45-cubic in., for just over $300, and after listening to several of his buddies fantasize about racing, Hill decided to take the leap. He joined the Wheeling, W. Va. Roamers motorcycle club and became a top novice and amateur rider in the early 1940s.

Shortly after, Hill’s racing career was put on hold following the outbreak of World War II. He enlisted in the U.S. Marines Corps and saw action in both China and the Philippines before coming home to pick up where he’d left off on the track. In a nail-biting race that made AMA history, Hill and his long-time hero Bill Huber tied for first place in a national competition in Atlanta, Georgia, in 1948. From there, he went on to win the Springfield mile in 1951 and 1952, earning him and the Wrecking Crew two consecutive AMA National Championship titles.

Dubbed a master of race strategy by fans and fellows alike, Hill won 12 total AMA Nationals before his retirement in 1959. Like Tuman, he received the AMA Most Popular Rider award, and was known for being pleasant, friendly, and according to Motorcyclist, “always on the hunt for the win.”

NOTE: If viewing on mobile, please tap the blue full-screen icon for the best experience.

In 1998, Hill, Tuman, and Beckman were all inducted into the AMA’s Motorcycle Hall of Fame. Years later, Beckman is survived by his fellow racing mates, Hill and Tuman, and the legacy created by all three men continues to inspire many.

Between 1951 and 1953, the OG Indian Wrecking Crew secured 14 total AMA Grand National wins, causing rivalries to form with other reputable brands that also had racing teams. Unfortunately, the Crew’s outstanding track record could not compete with Indian’s deflated customer base. Soon, the clan’s incredible efforts to restore the once unstoppable brand were thwarted, and production of brand-exclusive Indian bikes came to a halt.

More than four decades later, however, production of Indian motorcycles resumed following a merger of nine different companies, and a new Indian Wrecking Crew formed to help restore the legendary brand back to its former glory. Today, the Crew is composed of AMA pro dirt track racers Jared Mees, and brothers Briar and Bronson Bauman.

Since taking to the track in 2016, the new Crew has rekindled former rivalries with notable brands like Harley-Davidson, making us all the more excited to see what the future holds for Indian Motorcycle!

Want to make a statement? Buy a motorcycle online from RumbleOn

The Wrecking Crew might’ve known American flat track inside and out, but we know used motorcycles like the back of our hand. At RumbleOn, we know how tedious it can be to shop used motorcycles and other vehicles, especially when you throw low-ballers and dishonest third parties into the mix. Which is why we decided it was high time to find a solution. Take advantage of RumbleOn’s 100% online inventory of used motorcycles for sale (including any used Indian motorcycle for sale!) and bring the dealership to your device today.