The Riding Industry According to Joanne Donn

How Joanne Donn is helping the woman biker culture.

The motorcycle community is one full of inspirational, driven, and motivated people from all various walks of life. These are people that come from different upbringings, with different dreams and ambitions they strive to follow.

The difference between each individual rider can be monumental, and that’s part of the beauty of being a rider. Despite how different you are, and despite the qualities that separate you from everyone else, you’re a fellow rider and that is enough.

Joanne Donn, one of the biker women who is set to make waves in the industry, is no stranger to the adventure that comes with riding. As a current Showroom Gear Geek at RevZilla, Donn has her own blog, along with a Facebook page, entitled “GearChic”, and it acts as a much-needed knowledge base and resources for women’s biker clothing. She saw that there were various outlets for buying women’s motorcycle apparel, but very few resources that informed you about how to successfully shop for it, and what considerations should go into your purchase decisions.

How should you choose between biker boots for women? What is the best women’s motorcycle helmets? Does the type of material matter for women’s motorcycle jackets? That’s how GearChic was born, and just a simple look at Donn’s site shows that she’s passionate about giving access to valid information that matters regarding the best motorcycle gear for women. Because when it comes to your safety and the quality of your gear, there should be no greater priority.

As a female rider who’s lived in multiple different cities and areas, she’s been given the opportunity to understand the riding culture throughout different areas of the country. But when you get down to her story and expedition as a female rider, the riding initiative started for very practical reasons.

“For me, it was my husband,” said Donn, when asked about her motivation behind riding. “We started with a scooter because we lived in San Francisco, and it made sense to get a scooter in a city. That was in 2003, and it just kind of evolved. One year later, we bought a bike and I started riding. After that, we bought another one. The first bike was a 2003 Kawasaki Ninja 250, and he bought a 1997 Yamaha.” 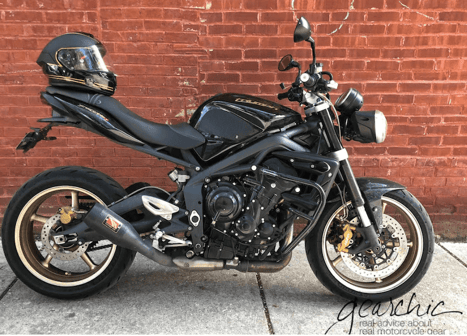 Well, to beat and weave in between San Francisco traffic, a sports bike seems like the practical choice to make. And from there, Donn was hooked on riding. She threw herself into the riding culture and even road with groups like The Motor Maids, which is the oldest Women’s Motorcycle Club in the United States. Now, she rides with her spouse, girlfriends who are also riders, and couples who are involved in the riding culture. But just as every rider has their niche comfort area, Donn prefers smaller numbers to ride with.

“It varies depending on my mood, but the majority is with smaller groups of people,” said Donn. “I like to ride with very small groups because it’s easier to manage the ability of safety and expectations. It’s easier because the decision making is just much quicker. You add more people, and it becomes complicated.” 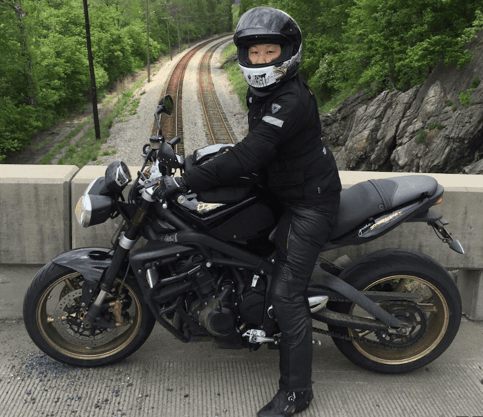 As is already obvious, Donn is all about riding safety, which was part of the motivation and ambition behind creating GearChic for women bikers. She saw a much needed sector for women's motorcycle apparel. There wasn't a go-to resource to access the best motorcycle gear for women, or best bikers boots for women, or even just women's motorcycle jacket. There was no point in riding if it wasn’t going to be safe,  and more than just looks should go into the choices of why you pick certain safety equipment over other options. The inspiration behind GearChic was to really help provide riders, especially biker women who don’t have many choices within the industry, with the knowledge they need to make the most informed decisions.

“I started in 2007, and my initial goal was to make a gear directory so that you could look up a jacket, and filter by size, fit, or features,” said Donn. But when you have a good and greatly valuable idea, it often fans out to become much more. “The need was a much more basic need, which was how to shop. People didn’t have any idea how to shop for products, or what to look for. Now I want to focus more on new riders and getting them educated, and help to motivate them to figure out what their path should be.” 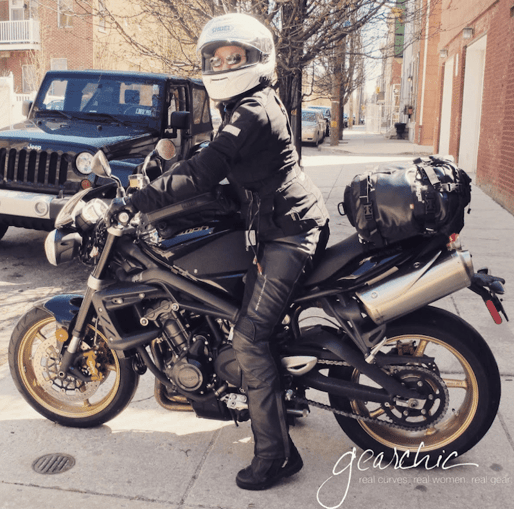 But being a new rider isn’t the only struggle when you come into the riding culture--sometimes being a female rider is just as difficult. In a culture that’s belonged predominantly to male riders for a long period of time, jumping into the industry, as a female, can sometimes be a bit challenging.

“It can be difficult to get into ‘the boys club,’ in terms of writing jobs and media. There are also very few outlets for the female point of view,” said Donn, in reference to the difficulty biker women often face. “I find it difficult to find resources. It’s male dominated, and when you’re only surrounded by male riders, assumptions can be made. But I’ve met a lot of supportive male riders, and I’ve just gotten very lucky.”

Riding is such an exciting adventure, especially when you’re new to the culture. It’s an exciting time of adjustment and adventure, and most riders look back at that time in their life fondly. Everyone remembers the time they first decided to straddle a bike, and how it’s changed their life. But most riders would also admit that they’ve met at least one other that wasn’t as welcoming as they could have been. And when you’re new to a culture, being embraced with open arms can be the difference between continuing to ride, and putting the kickstand down indefinitely. No matter your gender, race, sex, or bike of choice, if you are a rider, you’re one of us. 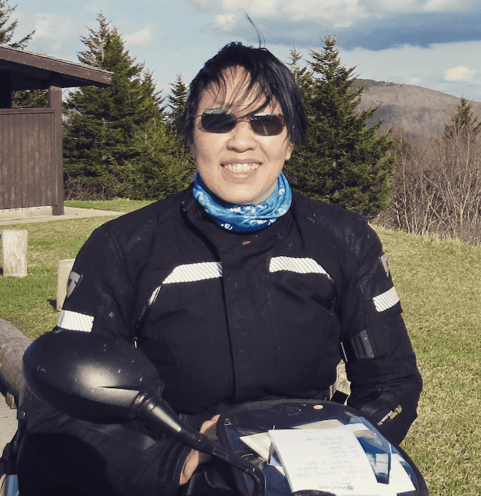 But, specifically, getting the younger generation interested in riding is not an easy feat, and as can be seen by many motorcycle companies struggling to get new riders in Gen Y, it’s a force to be reckoned with.

“I think it’s income, as a lot of [millennial's] aren’t finding jobs or working. The mainstream is dominated by Hollywood and politics; there are no motorcycles,” said Donn. “A lot of riding influences have died and gone away. I also think it’s because they’re raised to be careful. They’ve been forced to wear things, or not do things because they could get hurt. They’ve been raised differently where doing something dangerous isn’t encouraged. I think women are the biggest market right now because we have the money to buy, but the industry doesn’t recognize that and they look at millennial's.”

The change in times means that more women are working jobs that allow them the financial ability and freedom to make big purchases. This means that female riders are the perfect sector for brands to target, especially when they are compared to the millennial's that don’t have the means or funds to make that kind of purchase. Donn has gained more from riding than she ever could have imaged. It acted as a driving force to leave her home state and experience new areas, dramatically change her career, and grow into a completely new person. It’s given her new friends and experiences that might not have been as easy to achieve had she never taken up riding. She’s received invaluable advice through her years on two wheels, but she has her own two cents to contribute, too. 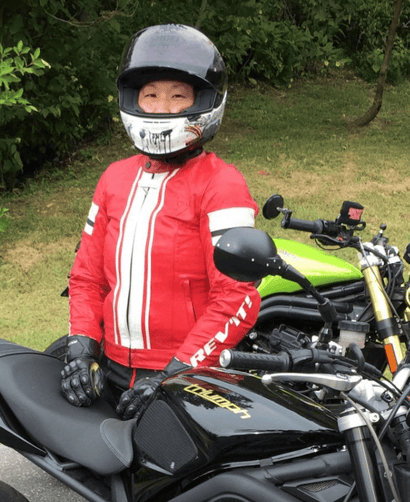 “Your bike choice can dictate your success and climb,” said Donn. “Riding is like climbing a mountain. How you get to the top and how easy you get there depends on how you start. You can’t roller-skate up a mountain, and your bike choice is the first one you make. If you don’t make the correct one, you’ll hit a wall. Don’t let your ego get in the way and be honest and truthful to yourself. Do everything for you.”

The motorcycle culture is like no other, and when riders like Donn try to cultivate areas and resources for other riders and biker women to utilize, it contributes a great balance to the industry. You’re never fully done learning, and that includes learning everything you can about riding. It’s always a learning experience, and with resources like GearChic, and riders like Donn who are motivated to make the industry more well-rounded, it’s something that we never want to stop learning from.

A majority of us would say that riding is our life and when more people throw themselves into the culture, it means more adventures and friends to make along the way. And what’s riding without adventures around the corner, and friends to make fond memories with? Well, it wouldn’t be a ride worth going on. You understand the freedom that comes with riding, and the sense of release it gives you from everyday life and everyday problems. You understand the adventure that comes with a rumbling engine, two wheels, and a long and seemingly infinite road. You understand that tight and unique bond and friendship that can be established between riders, and the lengths of sacrifice you’re willing to go to to ensure your fellow riding friends are happy. You are a rider, and that is enough.

If you'd like to see more of what GearChic is about, visit their site at GearChic.com!