A Look at the Kawasaki Vulcan Motorcycle

The Life and History of the Kawasaki Vulcan Motorcycle

The Vulcan motorcycle is part of the line of cruisers produced that first made their debut in 1985. These stylish, comfortable cruisers are quite the contrast to the sporty and recognizable Kawasaki Ninja motorcycles, but have been wildly popular nonetheless.

You can see the evidence of that with the history of Kawasaki. The cruisers feature several variants which range from 400 to 2,000 cc motors, most of which being V-twins.

The Kawasaki motorcycles hold steady in their heritage, though the evolution of their lines over the years has exhibited a keeping-with-the-times for which Kawasaki has been successful. Let’s take a look at the development of the Vulcan Motorcycle, and see how they’ve grown to be the bikes they are today. 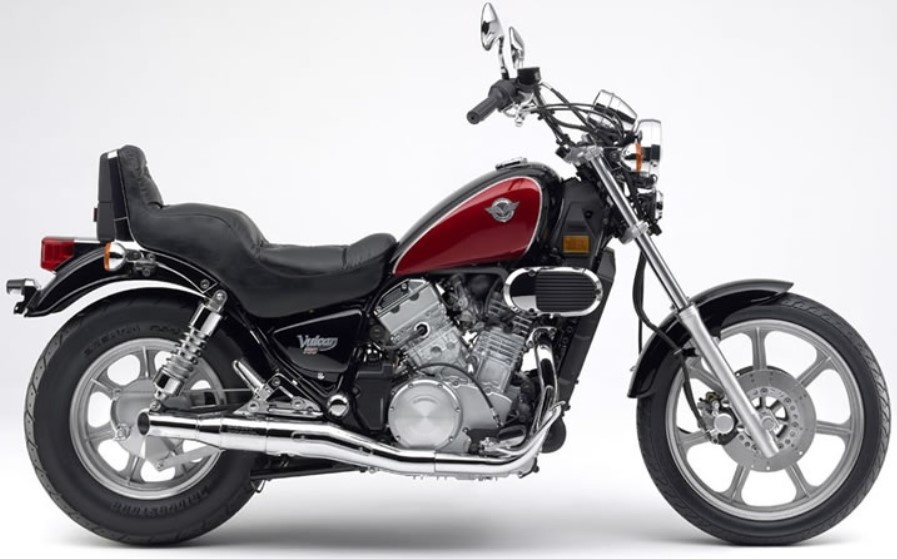 The Vulcan 750 debuted in 1984 as a 1985 model, and it was launched worldwide in the history of Kawasaki Motorcycles' first cruiser powered by a V-twin engine. The Vulcan 750 is known for its reliable shaft drive that was primarily found on large cruisers, which made it unique to its class. Initially, the first US model was limited to 699 ccs to avoid tariffs on engines larger than 700 ccs, but after the tax was lifted in 1986, the engine capacity was increased to 750 ccs. The liquid-cooled DOHC V-twin produced 66 hp and 47 ft-lbs of torque through most of its rpm range.

The Vulcan 750 remained mostly unchanged during its 22-year production, while only minor component adjustments and paint schemes were the only updates made to the classic-looking bike. 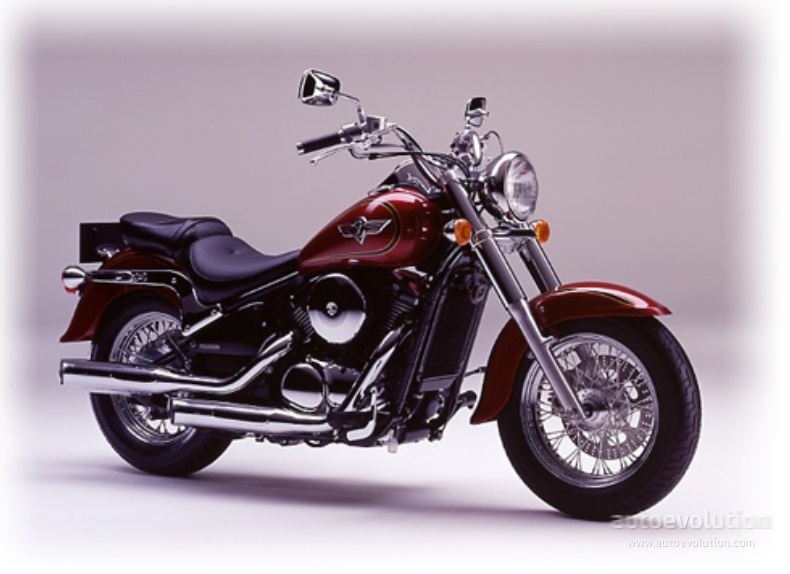 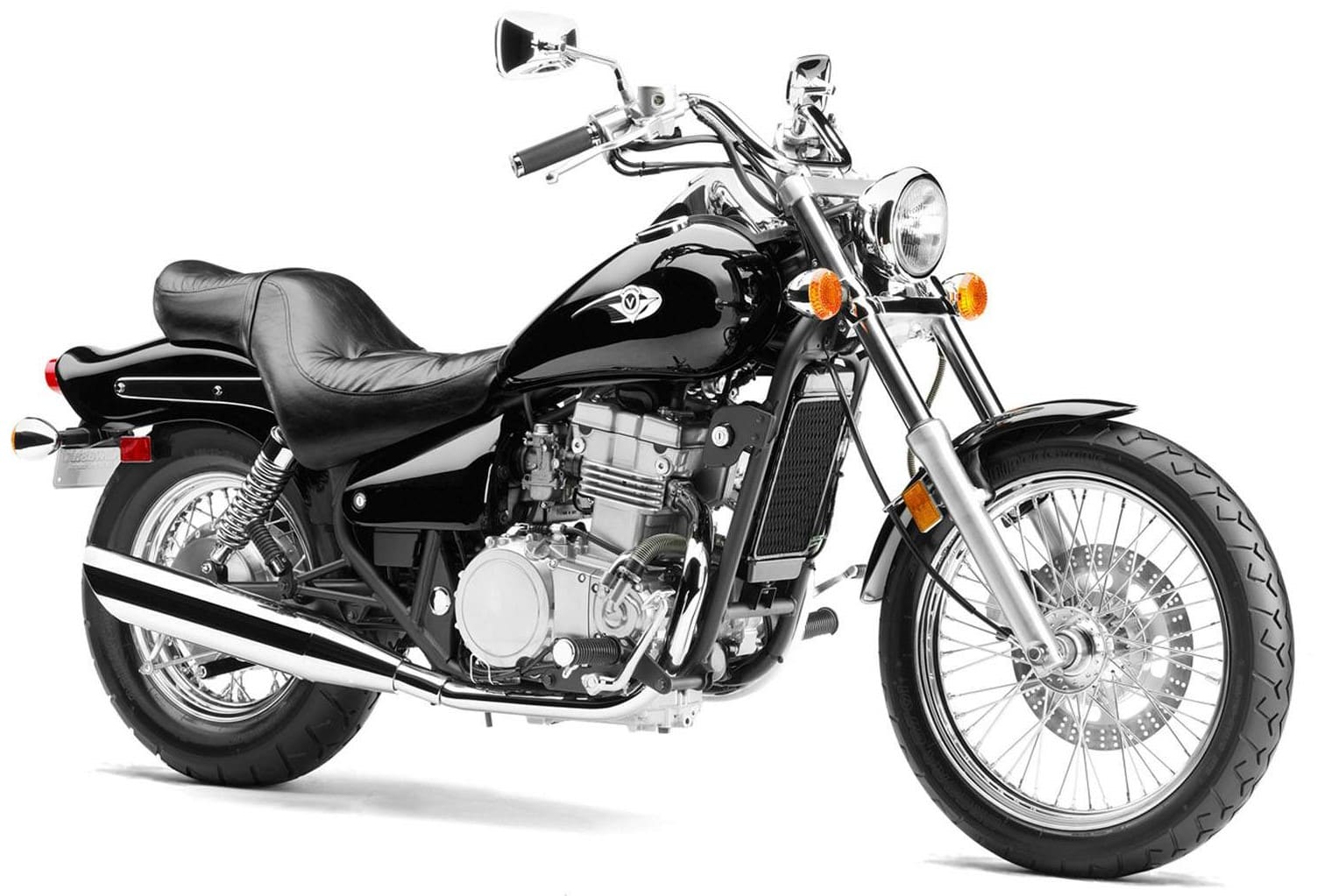 Also called the EN500A, the Vulcan 500 was the successor of the Kawasaki 454 LTD in 1990. The Vulcan 500 EN500A had a parallel twin 498 cc engine, six-speed transmission, and belt final drive. The engine of the EN500A that is very similar, some would say nearly identical, to the Kawasaki Ninja 500R. In 1996, the EN500A was replaced with the Vulcan 500 LTD, otherwise known as the EN500C. The 500 LTD was upgraded to have a final chain drive, better ergonomics, and new camshaft profiles and lower compression pistons that increased low-end torque.

Production of the Vulcan 500 LTD ran for nearly 20 years but was discontinued after the 2009 model. 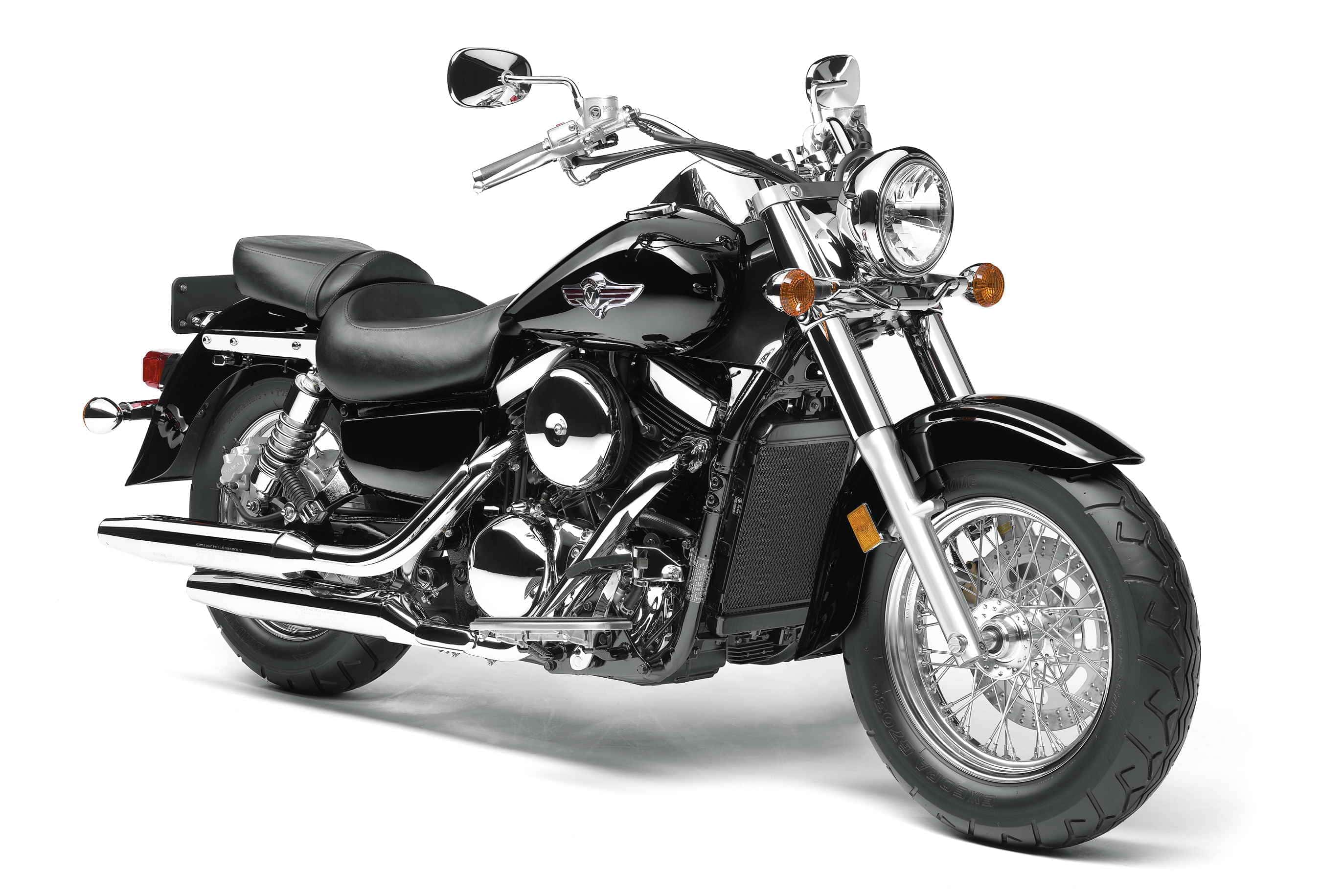 The Vulcan 1500 is a V-twin that has been known for its delivery of power and torque since it debuted in 1987. The 1500 Classic has a 1,470 cc liquid-cooled SOHC V-twin, and the production of this big-bore metric cruiser ran until 1999.

The Kawasaki 1500 Drifter was a retro-styled motorcycle that had all the modern technology offered when it debuted in 1999. The Drifter was powered by a fuel-injected liquid-cooled 1470 cc V-twin. The bike had a five-speed transmission plus an automatic neutral finder, and later models featured chromed accessories and seat upgrades.

Fun fact: The Kawasaki Vulcan Super Chief was created in 1999 as the brainchild of Ken Boyko, Don Emde, son of Indian legend Floyd Emde and John Hoover of Kawasaki. The Drifter featured a Kawasaki engine but was designed with the classic 1940’s style lines of the Indian Chief. The Super Chief was shipped to Japan where it inspired the creation and launch of the Vulcan 1500 Drifter in 1999.

Here's a copy of the original sketch drawn by Don Emde when brainstorming the Super Chief in 1996: 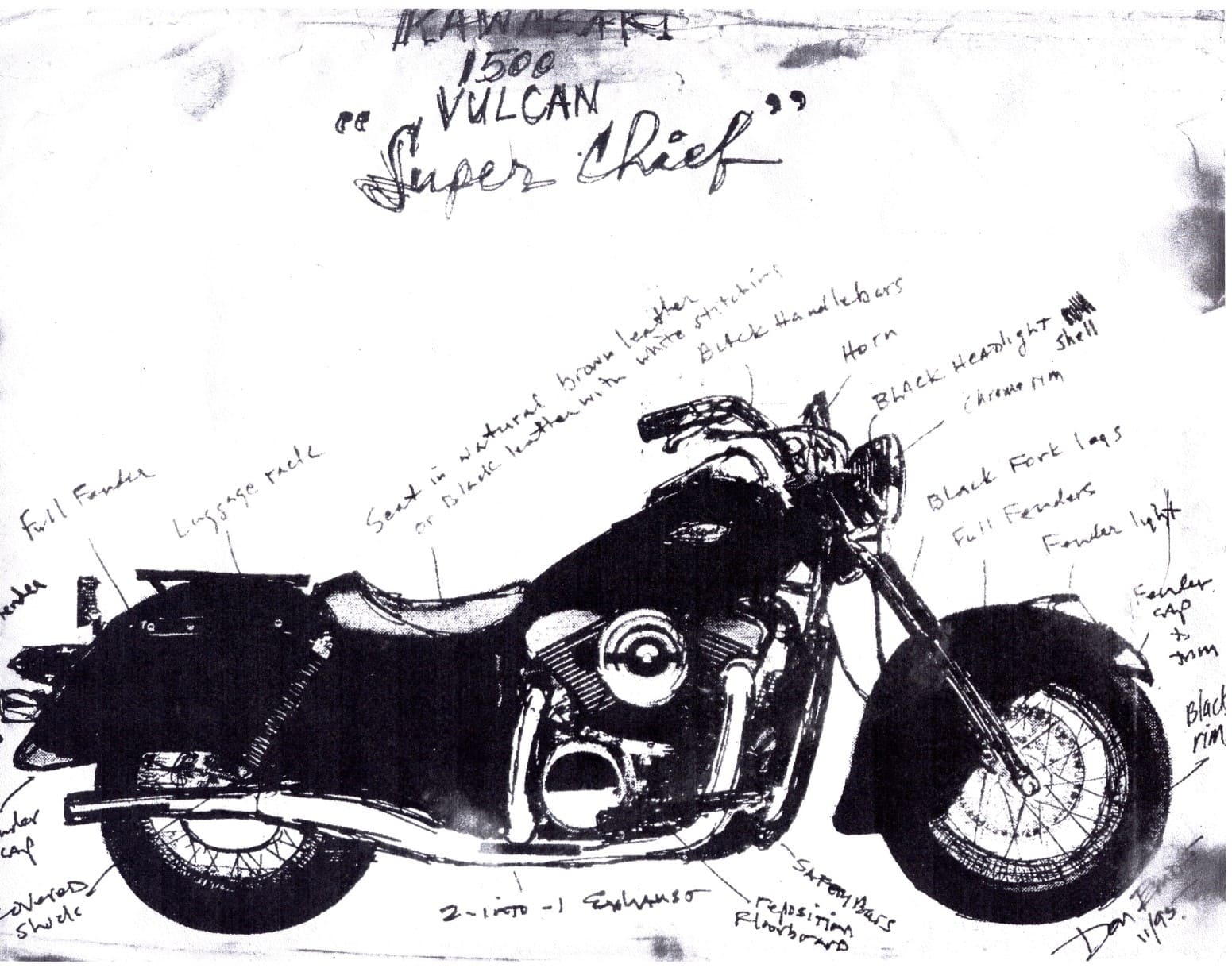 The 1500 Mean Streak was the performance version of the Vulcan 1500 and, although it contained the same basic engine, had larger valves, new camshafts, larger fuel injection throttle bodies, a redesigned combustion chamber and high compression pistons. This increased the horsepower to 72 at 5500 rpm and 90ft.lb at 3000 rpm. The 1500 Mean Streak was produced from 2002 - 2004 before it was taken over by the 1600 Mean Streak. 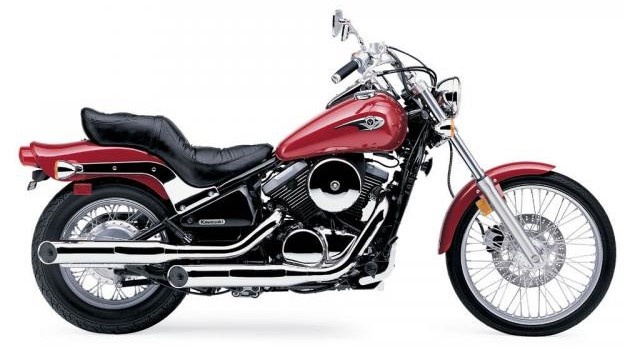 The first Vulcan 800, also known as the VN800A, was introduced in 1995 and featured a Softail design with a bobbed rear fender and large front wheel.  It had an 805 cc liquid-cooled four valves per cylinder V-twin with a five-speed transmission with optional slap shift.

The later, retro-styled VN800B debuted a year later in 1996 and featured full fenders and 16” front and rear wheels. Both of these Vulcan 800 models were discontinued in 2006 after the VN900 was introduced. 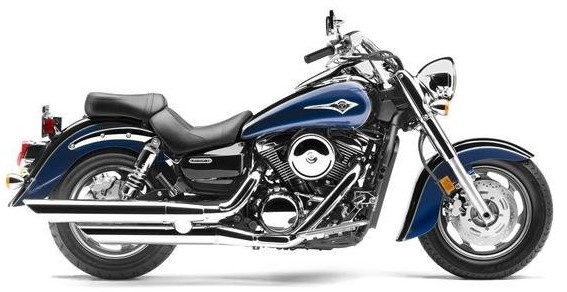 The Vulcan 1600 series included three variations: the Nomad, the Mean Streak, and the Classic. All had a 1,552 cc SOHC liquid-cooled four valves per cylinder V-twin engine and five-speed transmission. The 1600 series was replaced in 2009 when Kawasaki upgraded once again to the 1700 series. 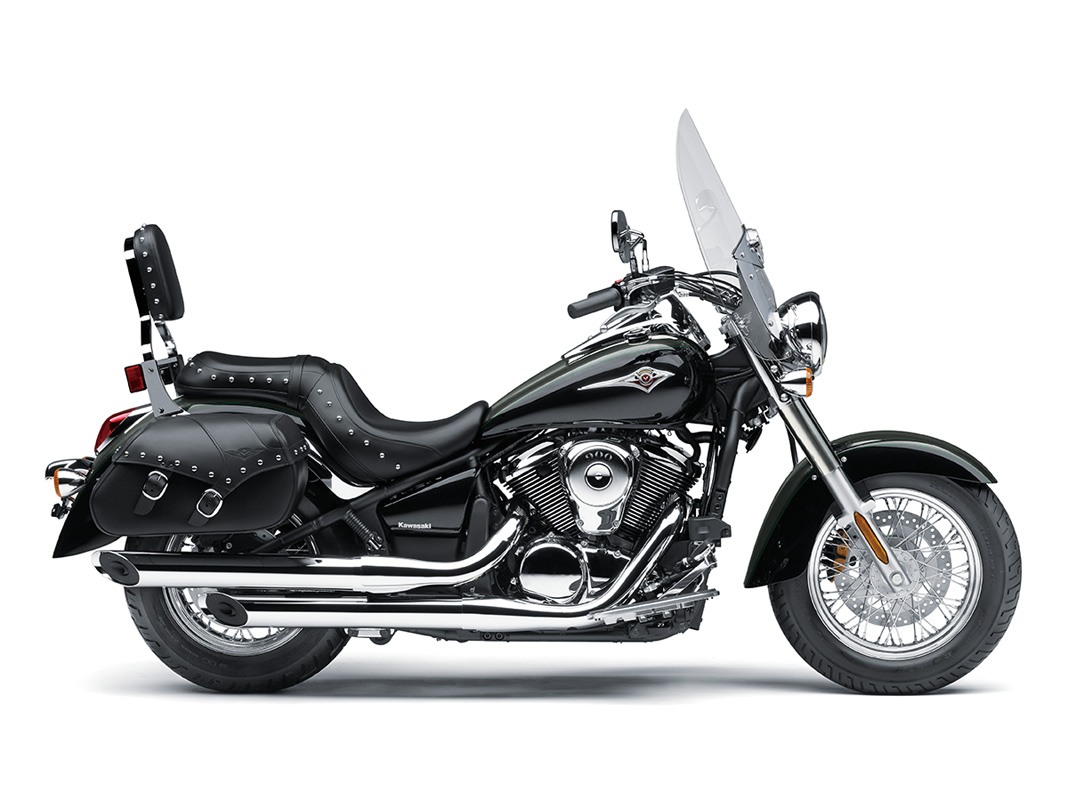 The Vulcan 900 series consists of the 900 Classic, Vulcan 900 Classic LT, and the Vulcan 900 Custom. These three all featured a 903 cc liquid-cooled V-twin SOHC engine with belt drive, a four-valve cylinder head, and tank-mounted speedometer with turn signal indicators and caution lamps. The Vulcan 900 Classic LT featured the same details as the Classic, plus the addition of the passenger backrest, studded accents, and saddlebags. While the Custom featured a 180mm rear tire, a thin 21 inch, cast front wheel, a more low-profile seat with a smaller pillion, and drag-style handlebars.

For the 900 Classic LT, the h 903cc V-twin can produce 50 hp and 78 Nm of torque.The engine of the Classic LT was tweaked by Kawasaki to improve the ability to carry long distances fast with a lot of luggage, as well as power delivery at low revs. The Classic LT also deliberately delivers for modern needs such as urban commuting for younger riders such as Millennials.

The series’ upgrades have been minimal to maintain the popular aspects of the original 900, and the model continues production to this day.

The VN900 Classic made in 2012 tuned down the engine of the 2006 model to refine the comfort while maintaining the visuals of the popular bobber-style. The retro fender accentuates chrome parts, while the engine can deliver the same horsepower and torque for dependable acceleration at any speed. The Special Edition of the Classic (2012 - 2013) provides all the amenities of the Classic while providing more in the sense of eye-candy custom graphics with black and chrome parts.

The Kawasaki VN900 Custom is designed to look like a stock bike but offered such upgrades as aesthetic details, accessories, and customization. The 900 Vulcan Classic LT maintained the low price when compared to other big tourers, but came standard with touring amenities such as saddlebags, a backrest, and an adjustable windshield.

On the same hand, the Kawasaki VN900 Light Tourer (2011 - 2012) boasts a custom look while the performance maintains the touring needs and lifestyle such as a larger gas tank and 50 hp, 5-speed gearbox with final belt drive.

The Kawasaki Vulcan 1700 was released in 2009 to replace the recently discontinued Vulcan 1600. The 1700 boasted a larger displacement engine, a six-speed transmission, and a ride-by-wire throttle. For the time being, the 1700 comes in the Voyager and the Vaquero. Who knows what’s to come?

The Vulcan 1700 line (except for the Voyagers and Vaqueros) featured a 1,700 cc 52-degree SOHC liquid-cooled fuel-injected V-twin engine with a six-speed transmission. The tour motorcycles also came with a ride-by-wire throttle, hard saddlebags, and a windshield. 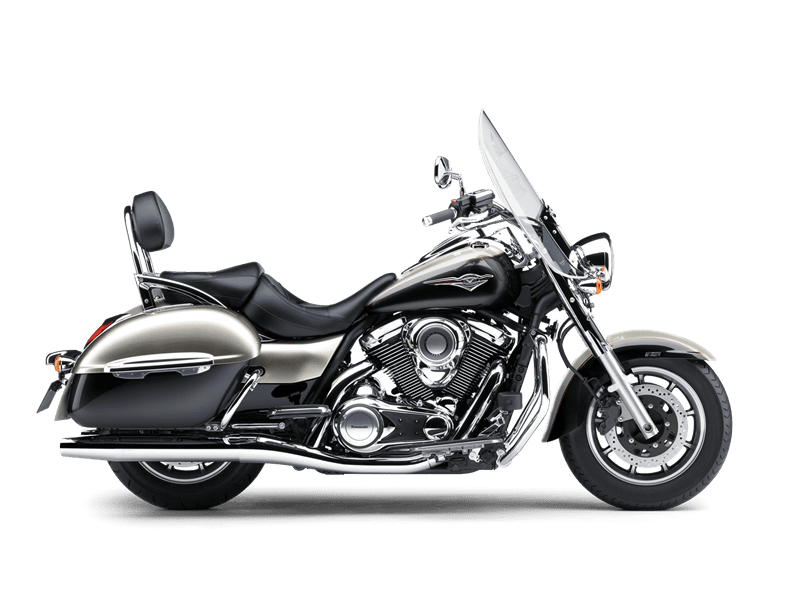 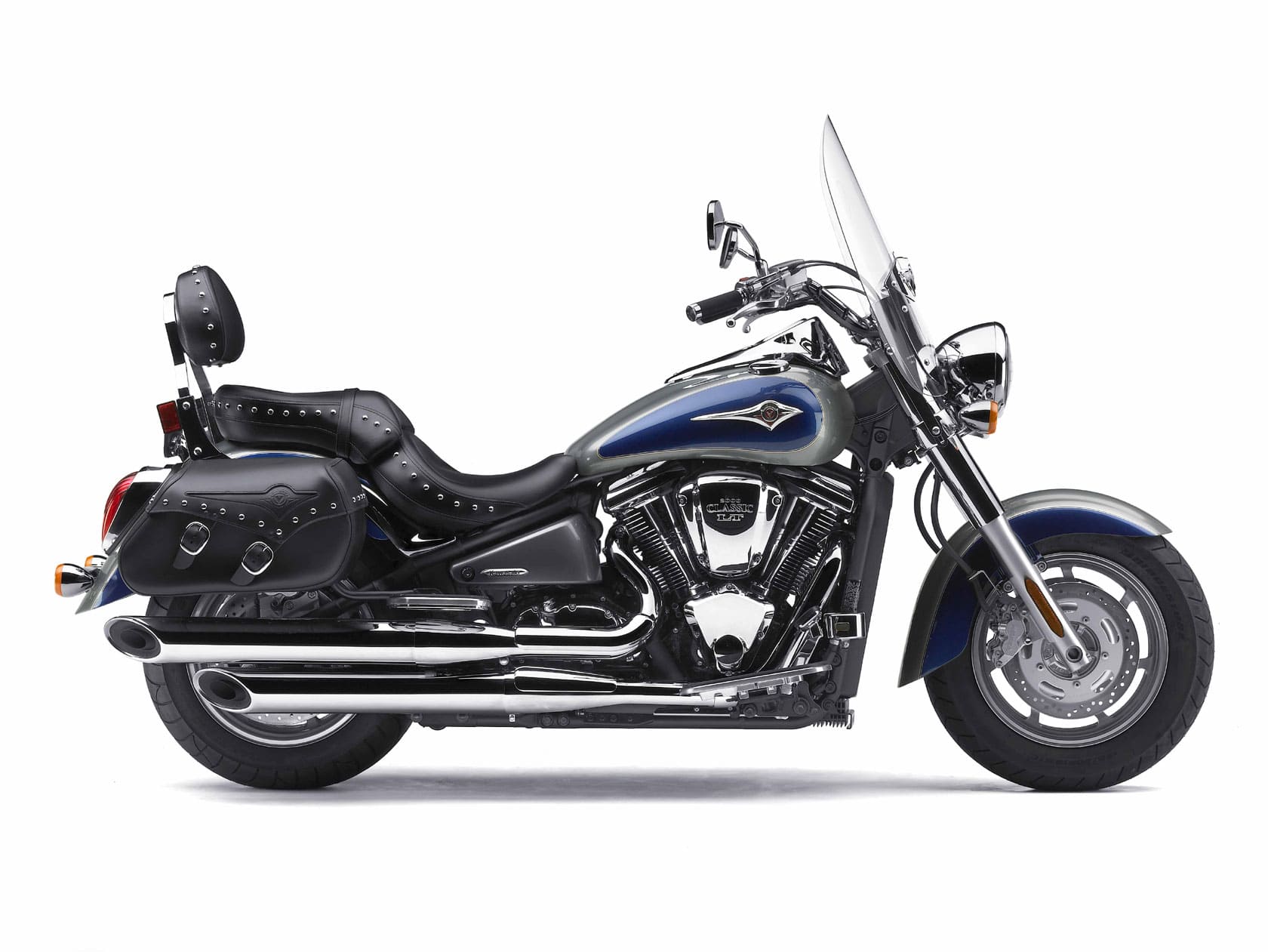 When the Vulcan 2000 got its start in 2006, l three series models are currently produced. Available in three models: the standard, Classic, and Classic LT models, the Vulcan 2000s are considered a perfect blend of power and style. The 2000 is the largest displacement engine in Kawasaki’s history, and all three models have a liquid-cooled, 2053 cc V-twin engine that produces a whopping 141 lb/ft of torque at 2,800 rpm of rumbling muscle. 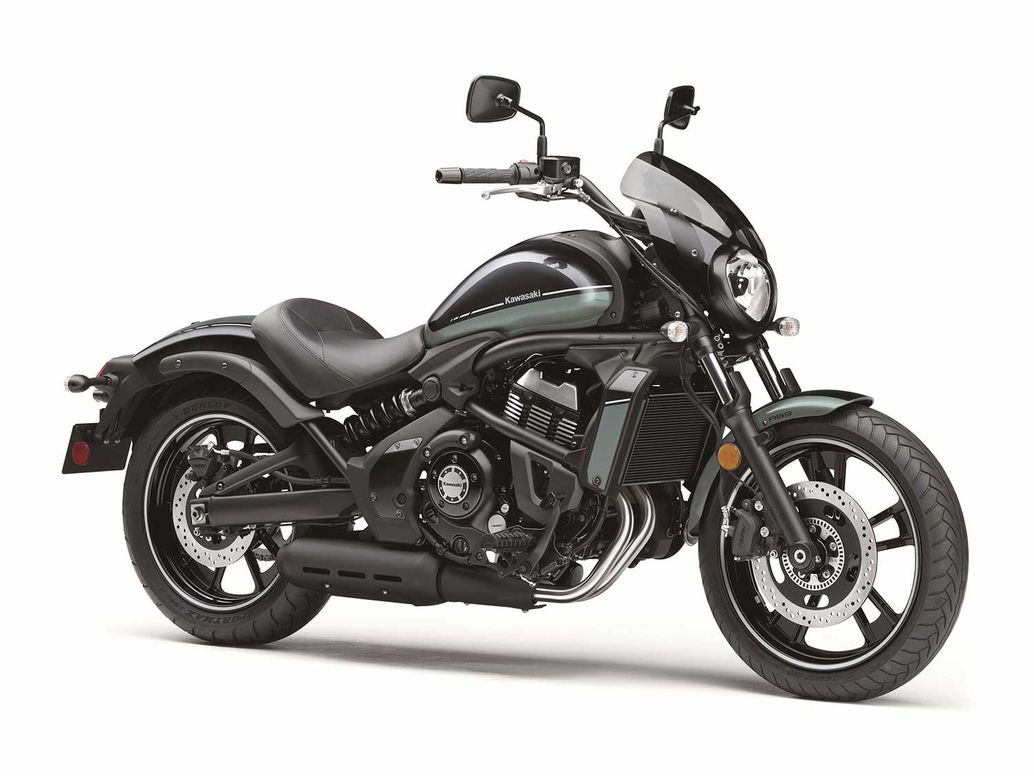 The Vulcan S cruiser is available in three models: Vulcan S, Vulcan S ABS, or the  Vulcan S ABS Café. All three share a Ninja-derived power with a liquid-cooled 650cc twin engine. The Vulcan S has a low total-weight and is comfortable and agile. It's ergo-fit design allows for the comfort of all riders with many adjustments available to the footpegs, handlebars, and seat.

What are your thoughts on this Kawasaki family? What's your favorite in the line?  Let me know in a comment, and rumble on!