Decades later, he’s still making his mark on the track.

Growing up in rural Modesto, California, in the early 1960s, 12-year-old Kenny Roberts was into horseback riding. After mounting a minibike following a friendly dare, that all changed. Soon, the youngster was dismantling his father’s lawnmower, needing its engine to create his very own motorcycle. From then on, his fate was sealed. 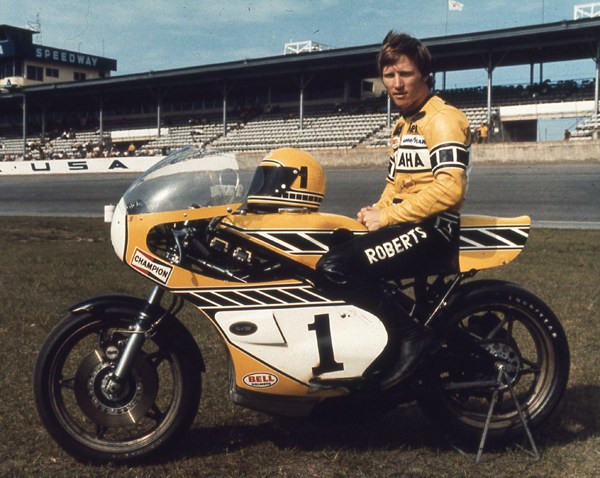 Roberts began competing in local dirt track races when he was just a teenager. He made a deep impression on an observing Suzuki dealer who, after realizing the 17-year-old had a natural talent for racing, offered Roberts a sponsorship. The day after his eighteenth birthday, Roberts competed in his first professional dirt track race aboard a Suzuki motorcycle, finishing fourth and paving the way for what would become one of the most successful racing careers in AMA motorcycle racing history.

In 1970, Roberts became a factory-sponsored rider for Yamaha’s American team, and earned himself the AMA Rookie of the Year Award soon after. Lacking horsepower but not determination, Roberts and his Yamaha motorcycles (first the XS 650, later the TZ750) consistently outperformed the dominant Harley-Davidson factory dirt track team, while also keeping pace with legends like Giacomo Agostini in the 200-mile road races at Daytona and Imola in 1974.

From then on, “King Kenny” went on to become a world class road racer, often competing against (and surpassing) famous European riders like Barry Sheene, who had originally doubted Roberts’s ability to perform well on asphalt given his dirt track pedigree; in fact, it was this very pedigree that made Roberts such a force to be reckoned with. A dirt track racer at heart, Roberts perfected a daring racing technique that involved braking early into a turn and then leaning so far into it that his knee would scrape pavement, burning holes into his leathers. This, along with his efforts to improve safety standards in racing, was one of his most notable contributions and the reason he was so venerated within the racing community.

By the end of his career, Roberts had achieved two Grand National championships, three 500cc world championships, in addition to being one of only four riders in AMA racing history to achieve a Grand Slam. In 1998, he was inducted into the AMA Motorcycle Hall of Fame, and two years later, the Fédération Internationale de Motocyclisme (FIM) dubbed him a Grand Prix Legend.

Following retirement, Roberts formed his own World 500 Grand Prix team and machine, the Modenas KR3. In 2000, his sons, Kenny Jr. and Kurtis, followed in their father’s footsteps and competed in the 500cc and 250cc Grand Prix respectively. Both left champions.