L.A.M.A Dallas Will Change their World, One Cause at a Time

A motorcycle club that became so much more than that

We all ride for a different reason. For some riders, it’s to feel like they’re cutting through the wind, while others will tell you it’s for that surge of adrenaline that shoots through their veins.Despite the variety of reasons behind riding, however, there’s one reason that’s mutually agreed upon. The brotherhood and sense of belonging, especially in a society where the majority of people don’t understand bikers, is easily one of the biggest reasons people ride. It’s that feeling of being a part of something bigger than you, of having friends who know no limits when it comes to what they would do for you.

There are motorcycle clubs all around the nation and around the world that hold onto that brotherhood with an iron grip, and the Latin American Motorcycle Association is no different.

Believe it or not, it wasn’t just deep dish pizza and the “Super Bowl Shuffle” that came out of Chicago. The Latin American Motorcycle Association (L.A.M.A) was founded there in 1977, and its creation and foundation were intended to be a Moto-Touring Club for motorcycle riders. But just as things change with time, L.A.M.A would quickly become a club that represented so much more than that.

In 1995, when the chapter spread to Miami, Florida, it didn’t take much time for that fire to ignite and motivate the chapter to become a National and International Association. As clubs continued to pop up in other states, cities, and countries, their drive and intention shifted. L.A.M.A went from being a Moto-Touring club with just one group of riders in Chicago, to totaling 160 worldwide chapters and setting their eyes on being an International Humanist Association.

They became a club that cared very little about your race, age, nationality, or social class, and more about the kind of riders heart you had. L.A.M.A isn’t all talk and no action, so when it comes to helping the community around them, they show up and work with a passion that should be marveled over. While 2012 was the year that the Dallas chapter took to the roads, they’ve done amazing things in the span of those six years. Ken Morgan, the President of the Dallas chapter and goes by “Tank,” leads the club with a mission of service.

“Since we started in Texas, we now have Ft. Worth, San Antonio, Alamo City, and McAllen chapters. We’re hoping to grow Texas to one of the largest L.A.M.A. states,” he said.  “We help out two battered women shelters, Muscular dystrophy rides, animal welfare, and other rides that people may have. We reach out to communities to promote motorcycle safety, too.”

L.A.M.A recently worked with the Combat Veteran Association to assist military veteran Torrey Morgan. The fence was needed for Morgan to care for his service dog, Shadow. L.A.M.A and Combat Veterans Motorcycle Association members  stayed out all day under the blazing Dallas sun to make sure that Morgan, who needed assistance, would receive the help he deserved.

Their helping hand doesn’t just end there, either. While Cinco De Mayo might mean margaritas for most everyone, L.A.M.A spends the day on a charity ride and hosts an event called ‘Hogs for Paws.' They start their adventure at Strokers, an infamous biker bar, and ride to the American Eagle Harley-Davidson in Corinth, Texas, about a 30-minute ride. All of the proceeds of the ride and after-event hosted at American Eagle Harley-Davidson are used to help support animal shelters in the area. 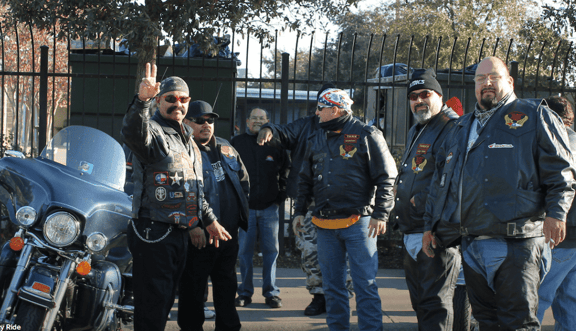 A thriving club intent on helping all those in need doesn’t just focus on the now; L.A.M.A focuses on the possibilities of the future, too. Ken Morgan is hopeful for the impact that L.A.M.A of Dallas can have on the future community:

“By growing our DFW chapters, I feel we can make a change to our communities by starting scholarships for high schoolers, continuing more charity work, and let the communities know bikers aren’t that bad.” 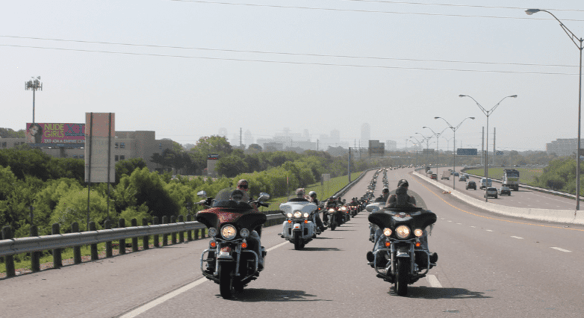 Well, L.A.M.A doesn’t have to prove anything to us. Their actions have given worth to their words, and if their past and present contributions to the community is any indication toward what the future will hold for the chapter, it’s going to be a bright one. For this club, it’s not enough to be a rider; you need the heart and soul of a rider and the willingness to streamline change in your community. L.A.M.A exhibits the selfless qualities that are known to be the habit of true riders, and when it comes to what they’ll willing to do to lend a helping hand, the road is infinite.

Have a motorcycle club that is also doing great things? Do you have a community project planned that you would like featured on The Brain Bucket Blog? Leave us a comment, or contact us through email at logan@rumbleon.com!