A motorcycle blog for all of you who live your life on two wheels. Ride and subscribe to motorcycle articles, tips, DIYs, videos, ultimate lists, and good reads for your dome.

Harley-Davidson: The Foundation Behind Their Image

The Messages Behind Harley's Logos and Slogans

When it comes to motorcycle culture and the history behind some of the most beloved bikes throughout time, most would admit that one brand has been the powerhouse over all others. And while other brands are catching up in design, innovation, and function, this particular brand has ruled the roads for a long time. It’s a name that truly belongs next to the words ‘American-made,' and it has a special place in the hearts of riders everywhere. It’s Harley-Davidson.

Want to trade for a Harley? Get your free cash offer and use it as a motorcycle trade in value.

When it comes to bike brands, many would be hard-pressed not to admit Harley-Davidson has a unique ability to connect with so many people. After all, this brand has cultivated an image that resonates with consumers and surpasses its competition, which is evidenced by its large hold over the market. Harley doesn’t just stand for bikes. No, this brand goes far beyond the beast of metal, power, and engine you sit on. Harley-Davidson depicts a lifestyle.

While many Harley lovers like to think they’re well-versed in the brand, I think our time would be well spent delving  into some of the changes Harley has experienced since its 1903 beginnings. For example, did you know its dominant bar-and-shield logo wasn’t created until seven years later, in 1910? Since then, Harley has seen logo, color, and slogan changes, while still acknowledging its roots. Let's take a look at some of the changes the brand has undergone.

The Harley logo is an iconic one, just like the beloved bikes associated with the name; its logo is even recognized by those who aren’t part of the biker culture. Harley is a household name, and the logo is a bold and assertive one. The shield, which represents a sense of power and authority, is meant to mimic the power and authority riding gives you, the ability to control your own life.

In the past, some of Harley-Davidson's logos have contained eagles with outspread wings. The eagle is supposed to signify freedom, and when you imagine something freeing, many think of the ability to fly. What better to encapsulate this sentiment than one of America's most regal creatures?

Regardless of the variations in logo through the years, most have all kept the classic shield aesthetic. The shield represents strength and stability, which are two things you'd want in a motorcycle. These are also qualities we'd want to see in ourselves, hence the reason why so many bikers feel connected to the logo.

The colors of Harley-Davidson:

While Harley has transitioned from black and white to a stern 'chrome' look, the current orange-and-black aesthetic is much more fitting for the brand.

When it comes to the Harley-Davidson colors, black has been the company's go-to for quite some time. There have been endless studies conducted on how we respond to specific colors. When we see black, for instance, we typically think of elegance, class, sleekness, and simplicity. On the flipside, black can be edgy, too, which is a sufficient way to sum up riding, in my opinion.

Look at this slick, black Harley, for example. We dare you to say that black isn’t a damn near perfect color to explain everything that is ‘riding.' 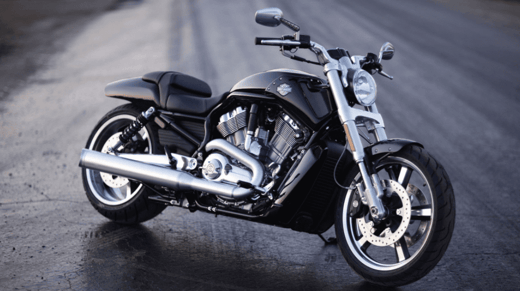 Finally, the orange component demonstrates an awesome balance between being assertive and inviting. After all, we're all friends here, right? The folks at Harley-Davidson sure think so!

Orange is both creative and enthusiastic; it promotes the energy that the black doesn’t. And sure, some people have joked that the color choice is a bit Halloween-centric. But for others, the color choices make sense. While black gives us that simplicity and edge, orange promotes Harley's vibrant personality and energy. And the little bit of white you see around the logo is not lost on Harely, either, as it encourages purity and balance.

And there you have it! Edge, simplicity, energy, and purity: everything devoted fans associate with riding a Harley.

Harley's slogans are noteworthy, which is made obvious by the endless slogan changes the brand has seen throughout its history. If you think it's hard to create a logo that symbolizes a whole culture and movement, try thinking of just a few words to sum everything up. It's way easier said than done. Let’s take a look at the most memorable slogans of the past:

These words might have been one of the strongest choices for Harley. They're simple, but not too simple, and still do justice to the brand. This slogan focuses on the way the road makes us feel. For many bikers, motorcycles aren't just a means of transportation; their bike affords them a lifestyle that’s hard to find anywhere else.

Simple and clear. While not the most famous slogan Harley has utilized, it stays true to the brand. Harley doesn’t over-complicate things. They try not to add unnecessary fluff to their bikes in order to maintain modern efficiency. This slogan encompasses that sentiment.

"Until you've been on a Harley-Davidson, you haven't been on a motorcycle."

Well, okay, this one doesn’t require much explanation. Harley doesn’t merely pride itself on the culture associated with its name. Harley also prides itself on the bikes it creates. Even people who aren’t Harley-Davidson fans can admit the brand does a great job of building bikes that ride like a beast, that bring innovation to the table, and honor that classic Harley style that is so loved.

When life gets stressful, just ride. This is the current Harley slogan, and it’s a bit more blunt and straightforward than those of the past. It emits the sense of being able to escape some of life's mundane everyday problems, even for just a little bit.

And there you have it! I'm sure Harley lovers will find this breakdown interesting, even if it simply confirmed what they already knew about this dignified brand. One thing's for certain, though: when a brand can make you feel something profound, real, and positive, that’s a brand worth admiring, so thank you, Harley-Davidson.

What was your favorite Harley-Davidson slogan? Comment down below and let us know!

All Rumble Ready powersports and used motorcycles for sale come with a full Condition Report, are shipped straight to your doorstep as-promised or your money back, and with a 90-Day Mechanical Guarantee!