Military Motorcycles in the World Wars

Alright class, I need your attention. It’s time for a video history lesson about military motorcycles in the World Wars, because, frankly, this subject is really freakin’ awesome. 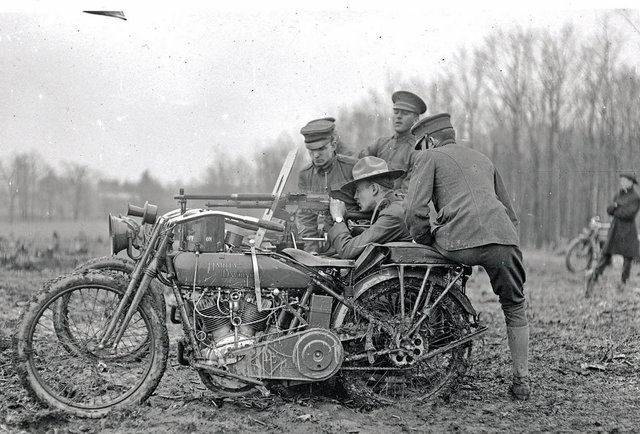 As history shows, in the ages coming up to the First World War, soldiers valiantly rode into battle on horseback. Even at the start of WWI, horses played integral roles in the very first conflict: a cavalry attack near Mons, France,  in August 1914. However, it is during this war that cavalry horses were eventually replaced with iron ones.

Motorcycles first made an appearance prior to WWI in a borderland conflict between U.S. forces and General Pershing, and Mexican revolutionaries. This became known as the “Border War” of 1910–1919, and the Harley-Davidson motorcycles provided to the Americans gave the U.S. a distinct advantage against the horse-mounted Mexican revolutionaries. While these machines were primarily experimental and not widely used at the time, their benefits were seen very quickly. Innovations such as machine gun-mounted side cars proved to be advantageous, so, by the outbreak of WWI, motorcycles were poised to play a prominent role. And they did.

Motorcycles saw their first large-scale deployment in the years of WWI, otherwise known as the Great War, and entire infantry units were rapidly mobilized. With motorcycles, machine gun crews could quickly get into position, reconnaissance efforts were boosted, and the time taken to run medical and ammunition supplies to the front lines was significantly reduced. Motorcycles continued their relevance in combat in every theatre of WWII, the Korean War, Vietnam, and even present-day warfare.

I could talk all day about this stuff, so check out this video which showcases some of the most popular models and brands used in the World Wars. I managed to find actual military footage and training films, so this is for all you fellow history buffs out there! If you want to read more about the use of Harleys in WWII, check this out.

Note from the author: I don’t know about you, but Memorial Day is a very special holiday for me. Coming from a military family, I love that our country takes time to reflect on the brave souls who fought and died for our freedom. I have the utmost respect for our military; they are truly what makes our country great. This Memorial Day, I salute you, and thank you from the bottom of my heart.