The Most Expensive Motorcycle Ever... is a Harley

How about this for some motorcycle trivia: you know the Swiss watch brand Bucherer, one of the most expensive and popular brands out there right now? The one that has an average watch price of $30,000? Yeah, I don’t either. But their partnership with one of our great founding fathers (no, not Washington, I’m talking about Harley-Davidson) the watch brand has become a household name.

The Swiss watch brand and American-brand Harley teamed up to create a motorcycle that looks like it’s fit for the Gods. And while I’m pretty sure the reason the bike was created was for Bucherer to show off how much money they’re rolling in, it’s a show of arrogance I’m okay with. I took one look at these pictures and already had some clever names running through my head (Cobalt Cobra? Blue Steel? Sherry?), and then I checked the price tag.

All of a sudden, my dreams came crashing down, as I realized that I would probably have to sell a kidney, my heart, and maybe my soul to get a hold of this bike. The price? Eh, just a measly $1.9 million. That's one expensive bike. I pondered over perhaps switching the pool boy from every week to every other week to save some money, and then I realized that I don’t have a pool boy...or a pool.

Ah, but it’s a steal, I tell you! Because you don’t just get the bike for $1.9 million; you get two watches thrown in there, too. If that’s not one heck of a deal, I don’t know what is. 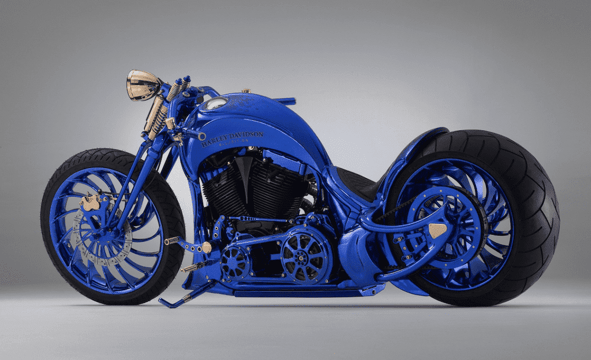 This ride was designed entirely with the watch company in mind, and you can see it easily with the look and feel of the bike. It’s slick, it’s clean, it’s elegant, but it’s ridiculously extravagant and over-the-top. Bunderbike, the Swiss customs house that helped to make this a reality, was able to incorporate 360 diamonds into the bike. And while I’m sure that the shining diamonds under sunlight are likely to cause multiple accidents, why worry about safety when you can show off how much money you have? 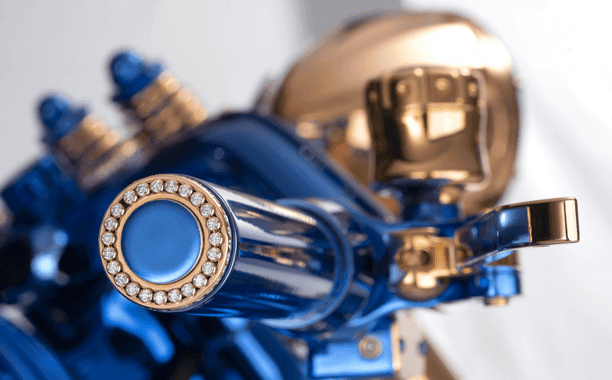 It’s equipped with gold screws and two glass safes for you to store all your super expensive belongings. Basically, my walmart-chic wallet should feel very at home on this bike. The design mimics a Harley Softail Slim S, but the bikes don’t even look like they’re related anymore due to the 2,500 hours of labor put in to create this custom ride. I mean, I guess they decided to be a little more realistic with their headlights, because, after all, instead of plating them in gold, they plated them in rose gold. Because, as we all know, gold-plating is just being ridiculous.

The handlebars are encrusted with Bucherer diamond rings, because why the hell not? 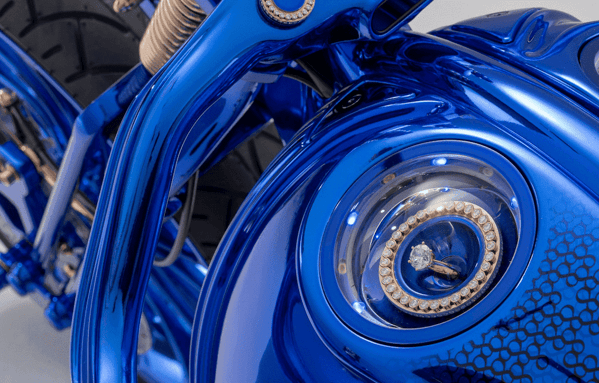 
In all seriousness, the bike is so over the top that it’s just insane. And while I might think anyone that buys this bike has probably lost a marble or two, that doesn’t mean that it’s not fun to look at. Because, honestly, when it comes to custom work like this, the whole point is for it to be nice to look at, is it not?

If there’s one thing that’s certain, it’s that the price of this Harley sure as heck makes all other Harley's seem like a steal. If you’re looking to save up for this, you can achieve it! Just save $5 a day for about, well, 1,000 years and you’re almost there. Believe in yourself!