Dallas Motorcycle Clubs Help a Veteran and His Service Dog

Motorcycle clubs come to the aid of Morgan family and their rescue dog, Shadow:

The biker community is one that is incredibly unique and unlike any other out there. They are some of the most giving, thoughtful, caring, and compassionate people that you’ll ever have the privilege of meeting.

They hold the things and people that matter to them incredibly close, and they’re willing put in an impressive amount of physical and mental effort towards the things that are important to them.

While there’s a variety of things we love about this community and culture, but the love and support shown toward fellow motorcycle riders and those in need tops the list. Because many groups of people claim to care about those around them, but they hardly ever show it. Talk is nothing when compared to true action. But for the biker community, it’s not about the recognition or a pat on the back. What gets them going is knowing that their time and effort means something to someone else.

Morgan, a Vietnam Air Force veteran, found himself in a difficult situation when bureaucracy and his lack of a sturdy backyard fence prevented him from getting a service dog. Due to city ordinances and requirements, some wood and nails were the roadblocks in the way of Torrey welcoming a new fur friend, a rescue named Shadow, into his family. L.A.M.A and C.V.M.A heard about what Morgan needed, and stepped up to the plate to make it happen.

When we all think about the military veterans that have and continue to fight for this country, they deserve more than we can ever give them. There’s no amount of giving that will ever sufficiently thank them for their bravery and sacrifice. But that doesn’t mean organizations like L.A.M.A and C.V.M.A, will ever stop doing so.

On Saturday, L.A.M.A and C.V.M.A came together to make sure that Torrey, Bobbie, and Shadow got the fence they needed. The temperature reached 87 degrees, and the Dallas sun was beating down as bright as always, but that didn’t stop these guys. Decked out in their heavy leather, black riding vests, they got the job done.

View the Album! L.A.M.A and C.V.M.A of Dallas Build Fence for Disabled Veteran

Leonard Clemens, also known as “Preacher,” from the Combat Veteran Motorcycle Association, was more than glad to lend a hand. “Torrey is an Air Force veteran,” Clemens said. “Our motto is ‘helping vets.’ We learned he needed his fence replaced, so we’re working with L.A.M.A to do it.” 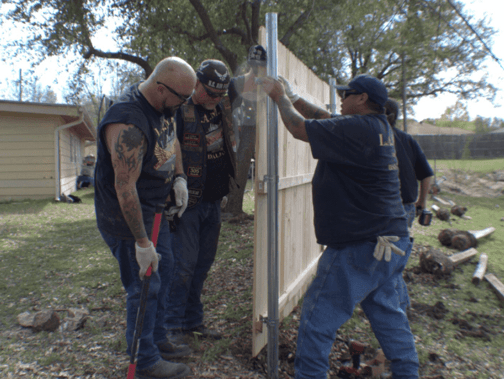 “We’ve supplied the lumber, and they’ve supplied the labor,” Clemens continued. “Even though we’re a combat veteran association, we don’t differentiate between the kind of veteran. Our opinion is, you enlisted and served honorably, and if you need something, we’re going to do whatever we can to help you out.”

It didn’t take much to see that Torrey and his wife, Bobbie Morgan, were thankful for the efforts made. When asked how he was feeling about the whole process? 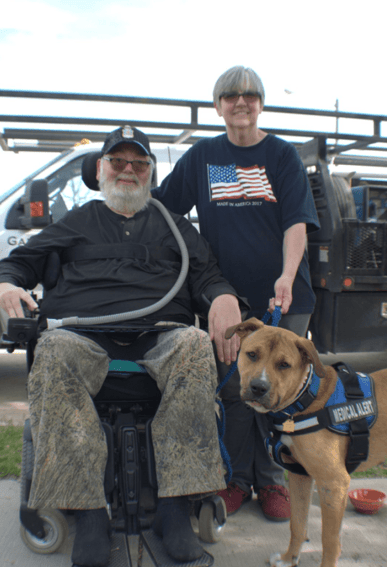 “It’s been a great experience,” his wife, Bobbie, added. “Everyone is very nice, really sweet, and helpful. We appreciate both groups and what they’ve done.”

As a Vietnam veteran, Torrey is no stranger to helping others. “We’re not used to being on the receiving end,” said Torrey. “We’re just very happy with the whole experience.”

The construction involved a lot of hard work, but it couldn’t have been for a better reason. “We’ve built fences for the battered women shelter in Garland, Texas,” said Dallas Chapter L.A.M.A President, Ken Morgan. “They knew we did that, so here we are. We’ve been out here since around eight in the morning, and we’ll be here until the sun goes down or we drop!” 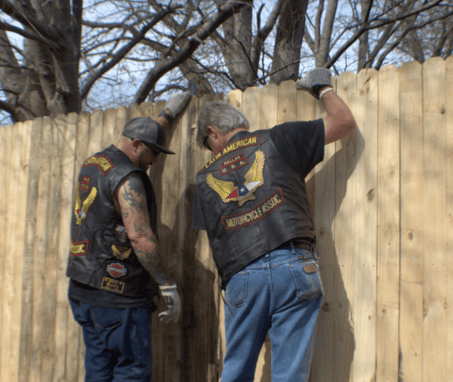 L.A.M.A and C.V.M.A weren’t the other ones involved with helping, though. Eugene Chambers, a current L.A.M.A member and Co-Owner of AE Garage Door and Gate, jumped in to do what he could. “We’re providing the equipment to install the fence,” he said. “I’ve been a part of L.A.M.A for a while, and they asked me to help.”

Because of the Texas sun beating down on these guys, it wasn’t an easy process. But sometimes things that are really, truly worth it aren’t easy. “We’re tired, but it’s all about helping out and being with brothers,” says Reynaldo Lara, the Dallas Chapter L.A.M.A Vice President.

L.A.M.A Road Captain, Jim Cagle, later chimed in. “We feel very accomplished today, helping out a veteran,” he said. “It’s a good atmosphere and the teamwork has been phenomenal.”

It’s actions like this that allow us to have a little more faith in the world that we live in. This especially rings true when it comes to the sacrifice our current and past veterans have shown, all in the name of freedom and personal safety for all those that call themselves “American.” We’ll never really be able to adequately portray our thankfulness for what our veterans have done, but this is at least a step in that direction. There are things in this world that sometimes force us to question everything. So when something like this happens, and we’re lucky enough to see it unfold, we consider ourselves lucky and thankful to be a part of something so amazing.

Sometimes, all it takes is for us to stop and think about someone other than ourselves. When we manage to achieve that, as these men have shown, we can gain a sense of empathy that allows us to consider others. And a world where people are considerate with one another, and show care towards them, is a world that we’re proud to be a part of. 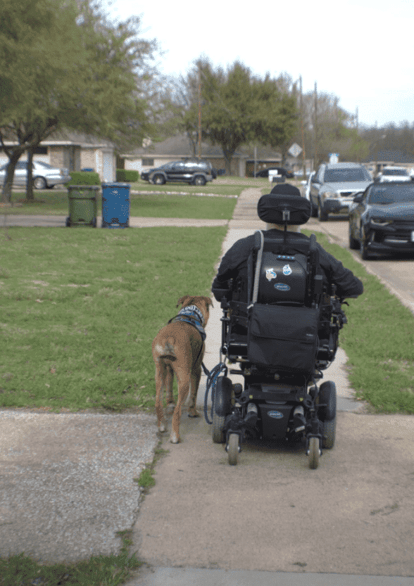 Be on the lookout for more RumbleOn coverage of community events, and if you want to learn more about L.A.M.A and C.V.M.A, or what they do to help the community, check out their sites!

Does your motorcycle club have a community project planned that you would like featured on The Brain Bucket Blog? Leave us a comment!