Value of the Ride: How a Motorcycle Depreciates

Motorcycle Depreciation: How Much Is My Motorcycle Worth?

By now, I’m sure you know which way I lean when it comes to buying new vs. used motorcycles. Can you blame me, though? Especially when you take motorcycle depreciation into account for a new bike? Oof.

All things considered, though, I understand that details like depreciation may never factor into someone's purchasing decisions. After all, depreciation happens wayyy down the road, right? Well, not exactly.

Trade a motorcycle online and get a new ride shipped right to your door!

What is the depreciation rate on a motorcycle?

According to the ‘BikeSocial’ page on Bennetts, a brand-new motorcycle’s value drops nearly 20 percent during the first two years of ownership, and this figure doesn’t even include mileage or overall condition. The biggest hit to value typically occurs during the first year of ownership (unless you own a sports bike or tourer), with a depreciation loss of 12.5 percent.

To put this into perspective, let’s say you’ve just purchased a $12,000 bike right off the showroom floor. Then, 12 months later, despite your attempts to keep it pristine and running smoothly, your bike is now worth $10,500—that’s $1,500 less valuable than the day you bought it. Ouch.

Normally, I’m not one to split hairs over a bike that’s worth $10,500; but, when that same bike was worth $1,500 more the previous year, I have to wonder if the owner had the foresight to do a little bit of digging on motorcycle depreciation before making the purchase. I’m betting not, which can be said for many consumers, unfortunately.

How much is my motorcycle worth years down the road?

Sadly, your brand-new bike is going to continue depreciating pretty significantly the first 3-4 years you own it. The good news is, is that when the bike is 5-6 years old, the depreciation rate on bikes begins to stabilize, and, this time, mileage and condition are taken into account. Now, instead of losing $1,000 or more as your bike ages, the depreciation value gets cozy in the $300-350 range per year (you can stop kicking yourself now).

Factors That Contribute to Depreciation

As we said above, depreciation and motorcycle resale value depends on different factors, so let's dig in a little more to the specifs.

What are the advantages of buying new vs. used motorcycles? 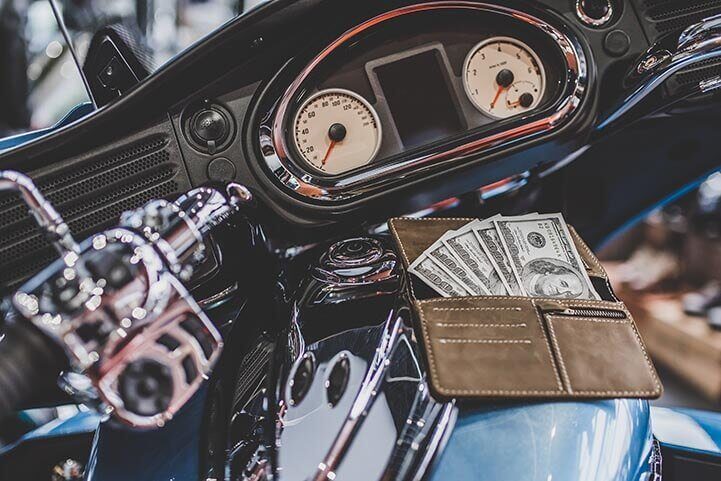 At the end of the day, what’s considered an advantage to one person may be considered a drawback to another. For example, some people think, "If I buy used, then I’ll keep more money in my wallet, but the bike won’t feel like my own." This is more or less true. But if you’re willing to put in the elbow grease to customize it, then I’d say you do you!

When you buy used, not only are you saving money in terms of the cost of the bike, you’re also avoiding the regret the original owner is likely feeling after calculating just how large their depreciation loss was during the years the bike was still considered ‘new.’ Used motorcycle values just can’t be beaten in the long-run, folks.

Are there motorcycle brands that depreciate faster than others?

There are, actually. According to InsuretheGap.com, new models by Honda, Yamaha, and BMW tend to depreciate faster than other brands, at a rate of 27, 22, and 20 percent respectively (percentages were determined by calculating the mean depreciation value of different models within the Honda, Yamaha, and BMW brands, between the years 2015 and 2018). But don’t let this deter you from buying one of these babies used!

Perhaps even more important than the brand, though, is the type of bike you’re considering, because what’s ‘in’ one day might not be the next, which has a huge impact on supply and demand (or oversupply and not enough demand), and, consequently, on depreciation value.

Itching to know what your bike will be worth down the road? Check out The Truth Behind Buying a Brand-New Bike on the Brain Bucket Blog and do the math!

Want to sell a motorcycle the easy way? Do it online!

Sell a motorcycle for cash to a ready buyer, RumbleOn will buy your bike on the spot!