The Fascinating Mystery of the Rarest Motorcycle on Earth

The Mystery and History of the Traub Motorcycle

We begin this mystery in a dusty, forgotten space behind a wall. In 1967, a plumber was called to a repair job at a house in a Chicago suburb.
Here, in this untouched space sat a mysterious motorcycle. It had been walled up and left there since 1916, and here is where the fascinating plot thickens.

This is thought to be the rarest model in all of motorcycle history. It's called the Traub motorcycle, and it is the only one in existence. Sure, there are plenty  of classic bikes and one-offs out there, but what makes the Traub the rarest motorcycle is its brilliant engineering, and it's the sole one of its kind. Its construction was well ahead of its time, and it still runs today. 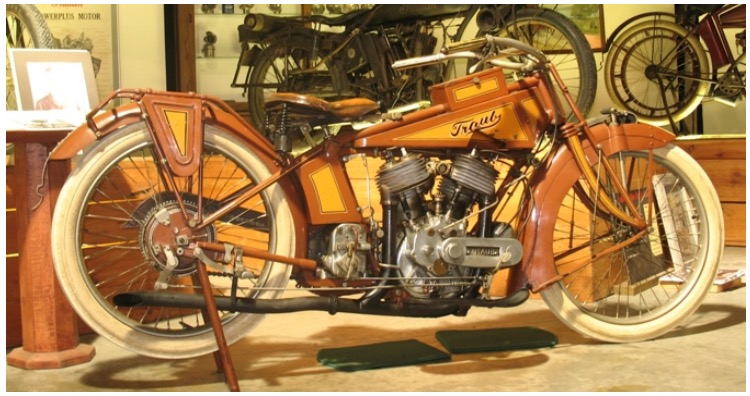 Photo Source: Wheels Through Time
Who is responsible for such a mechanical marvel, you ask? Well, no one's sure who made it.

When the Traub motorcycle was first discovered in 1967, the former owners of the home were tracked down. The previous owner revealed that their son had stolen the motorcycle in 1916, presumably from the Traub’s original owner and creator. As the story goes, the father was so enraged at his son's act of thievery, that he forced him to enlist in the Army. Given that this was in the throes of the First World War, the son was then sent to fight and tragically did not return. 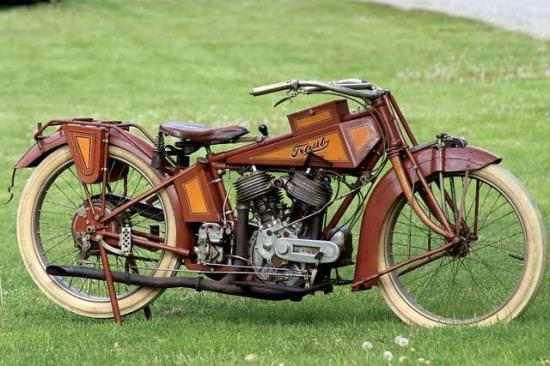 Photo Source:  Motorcycle Classics
One could venture to guess that perhaps the son, knowing he was about to be sent overseas into battle, hid the stolen motorcycle so that he may return to it. The hiding place must have been secret, and when the son was killed in action, the secret died with him.
And so the bike remained, untouched for half a century.

The Traub motorcycle was in good condition when it was discovered in 1967. In fact, it still runs to this day. After 50 years in the dark, the white tires only needed to be aired up and wiped with Armor-All; the engine seemed virtually new, and there wasn’t a spot of rust on the orange and butterscotch-brown paint. Someone well ahead of their time used their skill to create this masterpiece, but who?
The identity of the Traub's creator has been frustrating historians for years. While the name of the man who could have been the bike's creator has likely been found, it is impossible to say whether it is a definitive answer.  It’s time to get into the nitty-gritty of my research, and it all starts with a man by the name of Traub.
Gottlieb Richard Traub was born in America but was of German descent. Correspondence from a “Richard Traub” to the editor of Motorcycle Illustrated was printed July 1907. The letter's author lists his address at North Paulina St., Chicago, and talks about his homemade four-horsepower motorcycle. A photo is included: 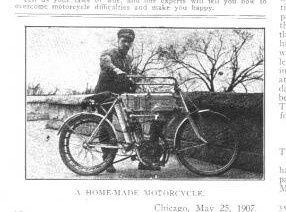 He writes:
“Dear Sir – ... find the enclosed picture and specifications of a motorcycle made by myself throughout engine and all. I worked on this cycle about one year, putting in the time only between 7 pm and 11 pm. I also worked Sundays.
Specifications – Wheelbase, 55 inches; tank capacity, 3 1/2 gallons gasoline, 1 gallon oil, sufficient for 125 miles; power, 4 horsepower; bore and stroke 3 1/4 by 4 inches; auxiliary gasoline tank, 1/2 gallon; speed, more than the roads will stand; perfect grip control; throttle and spark motor is geared 3 3/4 to 1; it has a cycle chain with washers and does good service; has never troubled me yet, and I rode all of 1,500 miles."
Interestingly, the specs he lists in the correspondence are similar to the motorcycle by the same name that was discovered within the wall. Historical research could further connect Gottlieb Richard Traub with the makings of motorcycles. 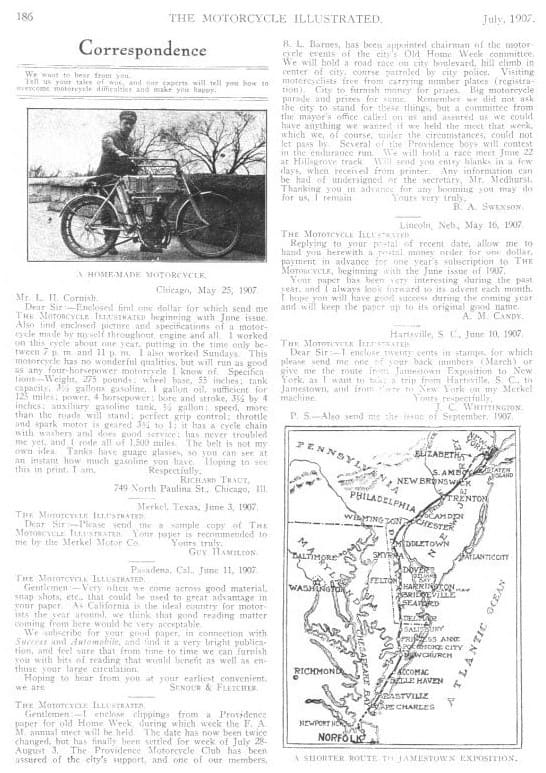 According to the 1910 census, the 27-year-old Gottlieb Richard Traub lived at 1520 North Paulina St., Chicago, and was a toolmaker at a factory. Later, on his WWI draft registration card in 1917-1918, he stated that he was a self-employed experimental machinist.
Experimental machinist, you say? At a motorcycle shop, perhaps? 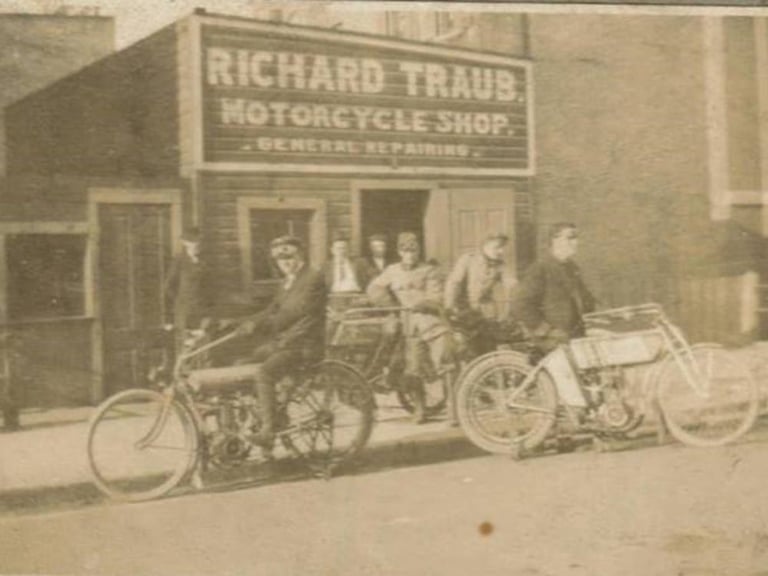 This photo shows the “Richard Traub Motorcycle Shop.” The date and location of this picture are unknown (believe me, I tried), but census records state that our mysterious Gottlieb Richard Traub worked out of an attached garage on his property. One could venture to guess that this is his shop and it might be the one located at the back of his residence on North Paulina Street. North Paulina Street is also not far from where the bike was found walled up in 1967.

If these two motorcycles are both creations of the same mind, it shows. These bikes could be the predecessors of the Traub Motorcycle that was found in 1967.  It's not a stretch to think that Gottlieb Richard Traub could have tweaked his creation for improvement between 1907 and 1916 and arrived at this beauty:

The Traub's technology was decades ahead of other motorcycles produced at the time, including a unique twin-brake/single-cam system that has not been seen on any other American motorcycle to this day.

The 80 ci V-twin engine of the 1916 motorcycle yields a capacity of 1,278cc. This was absolutely huge compared to other motorcycles at the time. For example, the 1919 Indian Scout was 500-745cc, and the 1919 584cc Harley-Davidson Model W three years later. The Traub could also easily reach 85 mph, which is also years ahead of its time. Pair this with the fact that the homemade Traub motorcycle was all built by hand, and you might begin to realize how awesome of a bike this truly is.

Where is the Traub now?

Soon after the Traub Motorcycle’s discovery, a Chicago motorcycle dealer named Torello Tacchi traded a $700 Suzuki for the Traub and restored it to perfect condition. About ten years later, Bud Ekins, the stuntman for ultra-cool movie star Steve McQueen, was in Chicago filming for the “Blues Brothers” movie. He purchased the Traub from Tacchi and later sold it to California bike collector Richard Morris.
Video Source: Neal Pressman
The Traub changed hands one last time before landing in Dale Walksler’s collection in the Wheels Through Time Museum, where it remains today. Amazingly, the 101-year-old Traub still runs perfectly, and Walksler even takes it out on an occasional joy ride.
If Gottlieb Richard Traub truly was the creator of the mystery motorcycle, it's apparent that he put a lot of time and effort into the prototype. It makes you wonder if the Traub was stolen, why wasn't it reported? There are no records or police reports that indicate Traub tried to locate the missing motorcycle, which deepens the mystery. Gottlieb Richard Traub died in 1952. Sadly, the engineering genius and explanation behind the motorcycle that bore his name possibly died with him.
I wonder, if Gottlieb Richard Traub had actually gotten to market his revolutionary motorcycle, where would history have taken the motorcycle industry today?