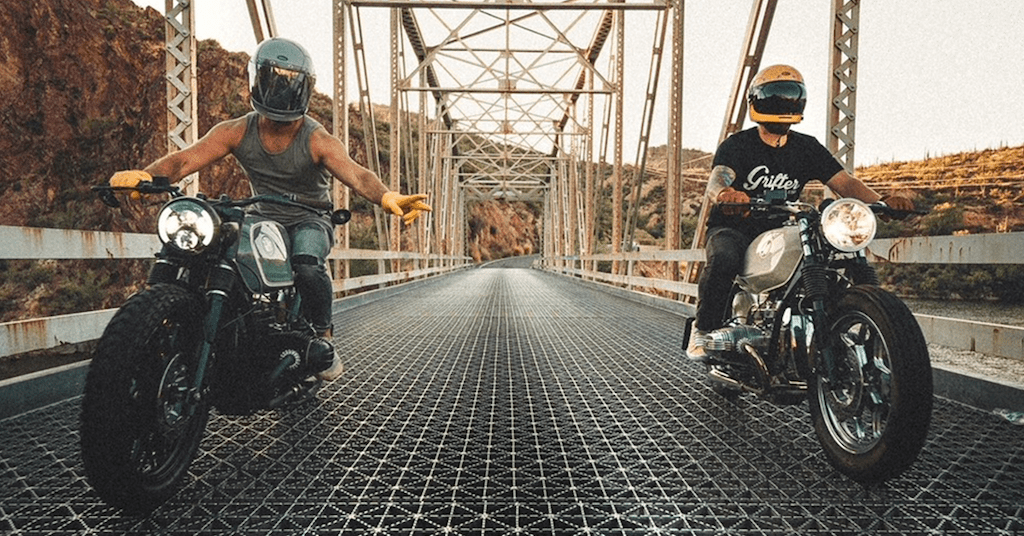 Why did you choose the BMW R100 series to customize?
Vintage has always spoken to me more than modern vehicles. So much so that I started a company building out vintage vehicles and motorcycles called WYLD Garage Co.. W.Y.L.D. standing for What You Love Doing / What You Love Driving is a passion project I started after selling one of my companies.

I wanted to spend my time doing what I love, hence WYLD was born. My main vehicle where I live in Scottsdale, Arizona is a 1972 Ford Bronco. Naturally, I also needed to keep my choice in motorcycles inline with that. I became infatuated with the BMW R100 series motorcycles and needed one for myself.

When perusing Instagram back in 2016, I started seeing a trend with European custom builders taking the BMW R100 and using it as their platform to transform this dated touring bike into what appeared to be a WWII inspired Cafe Racer / Scrambler. Something Steve McQueen himself would drool over. I was inspired by world renowned builders such as Arjan van den Boom from Ironwood Customs out of the Netherlands and Nuno Oliveira from Bandit Garage out of Portugal. Both with their own yet similar renditions of design built off the BMW R100.

Taking this inspiration, myself and the WYLD team began designing and building out our own style of the R100 which we call the single saddle seat design the WYLD Defender and our two seater the WYLD Pioneer. Along with this evolution of builds we have also been fortunate enough to now be Arjan’s exclusive partner for all Ironwoods customers located in North America where we build out his BMW R100 models including the Deathstar, Mutant, and Narcotic.

We’ve had so much success building our own WYLD designs in addition to the recognition we’ve received from Arjan, that we have recently built out a motorcycle for Ben Affleck for his birthday that has been featured in People Magazine, Vanity Fair, Entertainment Tonight, TMZ and hundreds of other publications. I am now fortunate to always have at least a few BMW R100’s whether a WYLD Defender, Pioneer or an Ironwood Deathstar or Mutant nearby to ride at my disposal. You’ll often times find myself and the WYLD team logging miles on our new builds and performing safety and quality checks around the lakes, national forests, and even the Grand Canyon here in Arizona. 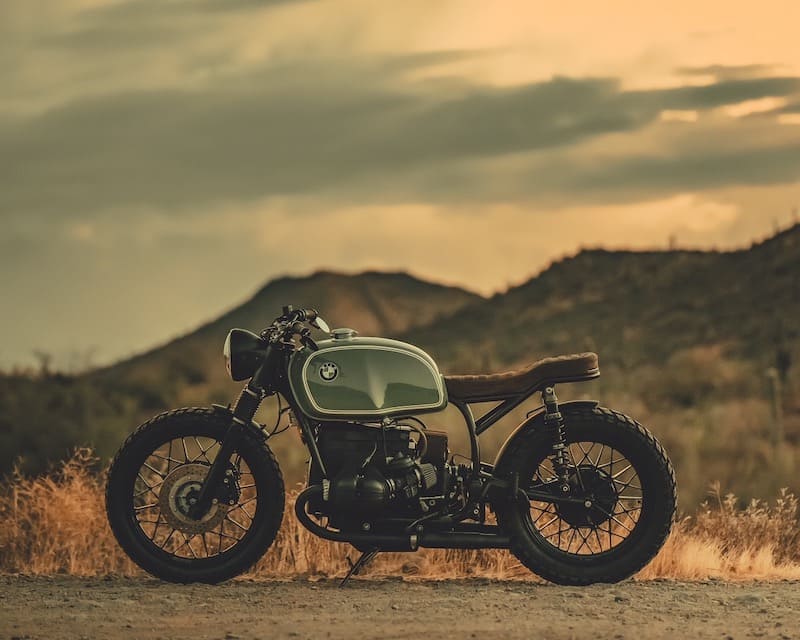 How did you get into riding?
I started riding as a child around the age of 8. When I was very young, a motorcycle wasn’t in the budget, so I would go to a friends house and one of his enduros or dirt bikes. Once I was old enough to begin working summer jobs, I saved up to buy a vintage Yamaha 125. The thing barely worked and it was pushed as much as it was ridden. Finally after a few summers of saving I was able to upgrade and purchase a Honda 450 Quad around the age of 14 that I got from a friend's uncle that previously raced.

Being from a small town in Washington State where everything was surrounded by forrest, trails, and old logging roads, my quad quickly became my main mode of transportation. There were hundreds of miles of trails I could ride from my backyard. I would ride to my best friend Justin’s house where we would trade off the quad for dirt bikes, I would ride to my girlfriends house about 30 miles away to secretly have overnight sleepovers and I would ride out to Mt Saint Helens for the thrill of the ride and adventure. Often times disappearing for hours and sometimes days.

Riding quickly went from a necessity to a lifestyle. As I got older and purchased my first car, riding motorcycles and quads became less and less until I moved from Washington to the Gold Coast in Australia for University and work. Being a student on a college budget, I couldn’t afford a car, so again I found myself using a motorcycle as my main method of travel. This added to my Australian experience and turned it into an adventure cruising around the Gold Coast and Byron Bay.

What inspires you to ride?
It truly is what I love doing. Riding allows my mind to relax, wander, become enlightened, and it fuels my creativity and passion for all things that make life what it is. I am an entrepreneur at heart so sometimes my mind tends to run wild and riding is a way to find balance.

Why did you start your Instagram account?
I started my personal account out of passion and as an outlet to share my adventures and passions. We started @wyldgarage as a way to highlight our incredible WYLD machines and to share the story and passion behind WYLD Garage.

Tell us about the most exciting adventure you’ve taken on your bike
As a child I would have to say it was each time I took the 30 mile ride from my home to my girlfriend's house through an intricate set of logging roads, trails, and private property. There was one quarter mile stretch where I had to pass through some private land where my friend Kirk’s great aunt lived. Although I had met her numerous times while fishing her private lakes, she never remembered me telling her that I was the kid riding my quad through her property to get to the other side of the river. My first attempt riding through, I recall hearing some sharp “snap” noises from behind, but dismissed the sounds. Another time I heard the same sounds, I turned to look back at my friend's great aunt's mobile home only to see her outside with a raised rifle pointed in my direction firing shots.

Being blinded by teenage love, it didn’t stop me from riding through her property nearly weekly. I would cut the motor and coast down the hill to her house so she couldn’t hear me coming and as soon as I got near her front door I would turn on the motor and ride as if my life depended on it,  because it did. Whether I had luck on my side, she was a bad shot, or I was dumb and in love risking my life is still open for debate. 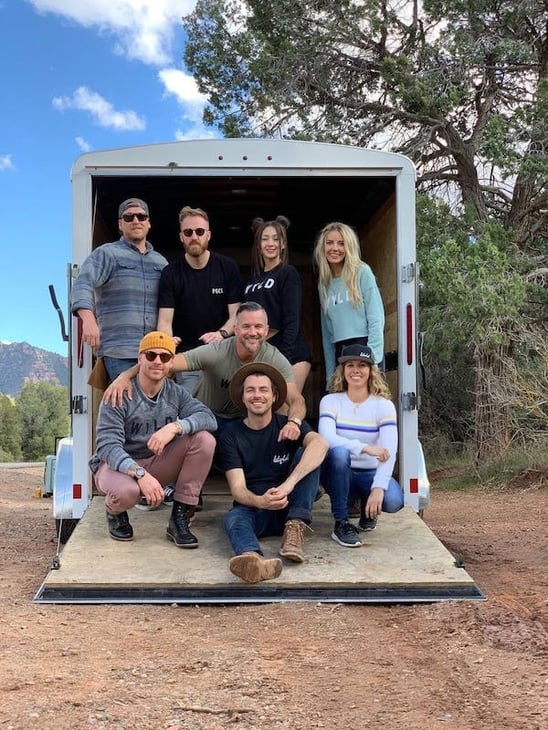 Second to those experiences, each time myself and the WYLD Garage family take our new builds out for their maiden voyage is always an exciting adventure. We try to pick a new location in Arizona each time so not only are we riding something that we have artfully created through our collective efforts, but we are also exploring a new part of the state we’ve yet to explore. Often times it is combined with a few days of camping which encompasses our WYLD brotherhood and sisterhood we’ve formed over the years.

Is there anything else you’d like to share with our audience?
I encourage everyone to be a part of the riding community. Search for local meetups, often times there are riding groups that will meet at coffee shops and plan group rides. For female riders or females looking to get into riding, I encourage you to seek out groups like Babes Ride Out (BRO). For all riders looking to have a fun nostalgic ride while meeting great people check out Distinguished Gentleman’s Ride (DGR). This is an incredible platform to bring riders of all levels together while raising money for a good cause and have raised over $27 million for charity since 2012.

Lastly, be sure to support your motorcycle artisans through following, liking, and commenting on their social media. Whether our WYLD builds are your cup of tea or not, there are thousands of custom bike builders sharing their art and their story through social media. Give them a like and an encouraging comment. It’s what we all live for.

Keep up with Nathan and WYLD garage on Instagram to see the latest BMW builds!