In a World Full of Too Many Neglected Pups, No Borders Bulldog Rescue Is Changing Things

Abused, neglected, and even abandoned dogs are a problem in every city, and especially in a burgeoning one like Dallas, Texas. To do their part in finding every pup a good home, No Borders Bulldog Rescue works hard to ensure every good four-legged boy and girl finds their forever family. On Saturday, the rescue group hosted “Pawdi Gras” to raise money, ride motorcycles, and have some fun. 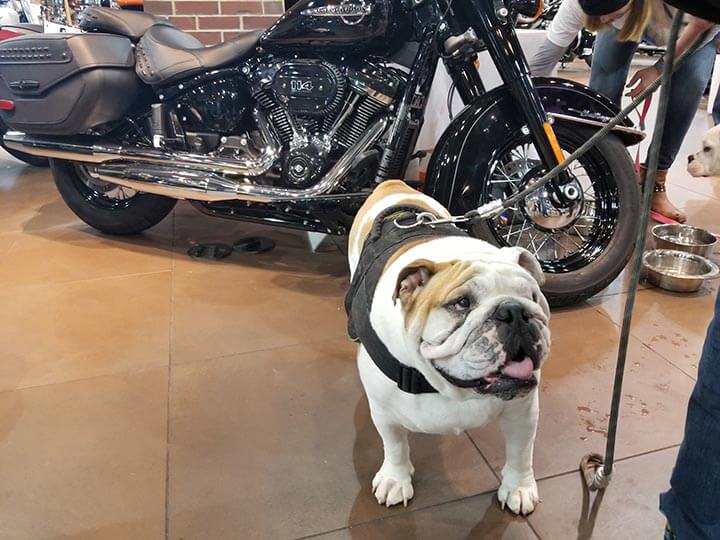 The Pawdi Gras event was a doggone good time.

One of the coolest things about No Borders is that they often hold outdoor events all over North Texas, and, since a lot of the charity’s volunteers are avid motorcycle riders, Maverick Harley-Davidson seemed like an ideal spot for their next fundraiser.

Over the weekend, No Borders Bulldog Rescue helped sponsor a Mardi Gras event like no other – Pawdi Gras. From 12 p.m. until 4 p.m., it was a doggy free-for-all, with pups from all around the Dallas/Ft. Worth Metroplex at Maverick Harley-Davidson.

NOTE: If you're on mobile, tap the blue full-screen icon to view the full slideshow!

No Borders’s Founder and Director Troy Gaylor said, “Several of our volunteers have motorcycles. We are always looking for places to hold events and this seemed like a unique opportunity. A year ago, one of our volunteers went in and asked Maverick Harley-Davidson if they’d be willing to help us out.” The dealership agreed to host a trial event in the fall of 2018 and it was a huge success. “The rest, as they say, is history,” Gaylor said. “Maverick is wonderful, and [they] absolutely love all dogs, so it was a match made in heaven.” 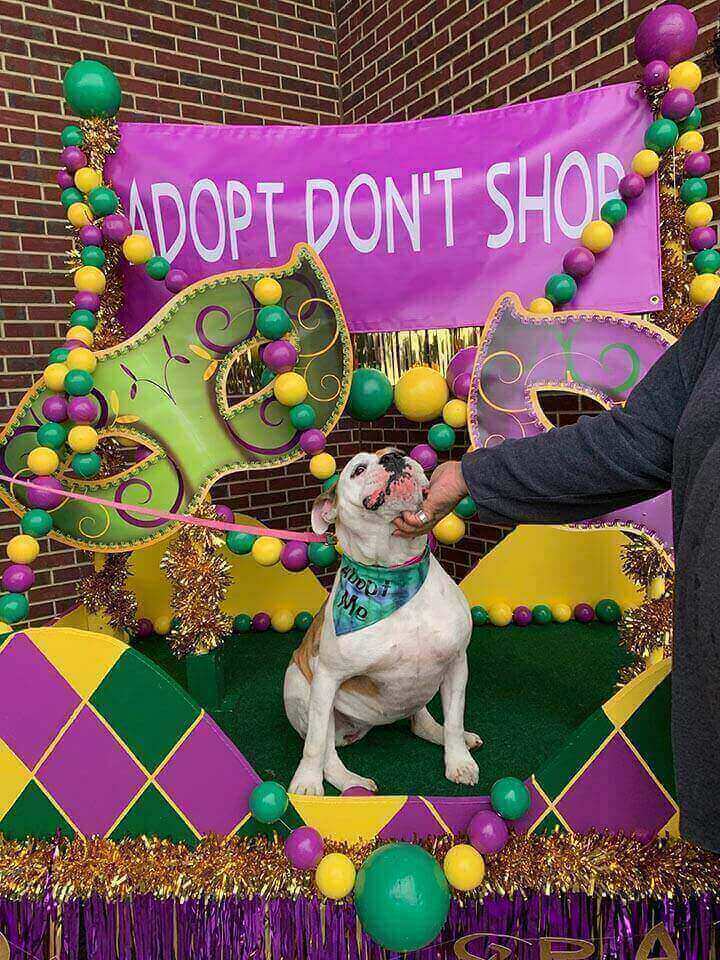 Aside from all the music, food, beer, and fun, there was a dog parade featuring all kinds of breeds. That’s right—a Mardi Gras-inspired parade with pups as the participants, dressed in all sorts of festive costumes. There were custom-made floats using wagons, carts, strollers, and anything you can think of that has wheels. Everyone really enjoyed themselves and the dogs seemed to have just as much fun as their humans.

“We plan on making this an annual event,” Troy said. “It’s taken a lot of work and man-hours to make this happen. While we may not knock it out of the park this time around, we’re hoping word gets around and more people get involved for future events.”

If more volunteers pitch in, there’s no doubt Troy and his team will see future success with each one of their events.

Who is No Borders Bulldog Rescue?

Bulldogs are their life. Each year, hundreds, if not thousands, of Bulldogs are lost, abandoned, abused, dropped off at animal shelters, or surrendered to rescue. It’s a sad fate for these dogs as most will never see the outside of a shelter. No Borders accepts all Bulldogs whose owners can no longer keep them. On top of that, they work with local shelters and animal control officers to retrieve Bulldogs from bad situations. They provide the necessary physical, emotional, and behavioral care for each Bulldog to help prepare them for a new life with an approved adoptive family.

To start, they’re a certified 501(c)(3) non-profit organization. It’s operated by, and completely driven by, volunteers. No corporate backing, no private donors, nothing. People who want to help in their free time are the backbone of this operation.

“In 2016, we started with three total volunteers that used to work at another rescue, “ Troy says.  “There were, unfortunately, some differences of opinion in how the dogs were being treated and other issues, so I gave up on rescue altogether.”

An avid lover of Bulldogs, Troy knew not being involved in a dog rescue wasn’t his calling. So, naturally, he decided to get back into it. “It was about six weeks before I got back into it,” he said. “So, we decided to found our own rescue. Our priorities were and continue to be that dogs come first and everyone, including the dogs’ volunteers, is treated with honesty and transparency.”

In just three years time, Troy’s team has grown to between 135 and 150 volunteers. While they do receive corporate sponsorships, they receive no government funding, hence the 501(c)(3) designation. “We’re completely grassroots,” he said. “Everything we do is based on volunteers. All of our dogs are surrendered, strays, or from shelters, and vary between English, Old English, and French Bulldogs.” 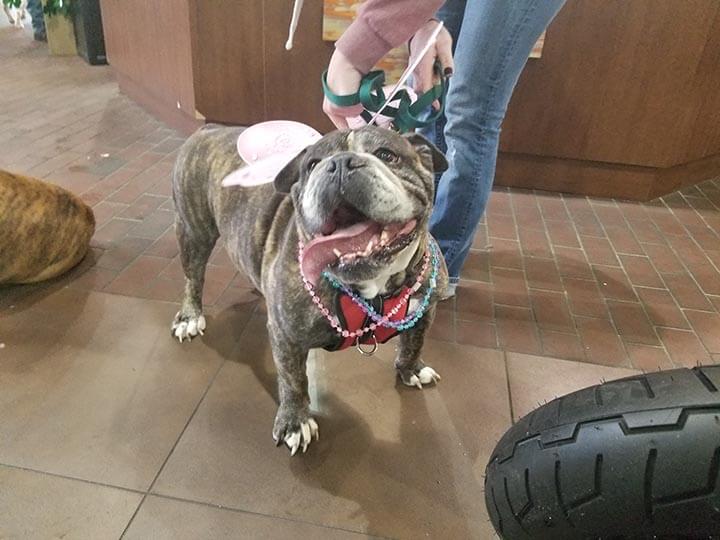 Troy is a dog lover through and through, and you can tell by the excitement in his voice as he remembers his past. “I got my first English Bulldog 17 years ago. When I was in college, I took care of the dogs in my fraternity. Once I graduated from college, I bought myself a dog. Now I own four and one is a foster.”

Being a dog lover, especially of English Bulldogs, Troy understands why so many owners give up their Bulldogs. For those who have never owned or been around them, Bulldogs are the recipients of bad breeding and other health conditions. Because of this, a Bulldog’s average life span is a mere eight years. That’s where No Borders comes to the rescue with a unique approach to taking care of the dogs. “We don’t put the dogs in cages. They stay at people’s homes who look after the dogs,” Troy said. “It takes a special personality to take in these Bulldogs. They’re very smart animals, but they require some extra attention.”

No Borders Bulldog Rescue has a mission in mind, and it’s to help our four-legged friends.

As is the case with any non-profit, there are goals in mind. “We have three points of emphasis we like to get across: First, give the public the opportunity to meet the dogs and provide education,” Troy said. “Second, get the No Borders name out there to capture a wider audience. Third, to fundraise as much as possible. We have merchandise including T-shirts, wallets, bags, and more.”

No Borders helps between 60 and 100 dogs get adopted each year and wants to double or triple that number each year. It’s all about educating the public on Bulldogs and what to expect when you own one.

I asked Troy a simple question; what do you want others to know about No Borders Bulldog Rescue? His answer was simple: “We’ve gotten a lot accomplished with a small group. I’ve always said, ‘it takes a village,’ and I’m seeing it in real-time. We have a lot of great people out there that help us remotely with marketing, web design, and more. They’re passionate people who care about what we’re doing. And, they’re all relatively young and at the ground level.” It’s a true labor of love for Troy and one that is near to his heart, especially as a dog lover.

Want to trade in a used motorcycle? It's time to RumbleOn!

RumbleOn welcomes trades of all kinds, and we have a full inventory of Rumble Ready powersports and motorcycles for sale at great prices. If you want to trade in your current ride for an upgrade, then just submit your scooter, ATV, dirt bike, or any other powersport vehicle for a free Cash Offer, and you can have a used motorcycle shipped right to your door with no hassle!

All Rumble Ready powersports and used motorcycles for sale come with a full Condition Report, are shipped straight to your doorstep as-promised or your money back, and with a 90-Day Mechanical Guarantee! Read more about online trades here!