America’s Finest: What Are They Riding When They Serve?

It takes a special kind of person to be a police officer. You need to be mentally and physically strong to begin with. The danger aspect is very real, too. It’s the kind of job that isn’t for everyone. These men and women deserve the utmost respect, and they certainly get it from me.

I’ve often wondered about the vehicles they use daily. To be more specific, those lucky few who get to ride motorcycles while on the clock. Why does a police officer ride a motorcycle? Do they get to choose what they ride on any given day? There are several questions I’ve always had that will be answered today. Without further ado, let’s get to it.

Submit your vehicle for a free RumbleOn Cash Offer today!

RumbleOn is THE easiest way to sell a motorcycle for cash or trade in any vehicle online!

Motorcycle history: when did police officers start using them?

Interestingly, motorcycles were introduced to the law-enforcement world in the early 20th century. The history of Harley-Davidson coincides with the first motorcycle strictly used for policing purposes. In 1908, the Detroit Police Department was the first customer, and it has remained a part of their police unit since then. A few hundred miles to the south, the Evanston, Illinois police department purchased a belt-driven motorcycle for its first motorcycle police officer in 1908, too. In 1909, the Portland, Oregon Police Bureau had an officer that used his personal bike to patrol the city. 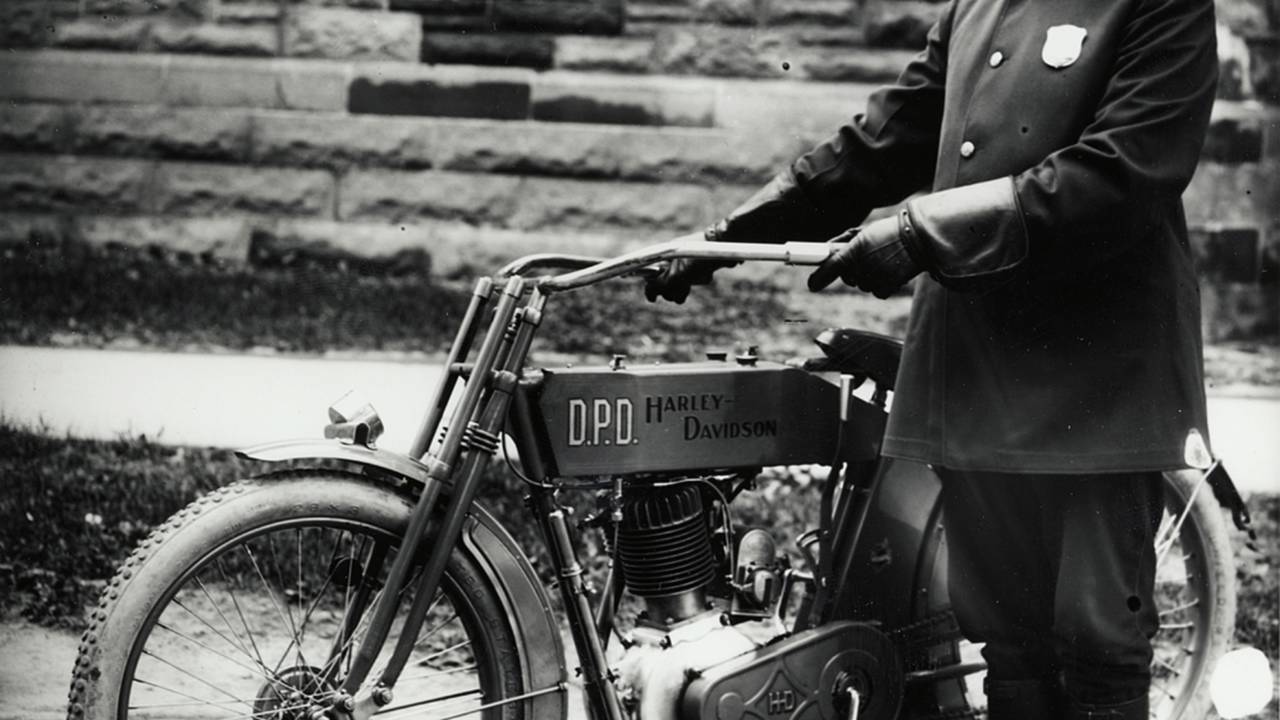 Officer in the Detroit Police Department with a Harley-Davidson in 1915, Photo Source: RideApart, courtesy of HD Archives

These first police models were pretty bare compared to today’s motorcycles. They were nothing more than civilian bikes with distinct police markings. They didn’t have sirens or flashing lights either.  By the 1930s, the use of motorcycles as police vehicles grew. It makes sense because the public began using motorcycles as an inexpensive alternative to automobiles. Motorcycles are now a staple in most police departments across the country.

“Decisions, decisions. Do I use the patrol car or motorcycle today?”

It’s not like that at all, really. You don’t get a choice to drive the patrol car one day then hop on a motorcycle the next. Riding is a special assignment that’s usually dedicated to traffic enforcement and special events. Those special events most often include parades and security for dignitaries.

In order to even be considered for motorcycle duty, an officer must complete “motor school,” which may not seem like it’s a tough task, but it is rather challenging. The failure rate is quite high, and competition is fierce. If you’re new to the police force or plan on applying to be a motorcycle officer after graduating from the academy, sorry ‘bout ya. New recruits aren’t eligible until they complete their two to three year probationary period within the police department. The California Highway Patrol is generally acknowledged as having the best police motorcycle training in the country, maybe even the world.

Usually, a police officer is allowed to ride a motorcycle to and from work. The elements are usually the only complaint you’ll hear from a motorcycle officer. There is really only one instance where a motorcycle cop can opt to drive a patrol car for the day. If there is rain, snow or other precipitation in the forecast, the bike can stay off the road. There are numerous safety issues associated with riding in the elements, and police officers don’t take that risk.

The next time you’re on a drive and happen to see a motorcycle cop, be sure to give them a wave. They brave the elements for our safety every day, and it doesn’t go unnoticed. Plus, they look really cool when they’re riding, too!

What part of motorcycle history would you like us to cover next? Leave a comment and let us know!

We want to say thank you to our heroes.

If you’re a hero, we want you to know how much we appreciate your sacrifice. Police officers, firefighters, EMTs, and American military service members will receive a $500 eGift card with any bike they purchase. We care about our heroes and we want them to know how much they mean to us all and our freedom. Sacrifice isn’t overlooked. We honor our heroes!