We always love to see when kids show an early passion for motorcycles, and this story begins with a video that captures a biker in the making. The video, which shows a 6-year-old boy named Robbie leading a ride for a group of friends riding their Triumphs and Harleys, was posted by online personality Shadetree Surgeon, otherwise known offline as Josh.

Buy used motorcycles for sale from our 100% online inventory.

RumbleOn makes it so easy to shop used motorcycles for sale, you can browse our massive selection of powersports from your favorite recliner. Find your dream ride today!

“Our group has all known each other for years, and we've been a hard-partying, hard riding pack of assholes forever,” he explained. “But as time marches on, we all start to grow up just a little bit, and some of the group has children. The way I see it, it was a bit of an initiation of our own group’s next generation of riders.” 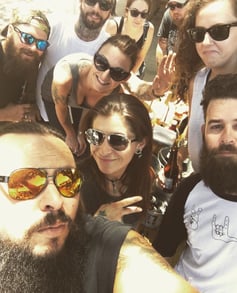 Josh explained that the ride was about making Robbie an integrated part of the group. “I'd love to see our group dynamic extend past just us and get passed down to our children as well.”
Robbie, who is a typical kid who enjoys video games, camping, and helping his Dad in the workshop wrenching cars, can be quite shy at times. As soon as he gets on his bike, though, it’s a whole new ballgame, and Robbie lights up with joy and enthusiasm. “It seems like one of the few places he can completely let go,” Josh said. “It ended up being a real treat for him to be included with all the grown-ups even if it was only for a block.” 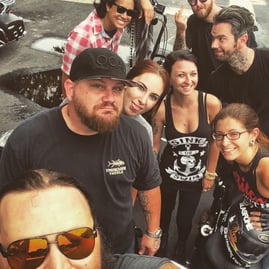 A Community Center for Bikers of Every Background
The same enthusiasm that Robbie shows toward the bike life is one that Josh wishes to instill into bikers of all types. His current mission: to establish a community center that encourages bikers to come together and share their passion. The end goal that Josh envisions is a place where novice riders can learn to work on their own bike, “a community center to organize events from and much more,” he explained.
“With the motorcycle community center, I’m trying to create a space for people, especially new riders, to come together,” he said.
“I want to create a place where everyone is welcome. Where egos are checked at the door; where veteran riders can help novice riders and pass down all the skills and knowledge they've accumulated over the years. Whether this be riding skill or mechanical skill, I want to have a space where both are available.”
Josh explained that the idea of such a center grew from his feelings on how there is so much social pressure and cliques from different groups of riders. With the die-hard separation into separate groups, such as riders of sports bikes or cruiser guys and the like, a lot of new riders feel as if they don't belong anywhere.
“Or, even worse, they feel as though they have to conform to a certain social standard in order to be accepted,” he said. “One of the big things I'd like to see is the demolition of these stupid stereotypes of people who ride different classes of motorcycles. In our group, you'll find a wide variety of different bikes and different riders. If we're going to make America a better and safer place for motorcyclists, we need to come together as one. We're all going to the same place, we're just sailing different ships,” he said. 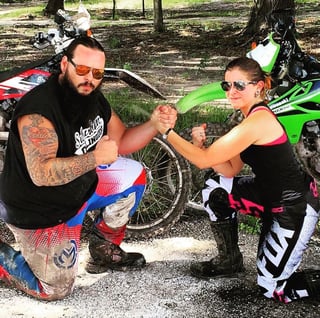 Just as the video that featured Robbie the 6-year-old biker, Josh explained that the video channel is “kind of acting as a bit of showcase for what [the center] could be: friends from all different motorcycle backgrounds coming together as one to wrench on bikes, introduce new riders to the sport, and plan group events,” he said.
“We all help each other out, and that's something I'd like to bring to a brick and mortar space. It was just kind of the natural evolution of our group hanging out that the idea sprung from. Wanting to add more people to it and how we would accomplish that. I can't take personal credit for it, it's definitely more of a groupthink type thing,” he said.
“It's not an original idea, there's plenty of places that do something similar. Essentially, we want to bring what we have in all our friends’ garages and mix it with the party we all have when we're out riding and make that into a space that everyone can enjoy.”
However, in order to make this dream a reality, it takes money, and fundraising is in the works for Josh. As of right now, he said the goal is to bring enough attention to the Shadetree Surgeon video channel that it pays for the community center.
And, while a Patreon campaign has been set up to help raise funds, Josh further showed his love and concern for community by stressing that contributors shouldn’t put themselves in financial stress on his behalf.
“We're trying to build something cool,” he said. “But I don't want someone to support that at harm to their own financial status know what I mean? I tell anyone who thinks about donating first to take a look at their own bank account. If it's not where it should be, they should take whatever amount they were going to give to me and set up an automatic monthly draft to their own savings account. ”
In place of donations, perhaps assistance may be offered in another way from the community. When asked about the name for the Center, Josh said, “Ah, my own personal hell is naming things. No, I don't have a name for it.” He laughs. “But I'm open to suggestions, ‘cause I SUCK at that sort of thing.”
Have an idea as to what the Community Center should be called? Leave a comment and help Josh out!
Buy motorcycles from RumbleOn with total confidence!


We know how frustrating it can be trying to find the perfect ride on other motorcycle listing sites, but, at RumbleOn, we have an impressive inventory of used powersports for you to choose from. We'll fill out all the paperwork and deliver your new ride right to your doorstep! No more hassle, no more haggling, no more headaches. Shop used motorcycles for sale today, we guarantee satisfaction!