The World's Most Expensive Motorcycles

Just as motorcycles come in all different shapes and sizes, they also come with very different price tags attached to them. The price of a bike doesn’t necessarily correlate to how good the bike is, either. But depending on the brand, the style, the year, and the rarity of the bike, there are motorcycles out there with a price tag that will make you cringe. Seriously.

The humor behind those insanely high price tags is because they’re that outrageous for a reason: there’s someone out there willing to pay the asking price tag. And while I'm not in the practice of judging people too harshly, I’d be lying if I said it didn’t sometimes blow my mind how much someone is willing to pay for a bike. As previously mentioned, an expensive motorcycle doesn’t always mean it’s superior.

Want to trade for a new ride? Trade in and get a motorcycle shipped right to your door!

The Dodge Tomahawk V10 Superbike: $700,000
This bike...I don’t even know what to say about this bike. I mean, it looks like something Arnold would ride on in the Terminator movies, and based on the price of the bike, I had assumed that was the case. No, this bike might not have that cool of a history behind it, but its price tag suggests that enough people firmly believe that it’s a showstopper in its own right. But the big surprise for most people isn’t even about the price tag, but rather the brand. It seemed to surprise everyone when they found out the American brand Dodge created this Tomahawk, because honestly, who even knew that Dodge built motorcycles?
Video Source: Panos Emanon YouTube

Well, the key is that they don’t, and they really only created it to prove they could. And I have to admit, this thing looks fun to ride because it’s really like nothing I’ve ever seen before. It uses a V10 four-stroke Dodge Viper engine (yowza!), and that really makes this thing a monster. And it’s, really fast. This bike can reach 60 mph in just 2.5 seconds flat, so this bike isn’t for the faint of heart.

The Tomahawk really makes a statement, because it just doesn’t look like a motorcycle at all, but operates like one that’s on steroids. I can’t claim that this bike is comfortable, because...well... just look at it. It’s not exactly the definition of riding in comfort, but then again, I'm not exactly sure what family this bike fits into. It’s a crazy bike with a crazy engine and an even crazier price tag.

The Harley Davidson Cosmic Starship: $1.5 Million
Okay, this one doesn’t surprise me, as Harley motorcycles can tend to be a bit on the higher end of the price range. What makes that Harley Cosmic Starship a whopping $1 million? Because of the bike and the paint job. First, it’s a Harley, which is one of America’s most beloved bike brands because of its rich roots and history in American culture. Second, because the individual that painted the bike is a well known artist. The bike was painted by a man named Jack Armstrong, whose "cosmic existentialism" paintings typically sell anywhere from $300,000 to $3,000,000.
Photo source: Wikipedia 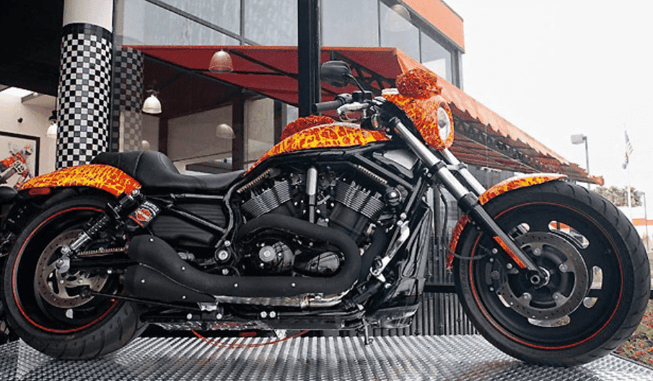 Now, I feel like I got into the wrong profession, here.  I feel like I'm probably capable of painting the same thing Armstrong did for a hell of a lot cheaper. But, art is art, and this motorcycle had fanatics throwing their money at whoever would collect it. An additional rarity is added to this bike because this has been, and will be the only motorcycle that Armstrong will paint. When he was asked about Harleys in general, he said: “For me as an artist, Harley is James Dean, Brando, Elvis, and Steve McQueen and is more American than ice cream.”

While I might not be a fan of his artwork, I do have to agree with that last statement. This bike is one hell of an attention grabber, probably because of the bright traffic sign colors, and seeing this thing driving down the street must be an experience within itself.

The Yamaha Roadstar BMS Chopper: $3 Million
The BMS Chopper is something odd, yet beautiful. I think that THIS is what art looks like. The design of this thing is something on a whole other level, and I can appreciate the hours and creativity that must have gone into making this bike. This motorcycle is much more of a looker than anything else, so the person to buy it would be something who’d rather have it glossed up and beautiful in their motorcycle collection. In other words, this bike comes across as much more of collectors buy than an actual ride, but that’s something I can get on board with.
Video Source: TheRichest YouTube
The bike lies flat on the ground, so it’s bound to have a lot of people questioning if it even rides. But it does, because what’s the point of an expensive bike that can’t actually move? It becomes a sculpture, a moving art installation, and that’s not what I'm about. It has a single-sided swingarm rear suspension and air-ride system that can lower it to the ground or lift it 10-inches. But the reason for the $3 million price tag isn’t just because it looks damn cool, as that’s not a good enough excuse. The real reason is in the paint. And in case you weren't already shocked, it's gold paint.

Yep, that’s right; this bike is decked out in about 24-karat gold. Again, that’s just another reason why this bike was made more for the model-appeal than for actual riding. I have plenty of awesome bike options for actual riding, so I really do appreciate innovation. I love it when people go out of their way to create something crazy.

The reason  this bike has such a staggering price tag is that of its age, rarity, and racing history, which seems like a better reason for the expense.

This bike manufacturer, AJS, comes from a background of incredibly rich racing history. This bike is rare, too, as there’s only four of them that exist in the world. AJS hit some financial issues that inhibited them from creating any more than that\, which is a large reason as to why the price tag is the way it is. There’s a huge selection of people that claim this bike is one of the most beautiful, graceful, and innovative bikes in racing. That’s a really big title to live up to, but if the price  is this steep, I must live up to it.

The Neiman Marcus Limited Edition Fighter: $11 Million
This...I don’t even know how to feel about this. The reason? It was created by a high-end, yuppie department store. Yeah, you heard me right. The creator of this bike is none other than Neiman Marcus, who has absolutely nothing to do with the automotive or motorcycle industry. I'm confused.

The Limited Edition Fighter is a neat looking bike, because it’s very steampunk like. The kicker for this ride is that, while it may not look like you should be driving it on the road, it’s completely street legal. When it comes to head turners, this one meets that expectation. It’s just so simple and bare-boned, and I do have to hand it to Neiman Marcus (I'm still SO confused) on how they created this bike. It’s as if they decided to just get down to the roots of what makes a motorcycle a motorcycle, all while adding an... interesting...flourish of style.

Instead of trying to hide the foundation of the bike, as a good many motorcycles do, Neiman Marcus figured out how to work with it. Now, I can’t promise that this bike would be really fun to ride on, at the seat looks pretty questionable when it comes to comfort, but this ride is pretty damn cool. I’ve got to give it to Neiman Marcus, they may be a department store and have almost no business trying their hand in the motorcycle industry, but I can’t deny how unique the look of this bike is. And for that, I'll give them some applause.

Who knows, maybe this won't really turn into a wish list, but it could maybe come in handy for a most-expensive motorcycle trivia quiz one day.

Comment down below and let me know your favorite and least favorite on this list. Do you think any of them are worth the price?