The History of Kawasaki Ninja Motorcycles

The History of Kawasaki Ninja Motorcycles

The Kawasaki Ninja: an assassin of the road and bold enough to create a culture and fan-following all its own.'Ninja' describes the family of Kawasaki sports bikes that came into being in 1984 with the GPZ900R. Since then, the performance of the Ninja has become legendary, and various models have carried the Ninja name onto the road everywhere.

Trade in for a Kawasaki motorcycle the easy way, get your free cash offer.

Want to trade for a Kawasaki? Use your free cash offer as a motorcycle trade-in value!

The story of the Ninja sportbike is full of innovative technology developments and Kawasaki’s obvious determination to create an ultimate motorcycle. Since 1984 when the Ninja was released, the bikes have rocked the world with a name that is as recognizable as that famous, once thought to be cursed, Kawasaki lime green in sport, supersport, and supercharged models. Sport, Supersport, and Supercharged models Here is the timeline of the beloved sportbike, the Ninja.

1984: The Ninja GPZ900R was Kawasaki Motorcycles' first liquid-cooled, dual overhead camshaft, 16-valve 4-cylinder engine that came packaged in a compact and light chassis. In 1984, when sales first started, the Ninja was the talk of the time. Numerous magazines dubbed the Ninja “Bike of the Year” that year, and it took the top spot as the fasted bike in the world when it slammed the speed record with a top speed of 250 km/h. Its distinguishing side-drive cams, unique full fairing, and diamond frame earned it distinguishing popularity. 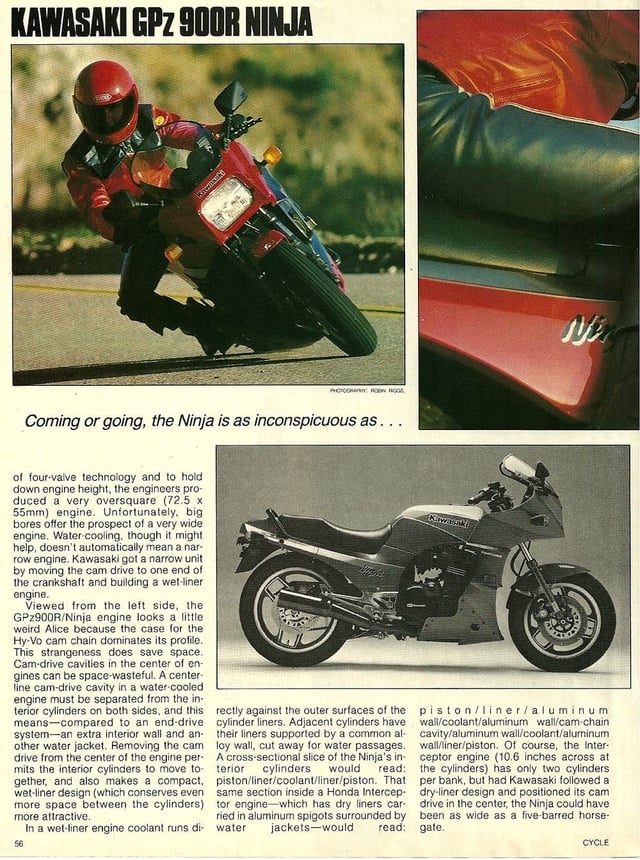 1985: In 1985, the world witnessed the birth of the 600 Class. The Ninja 600R burst onto the scene as the first middleweight to offer a modern-designed perimeter-style frame and aerodynamic performance in the engine and chassis. Its gusto rivaled larger-displacement bikes, and it is often credited as the creator of the 600cc Supersport Class.

1988: The Ninja ZX-10 guaranteed Kawasaki’s spot as the fastest motorcycle in the world in 1988. Its top speed of 270 km/h came from its 997cc engine combined with its lightweight and ultra-rigid aluminum e-BOX frame.

1989: In 1989, the Ninja ZX-7 was released with the styling of the ZXR-7 works racer. The Ninja ZX-7 had a liquid-cooled, dual overhead camshaft 16-valve in-line four engine and a twin-tube aluminum frame. Its performance at the time set a whole new standard for the 750cc class of machines.

1990: In 1990, the ZX-11 hit the market with the first Ram Air System in the world. The “King of Speed” as it came to be known, showed that Kawasaki had once again found a way to maximize power. The Ninja ZX-11 was the founder of the “flagship” category, and this monster bike was the first to feature a speedometer that reached 320 km/h.

1993: The ZX-11 would see many technology upgrades with the 1993 Kawasaki ZZ-R1100 featuring a lighter aluminum perimeter frame, and upgrades to the Dual Ram Air Induction.

1994: The Ninja ZX-9R came around in 1994 and featured an engine that captured all the best qualities of the ZXR750 but with more displacement, an aluminum frame, and twin Ram Air intake. The Kawasaki ZX-9R set a standard in the sense of balance of size, handling, and power, and took supersport high-performance to yet another level.

1996: The Ninja ZX-7R, along with the limited 7RR, were race-developed in the sense of performance and reputation. In 1996, the bikes featured shorter-stroke engines and redesigned aluminum perimeter frames.

2000: In 2000, the ZX-12R became the flagship model of the supersport Ninja Series and featured the first mass-produced aluminum monocoque frame and an aerodynamically crafted chassis. The advanced technology in the liquid-cooled, dual overhead camshaft, 16-valve in-line four engine gave it intense power, and the Ninja ZX-12R was the successor of the previous “King of Speed,” the ZX-11.

2003: The Ninja ZX-6R and ZX-6RR was the rebirth of the supersport middleweight class in 2003. These bikes were designed to be the quickest circuit bikes in their class with the ZX-6RR made to race, while the ZX-6R was for street riding. The next few years would see the sixes made faster, smoother, and quicker, with the ability to become off of the most potent middleweights out there.

2004:  The year 2004 was the 20th anniversary of the O.G. of the Ninja family, the godfather if you will, the GPZ900R. That year, the legend was reborn with the ZX-10R. As Kawasaki’s new liter-class supersport model, the ZX-10R had an incredible power-to-weight ratio with all the power of a 1000cc supersport machine with 600cc dimensions. The ZX-10R won the title of “Master Bike” two years in a row and won many supersport shootouts around the world.

2006: The Ninja ZX-14 arrived in 2006 as the bike with Kawasaki’s most powerful engine yet. The sculpted bodywork and aerodynamic aluminum monocoque chassis were designed to deliver the best in supersport riding. Also in 2006, Ninja 650R was born, and the ZX-10R was refined to enhance its performance on the track. The bike didn’t lose any of its maximum power but instead featured adjustments to its cornering performance and an all-new aerodynamics package.

2007: In 2007, the Ninja ZX- 6R replaced the previous sixes with a totally new machine for the first time in a decade. It was ultra-compact with a powerful engine, mass centralization, and a rider-responsive chassis. The redesigned six was all the benefits of a lightweight small-displacement machine with all the qualities of a larger-displacement machine.

2008: The Ninja ZX-10R gained a new engine that featured more high-rpm horsepower without the loss of low- and mid-range torque. The bike had race-developed technologies that also improved upon its frame and ergonomics. This same year, the Ninja 250R was designed for riders of all levels. It had a compact chassis that was easy to ride, A carbureted model was released in the US, while a fuel-inject model was released in Europe.

2009: Kawasaki builds upon the 2007 Ninja ZX-6R but with a little more track-focused performance. The weight of the six was reduced, and the chassis was fine-tuned in order to make this a machine with lighter handling. The engine provided a much stronger mid-range with precise throttle control and feel at all rpm.

2011: An improved Ninja ZX-10R was released this year, and its enhanced performance was designed to dominate in superbike racing.  The ten had a more powerful engine in a lighter, more compact chassis. This same year, the “fun bike” Ninja 400R was born, and the Ninja 1000 was released to be a more versatile sports bike. It had a relaxed riding position, adjustable windscreen, and rider-responsive handling with an aluminum twin-tube frame among other features.

2012: The Ninja ZX-14R underwent some upgrades and became a powerful yet controllable machine for both sport-riding and high-speed cruising. The displacement was increased to 1,441cc, and the 14R became the model with the highest displacement in the series. Also in 2012, the middleweight all-rounder 650R was improved upon with a slimmer shape and sub-frame that allowed smaller riders to reach the ground easier.

2013: The new Ninja ZX-6R increased its engine to 636cc for more torque, while the Ninja 300 was released as a successor to the popular 250R in select markets.

2014: More changes and improvements were made to the Ninja 1000 and the Ninja 400 with upgrades in power and compact design, while the Ninja  250SL was released as a lightweight, single-cylinder Ninja.

2015: The Ninja H2R was released as a closed-course product of the Kawasaki Group’s combined technology and was designed to be the ultimate sports model machine. The H2R featured a supercharged 998cc in-line four engine that delivers over 300 PS. The bike had intense acceleration, and so its stability was carefully engineered to withstand the ultra-high speed range.

2016: The Ninja ZX-10R was released in 2016 to be the closest thing to a world superbike champion machine. The 2016 model was tried and tested by Kawasaki’s race-team and was designed to have even higher race-winning potential. The ten’s 998cc in-line four engine crankshaft had a lighter moment of inertia and, along with better frame geometry, the 2016 10R could handle stronger acceleration out of corners, increased performance, and sharper handling.

The Ninjas continue to improve their solid base of the Ninja line. Kawasaki development always starts at the track, and we’ve learned with every tweak and adjustment, we can expect the same solid technology, sharp looks, and all-around power as part of a package deal.

What is your favorite Ninja? Let me know in a comment!