Meet the Jarvish Helmet: Motorcycle Technology of the Future

The Smartest and Safest Motorcycle Helmet

I’m not sure about you, but when Marty McFly’s images of what the future would hold didn’t come true, I was a bit peeved. Where are the flying skateboards I was promised in Back To The Future, or the clothing that could dry itself? What about the sneakers that lace themselves up, all on their own? These were things I’ve been waiting for, and because the movie is so nostalgic, I assumed when I got that stuff, the future was here.

And while we don’t quite live the life of McFly, at least, not yet, that doesn’t mean that technology hasn’t advanced itself in others ways. But, sometimes it doesn’t seem like those achievements have merged into the motorcycle industry.

Sure, we have bikes that are equipped with engines that are better than ever, electric motorcycles, and bluetooth motorcycle helmets, but nothing that really hits the “technology” nail on the head. At least, that was until now. While there are endless entrepreneurs and brands that are funneling money into creating the next best bike, there are companies that are using those resources towards a component that might actually be more important than the bike itself. What could that be? The safety gear. Because we all know that a bike is only as fun as the time you get to ride it. If the ability to ride is taken away from you because of a really bad accident, there’s not much left to enjoy.

Here’s how a company created a motorcycle helmet that gives you everything you could possibly need or want for your riding adventure, all without having to touch it.

I know that some people can be a little apprehensive or scared of new technology, especially if it’s something that they don’t understand.This helmet is out to change the expectations for noggin safety, and if you’re not impressed by it, then I think your expectations are just too darn high!

The first cool thing about this bucket? It can record at a 360-degree wide angle. Why do you need a recording feature? Your safety can be jeopardized by cagers and other riders that aren’t paying enough attention. You’ve probably been  in a situation where a car was driving erratically around you, caused you or your bike harm, but you had no proof that they were totally at fault. This video recording feature will allow you to record anything and everything you want, and can actually help you prove your own innocence if you’re ever involved in an accident. It’s not something that anyone would like to have to deal with, but it feels good to know that the option is there. 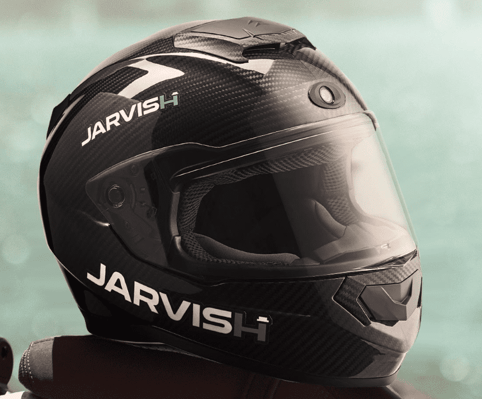 This helmet is voice activated, which means that if there’s anything on it that you want to use, you don’t have to take your hands off your ride to activate it. All you have to do is tell it what to do, and it will do it. It’s iPhone and Android accessible, which doesn’t just mean that you can accept or decline calls with this helmet, but that you can achieve all the basics that a phone can. That means you can access the weather forecast for the area, local gas stations, food stops, rest stops, and more.

The battery operation can last up to 5.5 hours when you’re recording the entire time. If you’re not recording, the battery can last longer than that. And in case the priority of safety wasn’t evident enough already, the battery is Military grade Lithium, which means that it’s anti-explosion. It’s not something you will ever have to worry about, in the case that you’re in an accident. It’s there to help, not harm.

In regard to the video recording components, the helmet has a crash sensor. This means, if the helmet detects any kind of impact, the helmet will start recording and save that file into a “black box” area, so that you can easily access it later if you need to. If you are in a crash, it also has a sensor that will immediately dial the number of your choice during the emergency. So, even if the accident is a bad one and you’re unconscious, you know that there’s contact being made with emergency services or family.

It’s waterproof, comfortable, and made of a carbon fiber composite material. It has GPS navigation to get you where you need to be and will even tell you the speed that you’re going. This helmet is the perfect combination of functionality and fine details, and if you’re looking for an impressive piece of safety technology that will totally change your riding experience, this is it.

This might be a little much for some riders, it’s true. Even if this helmet gives you a safer riding experience, it might not be what certain people are looking for. But if you are looking for a new safety helmet that will elevate your riding to a level you’ve never experienced before, try this one on for size! It won’t prevent you from looking like the traditional bobble-head, but with all the cool features, I probably wouldn’t  mind one bit!