The Timeline of Kawasaki Motorcycles

The Timeline and History of Kawasaki Motorcycles

More than half a century ago, Kawasaki started their full-scale production of motorcycles that would soon become world famous.  From their first motorcycle engine design that was garnered from their experience developing and producing aircraft engines, Kawasaki has been known for bringing new technologies, speed, and power to consumers in innovative ways. This can be seen within the history of Kawasaki. Many of their models helped shape the market, and created motorcycle legends in the process, and laid claim to an iconic shade of green. But how did Kawasaki get their start?

Here is a timeline to show the history of Kawasaki motorcycles and help illustrate just how the Kawasaki standard came to be.

Want to read up on the history of Kawasaki Ninja or Vulcan motorcycles? We've got that covered, too.

Want to trade for a Kawasaki? Trade online and get the new motorcycle shipped to your doorstep! 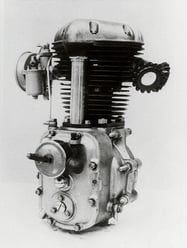 1950: Initially started in 1949 by aircraft engineers, Kawasaki completes their design of the KE-1 motorcycle engine. Mass production of the air-cooled 148 cc OHV 4-stroke single starts in 1953.

1955: The production of the KB-5 motorcycle engine begins in Kawasaki Aircraft Company’s Kobe Plant. This engine had responsive torque at low and mid rpm, and soon earned a strong reputation among riders. This same year, the Meihatsu 125-500 is equipped with the KB-5 engine and released.

1956: The Meihatsu 125 Deluxe, also containing an improved version of the KB-5 engine is released and sets a top-speed record for its category. This Kawasaki also proves its reliability in a separate test when it runs for 50,000 km without breaking down.

1957: An improved version of the popular KB-5 is produced. Stamped on its side is the first-ever Kawasaki logo.

1962: Kawasaki introduces the 125B8. This bike used the most advanced materials available at the time, and prove its durability. The motorcycle was soon named the number one practical use bike.

1963: Kawasaki Motocross bike, the B8M (also known as the Red-Tank Furore) wins the top six positions in the Hyogo Prefecture Motocross Tournament. It soon earned a “fearsome” reputation in the motocross racing circuit.

1966: Kawasaki’s popularity in Japan, especially with the 650cc W1, earns them worldwide recognition. Sales of the 250cc A1 also commence this year. The A1 was the first bike in its class to have an air-cooled, 2-stroke, parallel twin, rotary disc valve engine.

1969: The 500cc H1, otherwise known as the Bronco, is introduced to the market and is known as the fastest machine in its class. The Bronco begins Kawasaki’s Speed King Legend.

1972: Kawasaki launches sales of the 900 cc Z1 overseas. The Z1 was the world’s first air-cooled, DOHC, in-line four engine, and was code-named “New York Steak” during its five-year development. The Z1 reigns supreme as the King of Motorcycles overseas for many years. The domestic version, the 750cc Z2, is sold the next year.

1977: Sales begin for the stylish 1000 cc Z1-R. The bike is a real-style cafe racer and is hugely popular overseas.

1980: Kawasaki releases the first model in the supersport GP lineup that features an oil cooler and fuel injection, the Z1100GP. A year later, in 1981, Kawasaki wins the manufacturer’s title in the 150cc class FIM World Road Racing Championship for the fourth year straight. Also in 1981, the first 50cc sports model is released by Kawasaki, which happens to be the first 6-speed machine in its class.

1983: Kawasaki releases their Voyager, a fully-equipped tourer that features a liquid-cooled, DOHC, in-line six with DFI, shaft drive, full fairing, and many other long-distance features.

1984: The Kawasaki Ninja is released and is soon named bike of the year. The GPz900R is equipped with Kawasaki’s first liquid-cooled, DOHC, 16-valve four-cylinder engine and a compact chassis.

For the history of the Kawasaki Ninja click here!

1985: The Kawasaki Vulcan 750 debuts as the brand’s first V-twin cruiser, the 600 supersport class also comes to be as the GPZ600R makes its entrance as a rival to the larger-displacement bikes.

For the history of the Kawasaki Vulcan motorcycles, click here!

1987: The KS-1 and KS-II go on sale as small-size dual purpose models with air-cooled single engines. These bikes are the first of the “Superbikes Mini Racer” craze.

1990: Kawasaki’s ZZ-R1100, also called the Ninja ZX-11, goes on sale. This is the first Ram Air System to ever hit the market and gives way to the “flagship” category of bikes.

1991: Kawasaki’s naked sports model, the 250cc Balius, is introduced along with the classic sports model Estrella.

1993: Kawasaki updates the Ninja ZX-11 to feature Dual Ram Air Induction, a lighter aluminum frame, and larger front disc brakes. The Ninja ZX-11 carries on the legacy of its predecessor as the new king of speed.

1994: The company continues to dominate the track by winning the FIM Endurance World Championship series as the manufacturer’s champion. The ZXR750R is named the “Endurance King.” This same year, sales begin for the new naked sports bike, the 400cc Kawasaki ZRX, and the Ninja ZX-9R supersport model.

1998: The Ninja ZX-9R is once again revised to be smaller, more compact, and powerful. Kawasaki also throws their style back to a retro look with the “new nostalgia” W650.

2000: The new millennium flagship model of Kawasaki’s supersport Ninja series, the ZX-12R features the first mass-produced aluminum monocoque frame and advanced technology that is unique to the 1200cc bike.

2002: The ZZR1200 is released as an evolution of the ZZ-R1100 superbike. The newest model combines sports styling, superbike performance, and touring comfort.

2004: Kawasaki releases the KX250F, their first 4-stroke motocrosser that was jointly designed by Suzuki and Kawasaki.

2006: The Ninja ZX-14 hit the market with Kawasaki’s most powerful engine yet. The supersport bike was sculpted to be aerodynamic, had an all-new frame, and was a superior balance of performance, handling, and speed.

2008: The Concours 14 debuts with supersport technology that comes directly from the Ninja ZX-14. The transcontinental supersport bike features KIPASS, also known as Kawasaki’s Intelligent Proximity Activation Start System, which is the first electronic authorization system in its class. This same year, the Ninja 250R is also released as a compact and easy-to-handle machine for riders of all levels.

2011: The Ninja ZX-10R arrived this year and caused quite a stir for Superbike fans. It was designed to enable more riders to ride a superbike, and a featured a 998cc engine and an all-new cast aluminum twin-spar frame with elements taken from the original 2004 model. The supersport Ninja 1000, street Z750R, off-road KX250F, standard W800, and bagger Vulcan 1700 Vaquero also hit the market this year.

2012: The king of all sports bikes, the Ninja ZX-14R, is released with a 1441cc engine. The bike was touted as the strongest accelerating production motorcycle on the planet. Kawasaki also releases the Versys 1000, ER-6n, Ninja 650, and KX450F that same year.

2013: The boosted Ninja ZX-6R joins the middleweight supersport category, and people everywhere get a glimpse of the most advanced mid-size supersport model Kawasaki had ever produced. The 636cc engine was a step up from its 599cc predecessor, and the new 6R boasted more performance at all rpm as well as great usability in everyday street-riding situations. Also in 2103, Kawasaki released the Ninja 300, supernaked Z250, and updated off-roaders KX450F and KX250F.

2014: This was a busy year for Kawasaki. A special edition Ninja ZX-14R with enhanced performance and appearance, as well as a new Ninja 400 are released. Also debuting: 2014 supernaked Z1000, the first-ever Kawasaki scooter J300, the 250cc Estrella, and large-wheeled dual-purpose KLX150L. Mini-motards KSR PRO, KX 100, and JX85 are also added to the lineup, as is the Ninja 250SL to the 250cc full-fairing supersport class.