Oh no, a fallen Harley! No one likes to see that.

The proper technique to pick up a fallen Harley-Davidson, as any long-time biker knows, is to use your legs. However, it seems that you don’t need to have achieved 'Road Warrior' status to master this technique. This is the case for one three-year-old Alabama girl, whose skill has gone viral.

Shop used motorcycles for sale at RumbleOn with confidence!

Our inventory is full of cheap motorcycles for sale and other used powersports that are just waiting to make their road debut with you. Buy your next motorcycle from RumbleOn right now!

3-year-old Bailey Hensley of Mobile, Ala. is shown in a viral video mastering an advanced technique used by adults to pick up her pink mini-Harley. The video, filmed by Bailey’s grandmother, Alisa Hensley, has gone viral in the past 24 hours.

After all, it’s not every day you see a pair of three-year-old twins with a genuine love of motorcycles. Yet, little Bailey Hensley has commanded the spotlight for her and her twin brother, Adien Hensley, who also loves spending the day riding around the yard on his mini Harley-Davidson motorcycle. They received the bikes on their third birthday, in April 2017. Bailey’s ride is a darling pink, Aiden’s a daring black and white police cruiser, and, together, they rule the yard and sidewalk at a cool 5 mph.

That’s a pretty mean speed when you are three years old. But, no worries, these kiddos have it down. (And they know all about helmet safety!)

Alisa Hensley, the twins' grandmother, said she and her husband have been riders for about ten years, and that she recently got her own Harley, a Softail, about three years ago. Since they have grown up around motorcycle culture, Bailey and Aiden have grown to love motorcycles so much that Alisa decided they should each have one of their own.

“They just love riding around out there,” Hensley said. “Both of them. Bailey is a bit more cautious in how she rides, but Aiden is going all for it. But they do it all the time.” 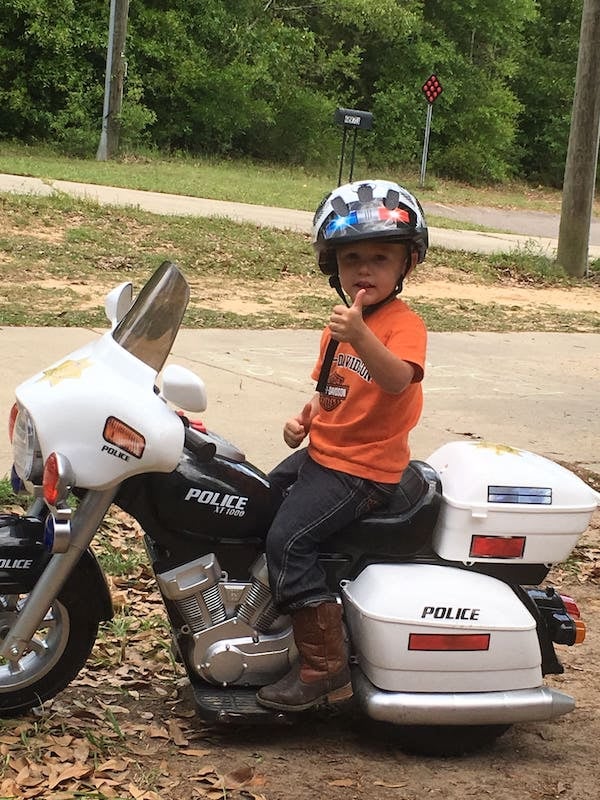 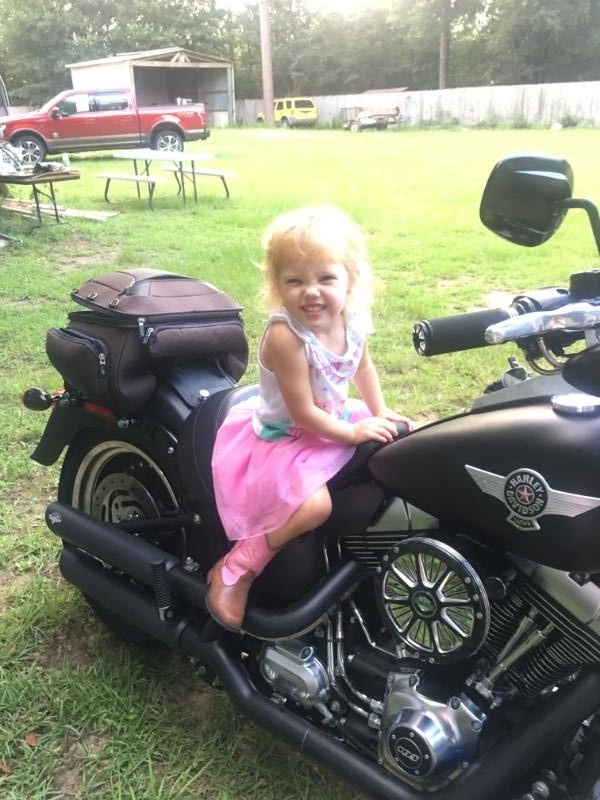 Three-year-old twins Aiden and Bailey Hensley show just how much they love to ride.

For Bailey and Aiden, their familiarity with the rumble of a hog runs deep as their grandparents each own a Harley. The twins' love of motorcycles has existed almost all their lives, and when they aren't playing outdoors or watching their favorite Mickey Mouse television program, they're riding.

“We sometimes ride around the block with them,” Hensley explained. “They’ll be on the back of the bike while I follow on an ATV, real slow.” While they certainly aren't afraid of life on two wheels, caution is first and foremost for these young ones, as Bailey responsibly portrays in the video.

“I couldn’t believe it,” Hensley said about Bailey picking up her bike in a grownup fashion. “I only taught her how to do it once, and there she was doing it on her own.”

In the video, Bailey Hensley, clad in a pink tutu skirt and pink cowgirl boots to match her pink cruiser, squats next to her fallen Harley before confidently pushing upward with her legs. As is critical to the technique, Bailey correctly straightens her tailbone and lifts the bike. She then grins for a moment before riding off into the backyard. Surprisingly, the video is her first time trying the technique. It’s impressive, and the Internet agrees.

“After I got the video, her bike laid down again. I told her to go pick it up, and Aiden says, come on BB, I’ll help you.” Little Bailey stood her ground about what she was taught and emphatically insisted that she knew how it was done.

The video was first posted to a closed Facebook group for women riders. After the positive reception of the heartwarming hog-handling child, Hensley said she thought, “Maybe I should post it to our local HOG chapter. They might enjoy it.”

The technique of using one’s legs to pick up a fallen motorcycle is a learner’s requirement before riders earn their motorcycle license. Motorcycle safety instructors even appear at various national motorcycle club events to reinforce that “It’s all in the legs.”

Finding a used motorcycle for sale at a reasonable price can be a hassle, unless you're using RumbleOn. Not only is our selection of used powersports extensive, it's all online and you can shop from the comfort of your favorite recliner! Never has it been easier to find your dream ride and have it shipped straight to your door. Not to mention, all of our vehicles are covered by a 3-Day or 150-Mile Money Back Guarantee, meaning you can shop with total confidence. Buy your next ride today!