Types of Motorcycles: What is a Dirt Bike?

What is an off-road motorcycle, anyway?

If you find yourself staring out the car window at the landscape and daydreaming about the adrenaline of tackling the hills and dirt patches, and pulling some sweet dirt bike tricks, then you need to get yourself a dirt bike or other off-road vehicle today. They are a bottomless supply of adrenaline, and near heart attacks, all packed into a tiny, lightweight frame. What’s not to love about small motorcycles?

Is a dirt bike a motorcycle?

Dirt bikes are a type of non-street-legal motorcycle that lack road-safe equipment, like most off-road specific vehicles. They lack the headlights, brake lights, and mirrors that a dual-sport would have but on the upside, you don't have to get a special license for them because of this. They are equipped with small engines, small gas tanks, and stiff suspension to help you soar over jumps and move through a trail with little impact on the spine or bones. They even come in a tiny 50cc size for the younger riders to learn.

There are 8 different types of dirt bikes and while they share the same general idea, they all have different specialties when it comes to what kind of riding you are about to do.

Motocross dirtbikes are considered high performance due to their bigger engine size and modification to the frame because of the jumps and corners, which can be hard on other types of dirt bikes. A motocross engine can vary from 125cc to 450cc.

Trail dirtbikes are the most common type. They have a large gas tank than motocross and are designed for a medium to longer riding distance. A trail dirt bike engine can vary from 125cc to 350cc.

Enduro bikes are similar to both motocross and trail bikes because they are made for distance, speed, and tough terrain. Enduro bikes are made to tackle the elements such as water, rocks, and wooded areas. Enduro bikes have more technology for upgraded performance to handle tough tasks such as climbing over hills or fallen trees. The engine size for a single-cylinder 2-stroke between 125cc and 360cc, or 4-stroke between 195cc and 650cc. Larger engine size doesn't always mean better performance when it comes to an enduro bike.

Dual sport dirt bikes are the best of both worlds if you are looking for a street-legal bike to take out, but also want to maybe go off-roading and get some adventure time in during your trip. They have all the components of a motorcycle, including headlights, a larger gas tank, and larger engine size.

Not to be confused with a trail bike. A trail bike is used to test a rider's ability and skill. There's no seat to it, the bike has a small gas tank, and the frame is light for maneuverability. Many enduro riders have used trails bikes to train.

Hill climb bikes look unlike any of the other bikes named. It has an extended swing arm so that you don't flip over when going up hills. The back tire usually has very large knobs for finding traction, and the frame is also light to easily move around. 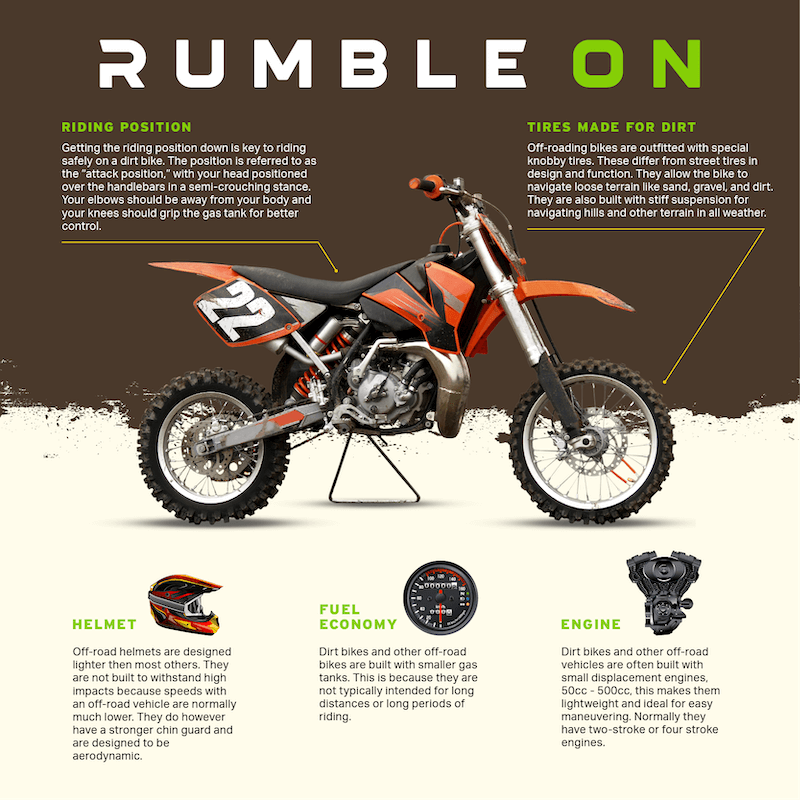 If you've read this far, it's clear that you are interested in dirt bikes. So, what are you waiting for? Go get one!

Buy or trade a motorcycle online and get it shipped right to your door with RumbleOn!

RumbleOn welcomes trades of all kinds! Get a cash offer for a vehicle online, then use your trade-in value toward the purchase of your new bike, scooter, or another powersport vehicle!