Types of Motorcycles: What is a Touring Motorcycle?

Introduction to Motorcycle Types: What is a Touring Motorcycle?

Motorcycle touring is one of the many pleasures in life and what better way to experience the hobby than with a bike built for just that? While there are many different kinds of motorcycles, touring bikes take the cake when it comes to amenities and mastering the long-distance riding experience.

Touring motorcycles are built for touring the wide open road, obviously, but this means that they are often big bikes with very powerful engines. This is because many people who ride farther distances need to be able to bring luggage and even have a passenger. The stronger engine and bigger size allow for these things. This size, however, does make it a challenging bike for newcomers. The weight and power of a touring motorcycle tends to make them more difficult to manage.

Get a free cash offer and use it to trade for a touring motorcycle!

Want to trade for a new ride? Need fast cash? Trade in for a tourer or sell a motorcycle for cash to a ready buyer!

Tap the infographic to zoom in! 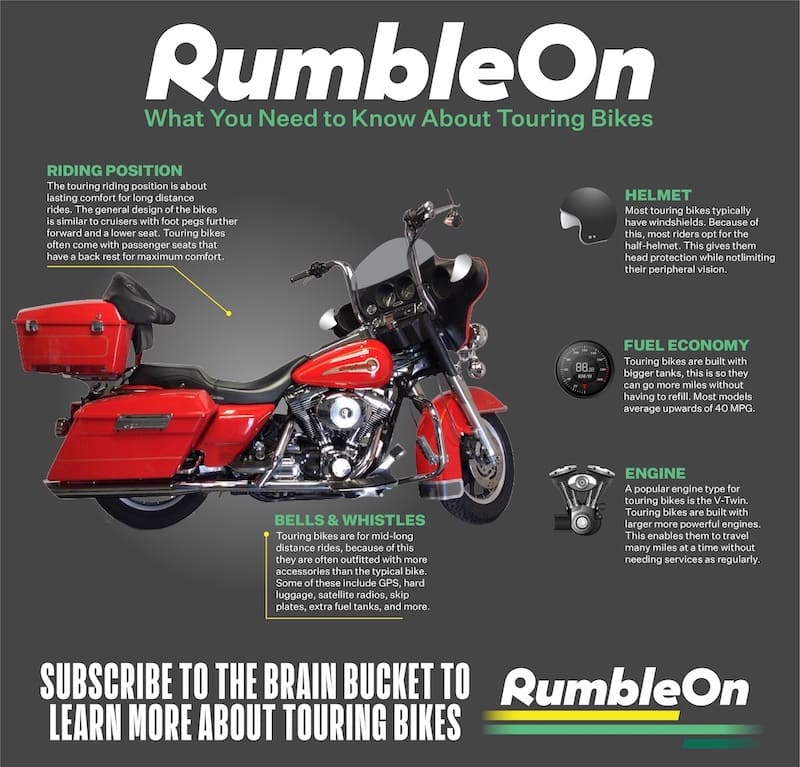 Of the touring bikes, one of the most famous models is the Honda Gold Wing. It’s what most people picture when you bring up touring motorcycles, and the model has been around for almost as long as the touring family itself. Among other popular models are Harley Davidson Electra Glide, Ducati Multistrada , Kawasaki Vulcan, and Yamaha Star Venture.