Why Santa Should Trade His Reindeer for Horse Power

When it comes to the holidays, depending on your experience with this magical time of year, you’ll associate it with something. Some people might think of all the sweets and good food, others might think of all the different gifts they can claim, while others just enjoy the sense of magic in the air. It’s a time to come together; it’s a time for happiness. But, it’s hard to be happy when you think about the kinds of mistakes Santa has been making for years.

Now, just hear me out on this. Santa is supposed to be this mystical being that is the only person we let break into our houses once a year, and he’s full of all kinds of magic. But I’ve been seriously considering his choice of transportation, and I’ll admit, I’ve become judgmental of those choices. If you’re so magical and have more power than anyone can imagine, why aren’t you making better choices?

Has no one thought to sit Santa down and have a conversation with him about his image? Don’t get me wrong, I love animals as much as the next person, but his transportation choices are becoming less and less practical. It’s time to seriously think about how things can improve because I’m all about making Christmas the best as it possibly can be. 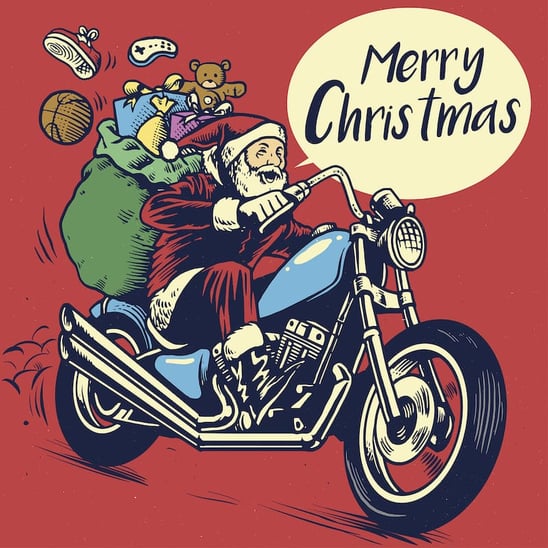 So, with that, here are just a few reasons as to how Santa can benefit from switching in his reindeer for some slick, fast, and rumbling motorcycles:

A headlight is more reliable than Rudolph’s nose

While I’ve got nothing against the red nose reindeer that has launched endless Christmas movies (and seems to be Santa’s favorite), I don’t really think he’s the right leader. Don’t get me wrong, I think he’s a great image for the jolly man in the red coat, but Santa can never guess what kind of weather conditions might be in the forecast. When you consider that, you’re going to want a light that can power through fog, rain, and snow. The only thing that can do that well? The headlight of a motorcycle.

Maybe if they could dance, it would be worth it. But, to the best of my knowledge, they don't. I don’t know if you knew this, but reindeer are actually very high maintenance animals. Actually, I have no idea what I’m talking about, but they look high maintenance with their shiny coats and pedigree. The reality is that Santa probably wastes a large sum of money to make sure his team is fed. But if he had motorcycles, he would just have to worry about filling them up with gas, which might actually be less expensive. It’s a win-win situation.

Motorcycles don’t get sick or moody

Hey, when you’ve lived a high-class life like one of Santa’s magical reindeer, you’re probably a little more than spoiled and expect a heavy dose of vacation days. You know what never wants a vacation from the ride? A motorcycle. That won’t get sick on you and demand to have a day off, and they won’t be moody about potentially having to ride in less than stellar weather. They just want to enjoy the freedom of the ride, and that makes them the perfect means of transportation.

It’s an opportunity to come up with better names

I’m not going to sit here an start insulting the names of the reindeer because I’m not going to be that person. But I’m also not going to pretend I’m blind to how weird some of them are. While it’s too late to change their names, it’s not too late to replace them all together and come up with new names for your new rides. Motorcycle names are almost always significantly better than any other kind of name because the sky is the limit with them. If Santa feels like he’s dropped the ball when naming his reindeer, replacing them with motorcycles means a second chance at making things right.

The only accidents motorcycles make are oil spills

It doesn’t matter what kind of animal it is, it’s dirty. They’re not exactly awesome at holding their bladder. But motorcycles are so easy and other than easily handled things like oil leaks, you don’t have to worry about them making a huge mess. Life is a simple existence with iron horses, and when you have to zoom around the world delivering presents to everyone on the planet, you can benefit from a little simplicity in your life.

Sure, you’ll have to fill them up with gas and wash them every once in a while, but if a stray carrot is left in the middle of the road, you don’t have to worry about them stopping to eat it. Reindeer love carrots and pretty much any herbivore dish that can be considered edible, which means you’re much more likely to run into problems with them. You can always rely on motorcycles though!

Santa is already cool, but it kind of comes with being this magical being that has the power of deciding what you will and won’t get for Christmas. But could you imagine Santa flying through the sky with motorcycle leading his sleigh of toys? I can, and it’s an image I think belongs on every Christmas book cover out there. We could give him a pair of sunglasses, a great bandana, and an awesome red leather motorcycle jacket with his name embroidered on the back. He’s already got the boots down, too!

While this doesn’t seem likely to happen in the future, the beauty is that you get to enjoy riding your own iron horse, regardless of whether or not Santa Claus does. We’re just trying to make his life a little easier and a little more eventful. Happy Holidays!

Don't be like Santa, trade in your reindeer for a used motorcycle!

RumbleOn is the best and easiest place to sell a motorcycle for cash, or trade in for a new ride!

Don't have the cash on-hand to buy a motorcycle? Online trading is easy with RumbleOn! We welcome trades of all kinds, and we also have a full inventory of Rumble Ready powersports and used motorcycles for sale at great prices. Just get your free cash offer to use as your trade-in value! Read more about online motorcycle trades here.